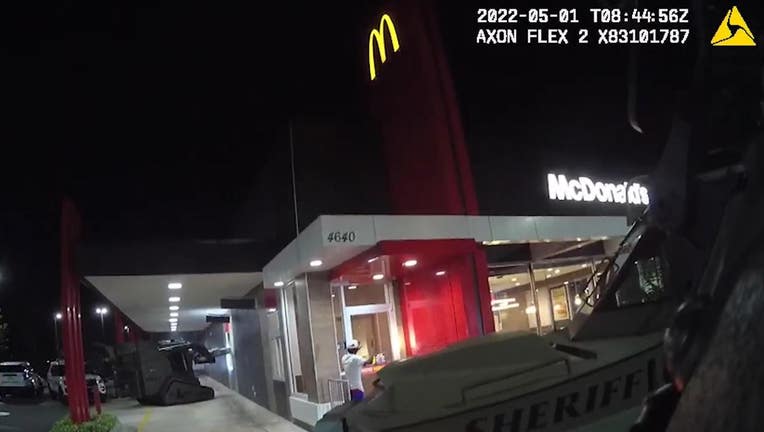 Photo via digital screengrab from the Orange County Sheriff's Office

The woman eventually surrendered and was booked into jail on various charges. No deputies were hurt.

In the pre-produced video released Wednesday by the Orange County Sheriff's Office, deputies can be seen with their guns drawn attempting to talk to the woman through one of the restaurant's drive-thru windows. Authorities later identified the woman as 30-year-old Shandricka Warren.

"Drop the gun. Come out with both hands up in the air," a deputy is heard on video saying. A minute later, what appears to be a single gunshot is heard, apparently from inside the restaurant.

"She's shooting! She's shooting!" another deputy is heard saying in the video, before saying that he is going to return fire. Three Orange County deputies then begin shooting into the drive-thru window.

Deputies were first called to the restaurant near South Orange Blossom Trail and Holden Avenue around 10:30 p.m. on April 30 for a report of an armed robbery. Once on scene, Warren began threatening employees and customers inside the restaurant and started shooting, authorities said.

Six hours later, Warren surrendered, which was also captured on video. Body camera video shows Warren coming out of the restaurant with her hands up just before 5 a.m. that Sunday, and she was detained.

Warning: The video below includes strong language and graphic violence.

Authorities said Warren was arrested on a warrant for burglary in a structure with assault with a firearm. She has since been charged with three counts of aggravated assault on a law enforcement officer with a firearm, Orange County Sheriff's Office said.

Because deputies were involved in the shooting, The Florida Department of Law Enforcement is investigating, which is standard protocol. All three deputies who fired their weapons have been placed on paid temporary administrative leave pending an internal investigation, which is also standard in deputy-involved shootings.