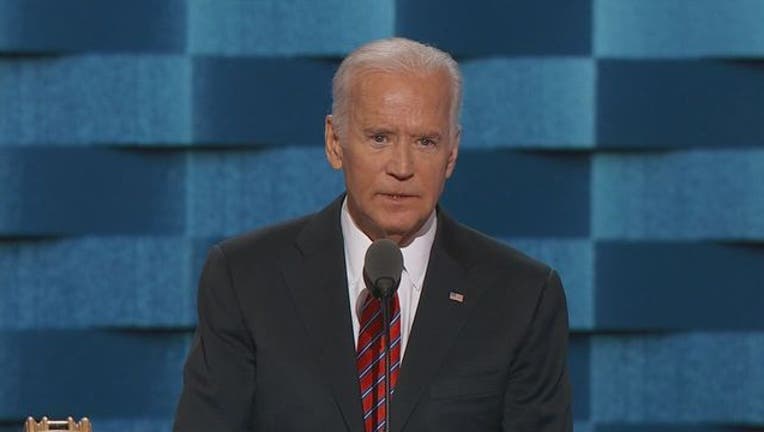 TALLAHASSEE, Fla. (AP) - Vice President Joe Biden said Friday that Marco Rubio's road to re-election is more difficult because of his failed presidential campaign and being on the ballot with Donald Trump.

Biden headlined a fundraiser for Democratic Senate candidate and U.S. Rep. Patrick Murphy before he made a surprise visit to a soul food restaurant that features a breakfast special named for President Barack Obama. While there, he told reporters that Rubio hurt his chances of winning a second term by running for president.

"It makes it a little harder for Marco. He has a campaign he ran, and he said a lot of things," Biden said. "It would have been a much tougher race had he never run for president. And he's going to be carrying a heavy load, not a joke ... with Donald Trump."

He also said Rubio isn't committing to serving his full six years if re-elected and that's not the type of person voters should hire.

But Biden spoke longer about Trump, who easily defeated Rubio in Florida's presidential primary, forcing Rubio out of the race.

"Trump has to win this state by a clear majority in order for Rubio to be able to make it," he said, before criticizing Trump.

Biden said he's willing to give Trump a pass on some of his gaffes because he's a first-time candidate whose background isn't in politics, but it's the tone of the campaign that upsets him.

"He's very proud of having made famous the phrase 'You're fired,'" Biden said. "No one every takes pleasure in that, just generically. He doesn't seem to have any empathy. ... It's kind of hard to convince people that he really cares about their circumstance."

It was the third time Biden has campaigned in Florida with Murphy, who is facing U.S. Rep. Alan Grayson in the primary. The race is being watched closely as Democrats try to win back control of the Senate.

Murphy is still largely unknown in Florida. Kiera Hawthorne, 26, said she knew little about him before the visit to Olean's Cafe, but she's now planning to vote for him.

The Rubio campaign didn't directly respond to Biden's comments, instead choosing to resend a press release issued before the restaurant visit that said, "Today's visit is yet another indication of national Democrats trying to prop up their preferred candidate and his struggling campaign."