Friday night was the first night people could go to a bar since the coronavirus lockdown took effect. But in Orlando, the bars had to close early.

Friday night was the first night people could go to a bar since the coronavirus lockdown took effect.

But in Orlando, the bars had to close early.

With bars now open, Casey's on Central in Downtown Orlando was packed, or as packed as it could be while maintaining 50 percent capacity.

"It’s just wonderful... See all the people around... People are having fun. There’s energy back downtown, finally," said Keith Ingersoll, of Orlando.

"Seventy-nine days is a long time to be shut down for a small business, so we’re excited to finally get a chance to open the doors and get back to doing what we do," said Casey's owner Jeff Ekas. 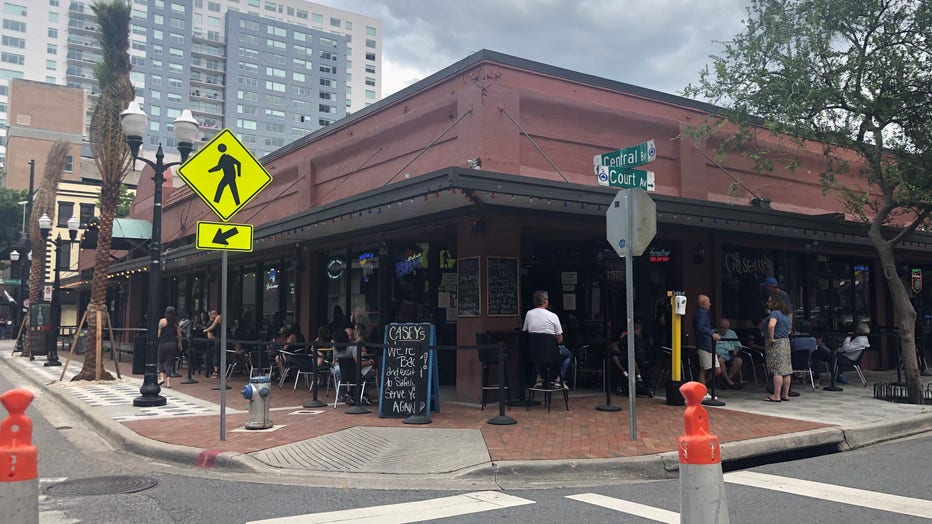 They were so excited that Ekas opened the doors four hours earlier than normal.

"Our motto was, 'You can’t drink all day if you don’t start in the morning,'" Ekas said.

They also opened early, in part, because they had to close early to abide by the 8 p.m. downtown curfew in place because of ongoing protests.

"We were happy to get the news on Wednesday that we’d be allowed to open. Unfortunately, the curfew news came in right after that, so that dampers things a little bit," Ekas said.

"I think that’s sad for the businesses that are just trying to re-establish themselves," said Jamie Hunsinger, of Orlando.

The bar is now re-established with sanitation stations, employees wearing masks, and one employee's sole focus on sanitizing the bar, tables and doorknobs.

Patrons don't mind as long as they can grab a drink.

"We’ve been doing things as they open, so we’re rejoicing with the openings."

Earlier this week, Orlando Mayor Buddy Dyer said he would re-evaluate the curfew on a daily basis.

Casey's is planning to keep its adjusted 12 p.m. to 8 p.m. hours throughout the weekend.

But in other counties, the party continues late into the night.