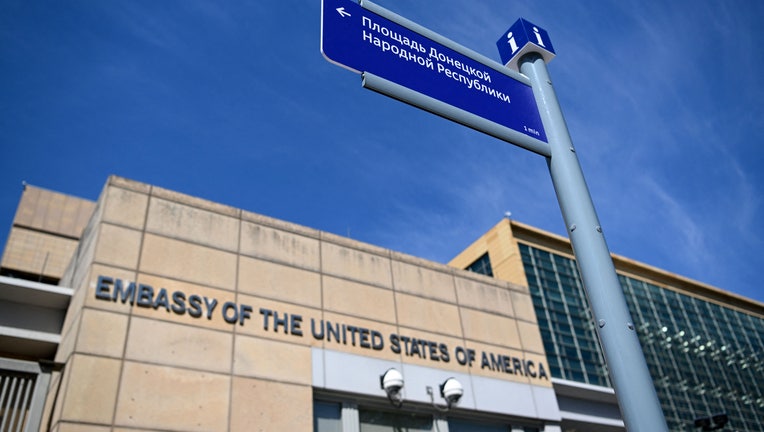 Picture taken on June 30, 2022 shows a street banner read as "Donetsk People Republic's square" in front of US embassy in Moscow. (Photo by NATALIA KOLESNIKOVA/AFP via Getty Images)

MOSCOW - The U.S. Embassy in Moscow has issued another security alert for Americans in Russia, warning them to depart "immediately while limited commercial travel options remain."

The embassy cited the ongoing partial mobilization in Russia for the war in Ukraine.

"Russia may refuse to acknowledge dual nationals’ U.S. citizenship, deny their access to U.S. consular assistance, prevent their departure from Russia, and conscript dual nationals for military service," it said.

An Aug. 15 security alert from the embassy warned that Americans could be harassed in Russia and have difficulty obtaining consular assistance.

Tens of thousands of Russian men have fled in the week since President Vladimir Putin announced a mobilization to bolster struggling Russian forces in Ukraine. Although Putin said the callup was "partial," aimed at calling up about 300,000 men with past military service, many Russians fear it will be much broader and more arbitrary than that. There are numerous reports of men with no military training and of all ages receiving draft notices.

Airline tickets to the limited number of countries still accepting flights from Russia sold out quickly despite steep prices, and long lines of Russians trying to escape continued to clog highways out of the country on Wednesday. Moscow reportedly set up draft offices at borders to intercept some of them.

The embassy warnings come as Russia moves to annex parts of Russian-occupied Ukraine that held Kremlin-orchestrated referendums on living under Moscow’s rule. Armed troops had gone door-to-door with election officials to collect ballots in five days of voting, a move that’s likely to prompt more sanctions from the West.