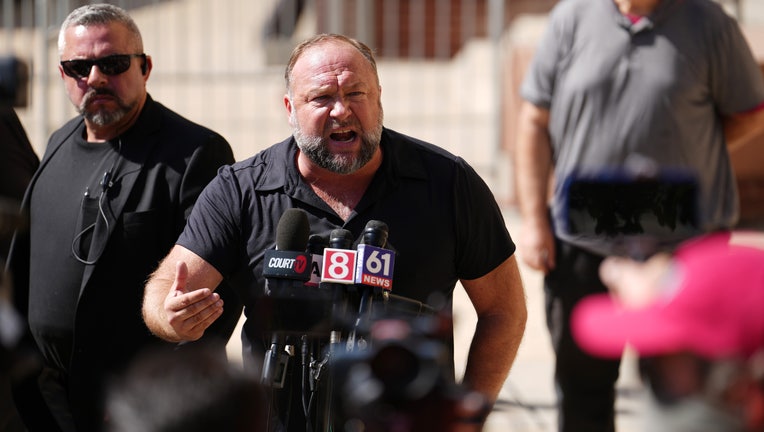 InfoWars founder Alex Jones speaks to the media outside Waterbury Superior Court during his trial on September 21, 2022 in Waterbury, Connecticut. (Photo by Joe Buglewicz/Getty Images)

WATERBURY, Conn. - Conspiracy theorist Alex Jones took the stand Thursday at his defamation trial in Connecticut as he and his lawyer try to limit damages he must pay for promoting the lie that the 2012 Sandy Hook school massacre was a hoax.

More than a dozen family members of some of the 20 children and six educators killed in the shooting also showed up to observe his testimony in Waterbury Superior Court, which is about 20 miles away from Newtown.

Jones has been in Connecticut this week in preparation for his appearance. He held a news conference Wednesday outside the courthouse, bashing the proceedings — as he has on his Infowars show — as a "travesty of justice" and calling the judge a "tyrant." He made similar comments on his way into the courthouse Thursday, indicating he may invoke his Fifth Amendment right against self-incrimination and not answer some questions.

"This is not really a trial," he said. "This is a show trial, a literal kangaroo court."

Plaintiffs attorneys began by asking Jones whether he believed Judge Barbara Bellis was a tyrant and whether he calls a lot of people tyrants.

Several victims' relatives, meanwhile, have given emotional testimony during the trial about being traumatized by people calling the shooting fake, including confrontations at their homes and in public, and messages including death and rape threats. The plaintiffs include an FBI agent who responded to the shooting and relatives of eight of the victims.

Bellis last year found Jones liable by default for damages to plaintiffs without a trial, as punishment for what she called his repeated failures to turn over documents to their lawyers. The six-member jury only will be deciding how much Jones and Free Speech Systems, Infowars' parent company, should pay the families for defaming them and intentionally inflicting emotional distress.

Bellis began the day going over with Jones the topics he cannot testify about — including free speech rights, the Sandy Hook families $73 million settlement earlier this year with gun maker Remington (the company made the Bushmaster rifle used to kill the victims at Sandy Hook), the percentage of Jones' shows that discussed Sandy Hook and whether he profited from those shows or a similar case in Texas. 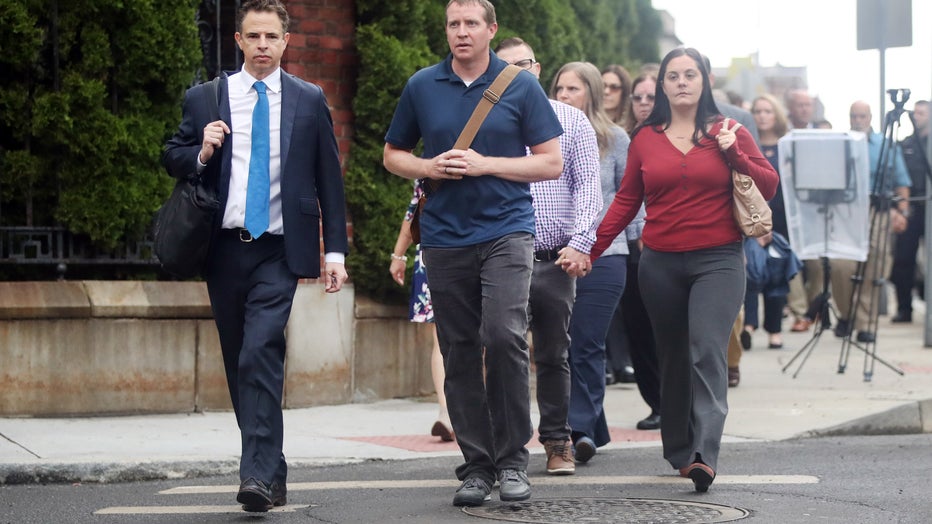 Families of Sandy Hook Elementary School shooting victims walk into Waterbury Superior Court with their lead lawyer Josh Koskoff (left) at the start of the trial against Alex Jones who called the 2012 Sandy Hook shooting a hoax, on September 13, 2022

"This is not the appropriate forum for you to offer that testimony," Bellis said. Jones indicated that he understood.

Bellis said in court on Wednesday that she was prepared to handle any incendiary testimony from Jones, with contempt of court proceedings if necessary.

Jones also was found liable by default in two similar lawsuits over the hoax lies in his hometown of Austin, Texas, where a jury in one of the trials ordered Jones last month to pay nearly $50 million in damages to the parents of one of the children killed. A third trial in Texas is expected to begin near the end of the year.

When Jones faced the Texas jury last month and testified under oath, he toned down his rhetoric. He said he realized the hoax lies were irresponsible and the school shooting was "100% real."

"I unintentionally took part in things that did hurt these people’s feelings," testified Jones, who also acknowledged raising conspiracy claims about other mass tragedies, from the Oklahoma City and Boston Marathon bombings to the mass shootings in Las Vegas and Parkland, Florida, "and I’m sorry for that."

Jones had portrayed the Sandy Hook shooting as staged by crisis actors as part of gun control efforts.

Testimony at the current trial also has focused on website analytics data run by Infowars employees showing how its sales of dietary supplements, food, clothing and other items spiked around the time Jones talked about the Sandy Hook shooting. 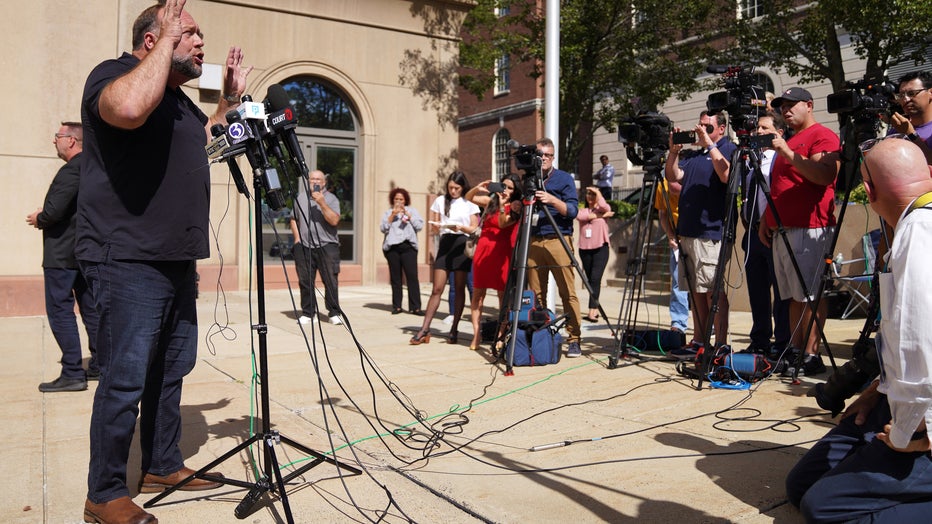 InfoWars founder Alex Jones speaks to the media outside Waterbury Superior Court during his trial on September 21, 2022 in Waterbury, Connecticut. (Photo by Joe Buglewicz/Getty Images)

Evidence, including internal Infowars emails and depositions, also shows dissention within the company about pushing the hoax lies.

Jones' lawyer Norman Pattis is arguing that any damages should be limited and accused the victims' relatives of exaggerating the harm the lies caused them.

The relatives have testified that they continue to fear for their safety because of what the hoax believers have done and might do.

Jennifer Hensel, whose 6-year-old daughter Avielle Richman was among the slain, testified Wednesday that she still monitors her surroundings, even checking the back seat of her car, for safety reasons. She said she is trying to shield her two children, ages 7 and 5, from the hoax lies. A juror cried during her testimony.

"They're so young," she said of her children. "Their innocence is so beautiful right now. And at some point there are a horde of people out there who could hurt them."