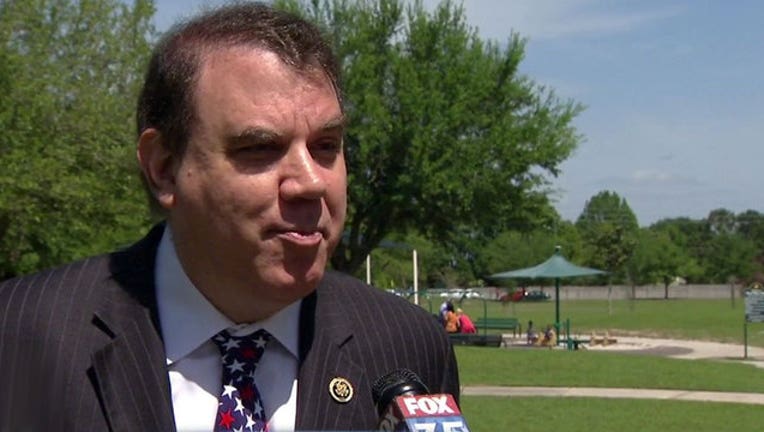 Senate Minority Leader Harry Reid said Thursday that Grayson is an "absolute fraud," adding: "Now having whacked his ex-wife around a few times ... I don't know who supports him other than himself."

Reid has tangled in the past with Grayson, an unpredictable liberal firebrand who is defying Democratic leaders' wishes by challenging their favored candidate, moderate Democratic Rep. Patrick Murphy, in the Aug. 30 Florida primary.

Reid's comments to reporters in Philadelphia for the Democratic convention followed a similar statement a day earlier from the No. 3 Senate Democrat, Chuck Schumer of New York, who is on track to be the party's leader in the chamber next year.

Both parties are contesting Florida fiercely, with Republicans at risk of losing their slim Senate majority in November and Democrats determined to take back control.

"Patrick Murphy and Alan Grayson both face tough questions about their character and credibility," Grayson campaign manager Michael Ceraso said Thursday. "But there's a record that Florida voters can look at, to decide who's truly being honest. This Senate primary shouldn't be decided by outsiders, and their personal attacks."

In the past Grayson has been contemptuous of criticism from Reid and others, dismissing them as members of the "establishment." His attorney earlier this week called the new abuse allegations, first published this week by Politico, "discredited and utterly false."

Lolita Grayson provided Politico with four police reports dating from 1994 to 2014 in which she claimed Grayson abused her often over the years.

Their 25-year marriage was annulled last year after Alan Grayson learned during their messy divorce that she was still married to another man when they wed.

The latest twist with Grayson only adds to Democrats' headaches in Florida, a crucial swing state that they had high hopes of winning when it looked like incumbent GOP Sen. Marco Rubio was going to retire. Instead, following Rubio's failed presidential bid, Senate GOP leaders lured him into announcing late last month that he would run for re-election.

At the same time Murphy has been hit by damaging local press coverage of his business record.

Some Democrats have accused Republicans of meddling in the race to improve Grayson's chances of emerging as the Democratic nominee.

But Reid on Thursday ruled out the possibility of Grayson winning the primary.

"If Alan Grayson won Florida I would be willing to buy you quite a bit, because he's not going to win," Reid said. "I would hope he would just drop out of the race because he can't win."