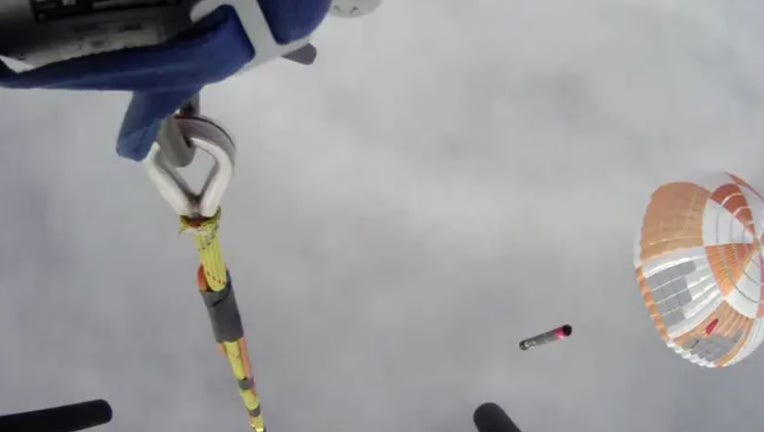 The parachute with a Rocket Lab booster was caught by a helicopter after this photo. It was the first time the company fully tested its recovery method after launching on May 2, 2022 from New Zealand. (Image: Rocket Lab)

After multiple days of uncooperative weather thwarted Rocket Lab's launch plans, the company launched a rocket and successfully caught it with a helicopter as it fell to Earth. The milestone moment was the first end-to-end test of this recovery technique.

Recovering rocket boosters and re-flying the hardware can save millions of dollars. SpaceX has been doing this for years, but the two companies have very different methods for landing their rocket boosters.

Electron launched from New Zealand's Mahia Peninsula just before 7 p.m. ET on the "There and Back Again" mission carrying 34 ride-sharing satellites to orbit.

Rocket Lab's plan involved plucking a rocket booster out of the sky by catching it using a helicopter and parachute system. And the plan worked, on the company's first try.

After separation, the bottom half of the rocket began returning to Earth, performing a series of complex maneuvers to allow it to survey the extreme heat as it re-entered Earth's atmosphere. The rocket was traveling at almost 5,150 mph when it began its descent back to Earth.

There are only a few minutes in the recovery window for the helicopter to use a line and snag the parachute.

"We are all waiting on the edge of our seats," Rocket Lab communications representative Murielle Baker said.

The view from the chopper showed clouds and the line awaiting its catch for several minutes. Then, the orange and white parachute came into view and Rocket Lab declared that it had caught the booster.

"Helicopter catch!" Rocket Lab tweeted after the parachute was seen on the helicopter's camera feed. 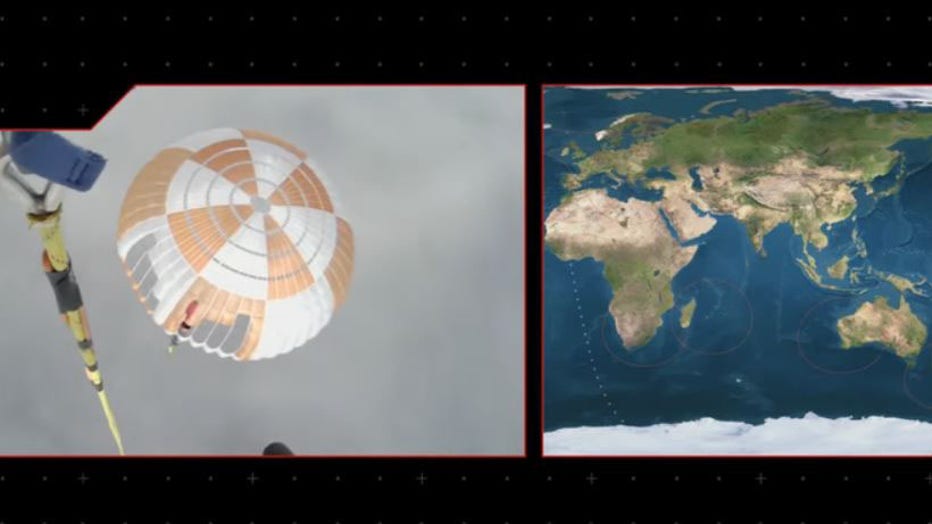 The helicopter was set to carry the booster to a nearby recovery vessel at sea. However, the pilot noticed different "load characteristics" than during tests and made the decision to drop the booster into the Pacific Ocean.

Baker said the booster remained in "great condition" and was picked up by the recovery ship.

"This is a monumental step forward in our program to make Electron a reusable vehicle," Baker said following the capture.

Rocket Lab pushed the launch date a few times due to weather. The company wanted to try on Friday and Sunday, but the weather was not in their favor both times.

"We don't usually give Mother Nature quite so much power over launch timing, but for our first helicopter catch attempt, we want to line up the best possible conditions to give us the highest chance of a successful catch," Rocket Lab tweeted last week. "In time, we'll narrow those bounds."

According to Rocket Lab Communications Director Morgan Bailey, the team is looking to avoid fog and low cloud cover to maximize visibility for the helicopter catch. Once the booster is caught by the helicopter, it will be offloaded to a boat at sea, which requires minimal wave height.

Rocket Lab mounted a camera on the booster and provided views from the rocket as it returned, but the feed quickly cut out.

Get the latest updates on this story at FOXWeather.com.