A fire broke out in a Baghdad hospital on April 24, killing more than 80 people.

BAGHDAD (AP) - The death toll from a massive fire at a Baghdad hospital for coronavirus patients rose to at least 82 Sunday as anxious families searched for missing relatives and the government suspended key health officials for alleged negligence.

The flames, described by one witness as "volcanoes of fire," swept through the intensive care unit of the Ibn al-Khatib Hospital, which tends exclusively to COVID-19 patients with severe symptoms. Officials said the blaze, which also injured 110 people, was set off by an exploding oxygen cylinder.

"I could not have imagined it would be a massive blaze like that," he said. The flames overwhelmed the hospital's second floor isolation hall within three to four minutes of the oxygen cylinder exploding, he said. "Volcanoes of fire."

Most of those killed suffered severe burns, he said. Others were overcome by smoke, unwilling to leave behind relatives hooked up to ventilators. Ahmed said the patients could not be moved. "They would have minutes to live without oxygen."

He said he and others watched helplessly as one patient struggled to breathe amid the smoke.

Widespread negligence on the part of health officials is to blame for the fire, Iraq’s prime minister, Mustafa al-Kadhimi, said Sunday. Following a special cabinet meeting to discuss the blaze, the government suspended key officials, including the health minister and the governor of Baghdad province. Other officials, including the hospital director, were dismissed from their posts.

It took firefighters and civil defense teams until early Sunday to put out the flames.

Among the dead were at least 28 patients on ventilators, tweeted Ali al-Bayati, a spokesman of the country's independent Human Rights Commission, a semi-official body. 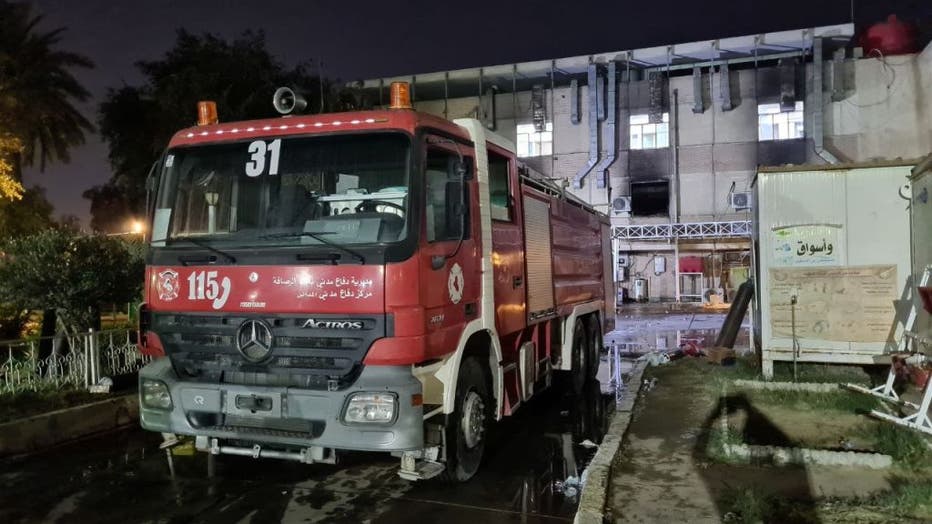 A view of Ibn al-Hatip Hospital as fire erupts at the hospital where coronavirus patients were being treated in Baghdad, Iraq on April 24, 2021.(Photo by Murtadha Al-Sudani/Anadolu Agency via Getty Images)

Paramedics carried the bodies, many burned beyond recognition, to al-Zafaraniya Hospital, where Ahmed said forensics teams will attempt to identify them by matching DNA samples to relatives.

By midday Sunday, relatives were still searching anxiously for loved ones.

"Please, two of my relatives are missing. ... I am going to die (without news about them)," posted a young woman on social media after a fruitless search for her family members. "I hope someone can help us find Sadi Abdul Kareem and Samir Abdul Kareem, they were in the ICU."

Rokya Kareem, 30, was looking frantically for her friend Riyam Rahman, a pharmacist, who was visiting her mother at the hospital. Rahman's mother, Basima, was admitted to the hospital 45 days ago with complications from COVID-19.

"All we know is they were in the room next to where the fire started," she said. "Her phone is switched off, and her family has gone to every hospital trying to find them."

The fire happened as Iraq grapples with a severe second wave of the coronavirus pandemic. Daily virus cases now average around 8,000, the highest level since Iraq began recording infection rates early last year. At least 15,200 people have died of coronavirus in Iraq among at least 100,000 confirmed cases.

Years of sanctions and war have crippled the country’s health sector, and the latest infection wave has tested the limits of health facilities. Security concerns also plague the country as frequent rocket attacks continue to target army bases hosting foreign troops and the seat of Iraq’s government.

The deadly fire was only the latest chapter in Iraq’s poor record for public safety.

In March 2019, over 100 people died when a ferry capsized on the Tigris River near the northern city of Mosul. The boat overturned due to overcrowding and high water. A few months later, in September 2019, a fire ripped through Baghdad’s Shorja market, a major commercial area in the city, burning many shops to the ground.

Part of the problem is that laws and regulations governing public safety and health are old, said Yesar al-Maliki, an adviser to the Iraq Energy Institute. 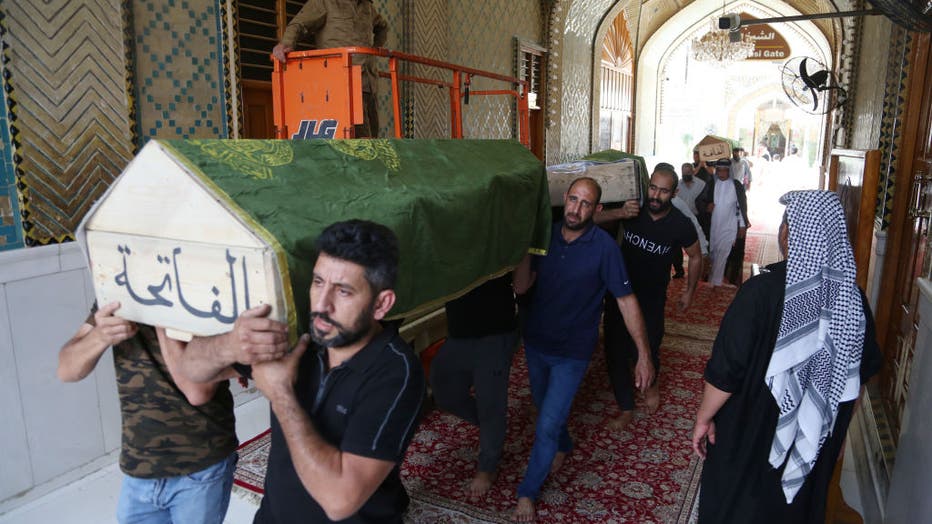 "It has to do with the overall system. There are no detailed regulations and (standard operating procedures) on how to do basic things step by step, especially when handling risky equipment," said Al-Maliki, who also worked in Iraq’s oil and gas industry.

"There needs to be specialists handling policy, regulation and implementation," he said. "If there was a standard operating procedure on how to handle oxygen bottles, especially noticing wear and tear ... This wouldn’t have happened."

The prime minster convened the special cabinet session hours after the flames broke out. In addition to suspending the health minister, Hasan al-Tamimi, and Baghdad’s governor, the cabinet ordered an investigation of the health minister and key hospital officials responsible for overseeing safety measures.

The cabinet also fired the director-general of the Baghdad health department in the al-Rusafa area, where the hospital is located, and the hospital's director of engineering and maintenance, according to a statement from the Health Ministry and the prime minister's office.

"Negligence in such matters is not a mistake, but a crime for which all negligent parties must bear responsibility," al-Kadhimi said Sunday after a meeting.

The United Nations envoy to Iraq, Jeannine Hennis-Plasschaert, expressed "shock and pain" over the fire in a statement and called for stronger protection measures in hospitals.

At the Vatican, Pope Francis, who concluded a historic trip to Iraq last month, remembered those who perished in the blaze. Addressing people gathered in St. Peter’s Square for his customary Sunday appearance, Francis mentioned the news of the dead. "Let’s pray for them,’’ he said.