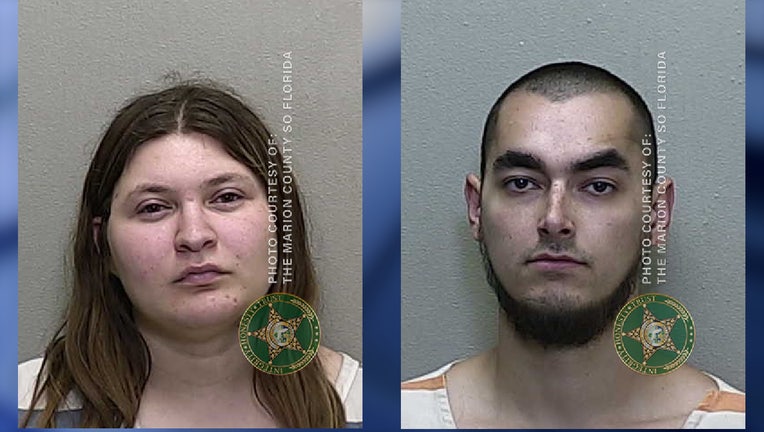 Photos are courtesy of the Marion County Sheriff's Office

Mercedes Cox, 24, and Tyler Hanners, 27, were arrested on two counts of aggravated animal cruelty charges after the two malnourished horses were found at the 16600 block of the southwest 42nd loop in Marion County, deputies said.

8-year-old Cinnamon and 18-year-old Broadway were "severely malnourished igniting an animal abuse investigation, according to deputies.

During the investigation, deputies said it was discovered that both horses had lost a significant amount of weight since they were bought by Cox and Hanners back in June 2022.

A veterinarian who was called to evaluate both horses found Broadway to have a displaced colon, colic from ingesting sand, and a body condition score of one meaning she was very thin. The veterinarian also diagnosed Cinnamon, the other horse, with a heart murmur, heaves, rain rot, and a body score condition of two, deputies said.

Broadway's condition was so severe that the veterinarian recommended medical euthanasia to "prevent further suffering," deputies said. Cinnamon is expected to make a full recovery.

After the investigation, deputies concluded that Cox and Hanners failed to provide adequate food and medical care for the two horses.

Both were booked into the Marion County Jail.