A fearsome Ida has left scores of coastal Louisiana residents trapped by floodwaters and pleading to be rescued while making a shambles of the electrical grid across a wide swath of the state in the sweltering, late-summer heat.

ORLANDO, Fla. - The FOX 35 Storm Team brings you the latest in the tropics.

A fearsome Ida has left scores of coastal Louisiana residents trapped by floodwaters and pleading to be rescued while making a shambles of the electrical grid across a wide swath of the state in the sweltering, late-summer heat.

One of the most powerful hurricanes ever to hit the U.S. mainland has now weakened into a tropical depression as it pushes inland over Mississippi with torrential rain and shrieking winds. Two people have died. 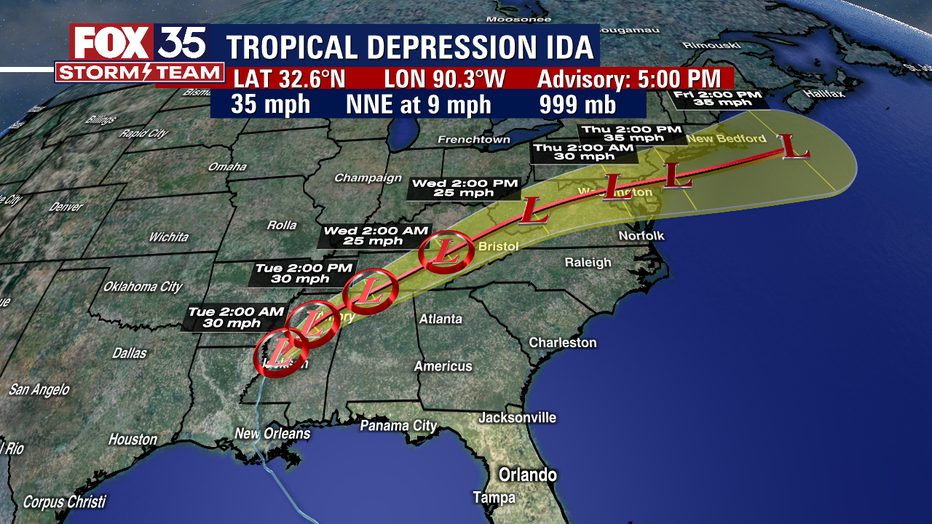 No major flooding was reported inside the flood control system that protects New Orleans. But a million people were without power and officials warned it could be weeks before the grid is fixed.

Ida will continue to turn northeast this evening and is forecast to track across the Middle Tennessee Valley, Ohio Valley and Mid-Atlantic through Wednesday

The storm made landfall along the Louisiana just before 1 p.m. EST on Sunday as a dangerous Category 4 hurricane. it had maximum sustained winds of 150 mph at the time — just 7 mph short of Category 5 hurricane status. 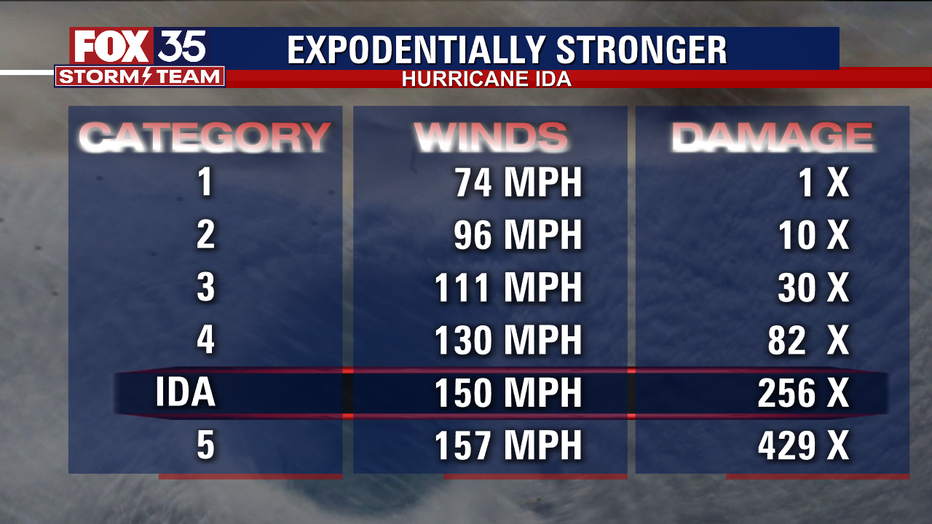 Ida knocked out power to all of New Orleans and inundated coastal Louisiana communities, bringing heavy rain, storm surge, and life-threatening floods to the southeast coast. The storm is said to be responsible for one death already, as someone was hit by a falling tree in Prairieville, outside Baton Rouge, the Ascension Parish Sheriff’s Office confirmed. Rescuers via boat and air are working to reach people trapped by floodwaters. In addition, officials warned it could be weeks before power is fully restored.

At least 1 dead, more than a million customers without power in Louisiana after Ida

Ida, the powerful hurricane that was downgraded to a tropical storm early Monday, left more than a million customers without power, the entire city of New Orleans in the dark, and at least one person dead.

Ida struck the Louisiana coast on the same day that Hurricane Katrina did 16 years prior. Ida’s winds tied it for the fifth-strongest hurricane to ever hit the mainland. 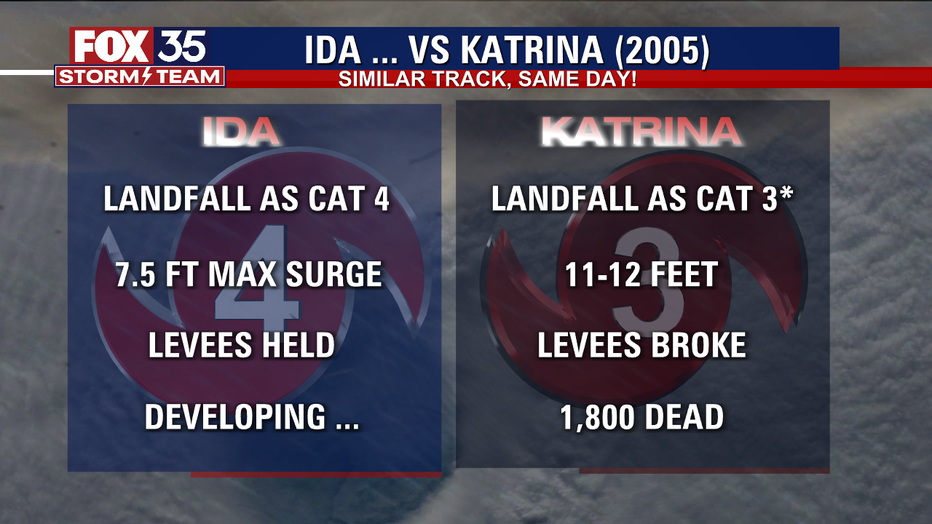 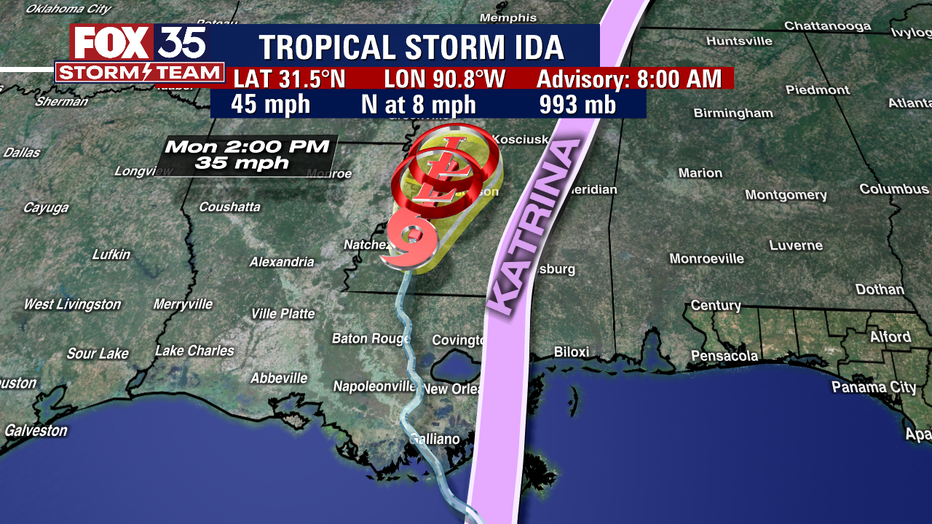 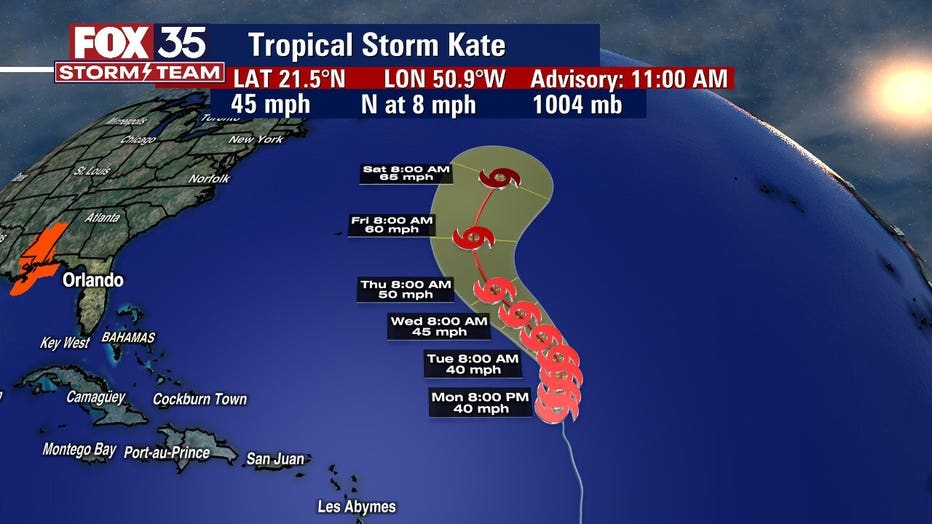 The NHC said that Tropical Storm Kate formed on Monday morning hundreds of miles east-northeast of the Leeward Islands. It is moving north at 8 mph and will do so until turning northwest on Tuesday or Wednesday. It could have some fluctuations in intensity during this time and slow strengthening expected by Thursday.

FOX 35 Storm Team Meteorologist Kristin Giannas said that Kate will stay over the open waters of the Central Atlantic. 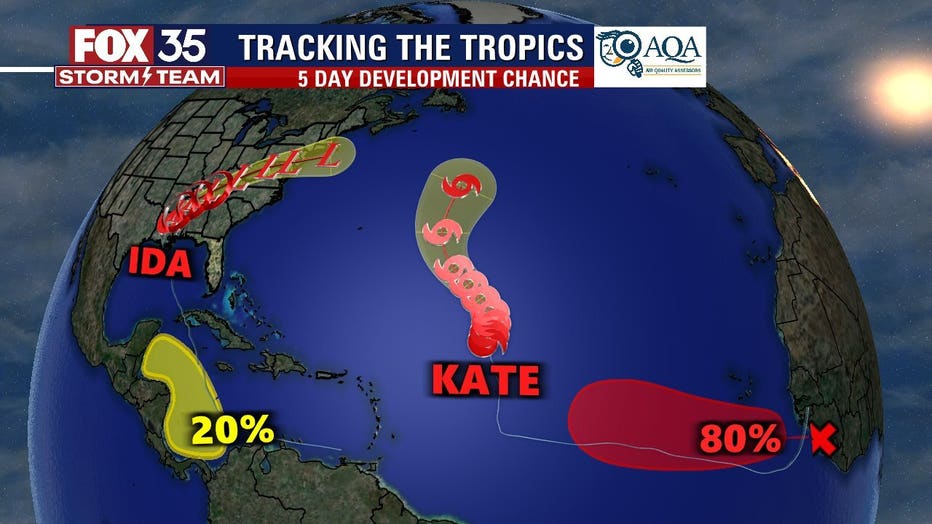 Meanwhile, there are two other disturbances moving through the Atlantic.

First, a tropical wave is expected to emerge off the west coast of Africa on Monday, the NHC said. Environmental conditions appear conducive for further development once the wave moves offshore. A tropical depression is likely to form by the middle or latter part of the week while the system moves west-northwestward. It has a 60 percent chance of formation over the next two days, with those chances increasing to 80 percent over the next five days.

Watch FOX 35 Orlando for the latest updates in the tropics.