Tropical Storm Arthur began moving away from the North Carolina coast Monday after dumping heavy rain as forecasters warned that the first named storm of the Atlantic hurricane season could also bring life-threatening surf and rip currents along the U.S. East Coast.

LAKE MARY, Fla. - Tropical Storm Arthur moved out to sea Monday after dumping heavy rain on North Carolina as forecasters warned that the first named storm of the Atlantic hurricane season could continue to whip dangerous surf and rip currents for another day or more along the U.S. East Coast.

The storm represented another early start for the Atlantic hurricane season. Arthur formed Saturday in waters off Florida, marking the sixth straight year that a named storm has developed before June 1.   By late Monday, storm watches and warnings that had been in effect for parts of the North Carolina coast were canceled.

As Arthur's center passed off North Carolina earlier in the day, a pocket along the coast that includes Newport and Havelock recorded more than 4 inches (10 cm) of rain, according to the National Weather Service. Other areas along the coast saw 2 inches (5 cm) or more, causing some secondary roads to flood. Wind gusts of 40 mph or more (64 kph) were recorded in at least two places on the Outer Banks, the weather service said.

The Hurricane Center said Arthur was moving northeast at 16 mph (26 kph) Monday afternoon as its center pulled away from the U.S. mainland.   At 5 p.m. EDT, the storm's center was located about 110 miles (175 kilometers) northeast of Cape Hatteras, North Carolina. Arthur had top sustained winds of 50 mph (85 kph).

Forecasters said Arthur could strengthen some as it moves away from land but was likely to lose its tropical storm characteristics later Monday or Tuesday.   North Carolina Emergency Management Director Mike Sprayberry said that over-wash or standing water had closed a highway on the Outer Banks and another on the mainland. Other secondary roads had flooded. Otherwise, he said conditions were stable and that no other serious problems had been reported to the state. 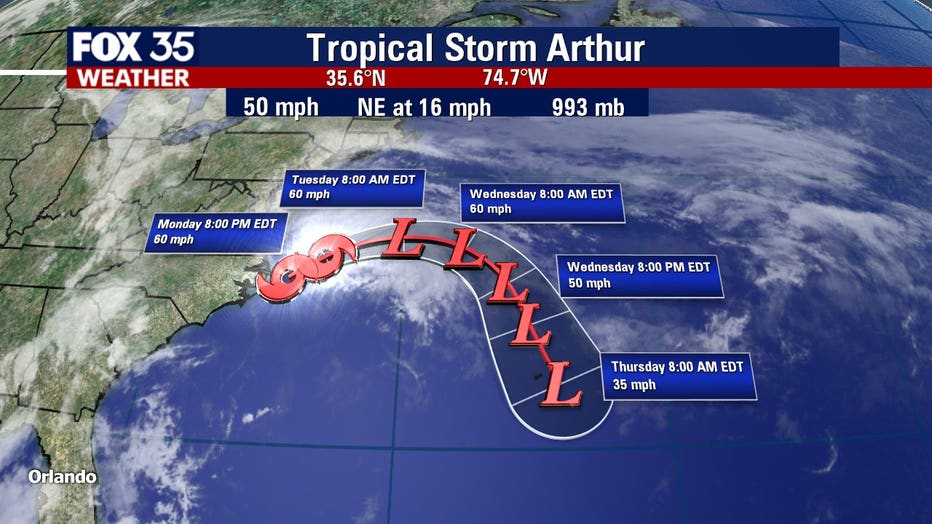 Still, he warned that surf conditions will remain dangerous and advised people to be cautious around the water even as the storm pushes out to sea.

"People in the eastern part of our state should remain cautious, especially while driving in areas where water may collect on roads," he said at a news conference. "Today is not the day to take risks at the beach or in the surf."

Forecasters said rough surf could continue for another day or two.  While other pre-June storms may be influenced by warming waters and climate change, Arthur is more of a subtropical system than a traditionally named storm, said Colorado State University hurricane researcher Phil Klotzbach, who added that its water is cooler than what's usually needed for storm formation.

A lot of these out-of-season storms are weak ones that meteorologists can detect because of satellites and other technology, but comparable storms would have been missed in an earlier era, Klotzbach said.

To get the latest on the tropics, live radar, and daily forecast updates, download the FOX 35 Weather App.