Orlando and Central Florida could see stormy skies late Wednesday evening with forecast models showing some instability in the atmosphere. There is a significant chance for widespread afternoon storms on Thursday

WHAT IS THE WEATHER FORECAST FOR TODAY AROUND ORLANDO?

MAIN WEATHER CONCERNS: Lightning storms with torrential rain will be popping up after lunch with frequent lightning and gusty winds over 60mph. The highest chance for storms in the Orlando metro will be 5 p.m. to 7 p.m. Storms will track southeastward and have no trouble reaching the beaches and potentially severe thunderstorms status, with damaging winds being the biggest threat. Otherwise, the westerly flow brings high humidity, ("swamp flow"), all week.

Another muggy day with storms through the afternoon hours. Rain could be very heavy at times so watch that radar! When thunder roars, go indoors. Highs will climb to the mid-90s so make sure you stay hydrated.

There will be a 60% chance for afternoon storms at the beaches. Waves 1-2 feet, Winds westerly in the morning, shifting to a sea breeze southeast, onshore wind at 15mph. Slight risk for rip currents.

TROPICS: A tropical wave in the western Caribbean Sea off Belize is expected to drift northwest toward the Bay of Campeche and could become a tropical depression or tropical storm in that region of the southwest Gulf of Mexico by Friday or Saturday. 30% chance... No threats to Florida as the circulation would likely drift into Mexico or Texas 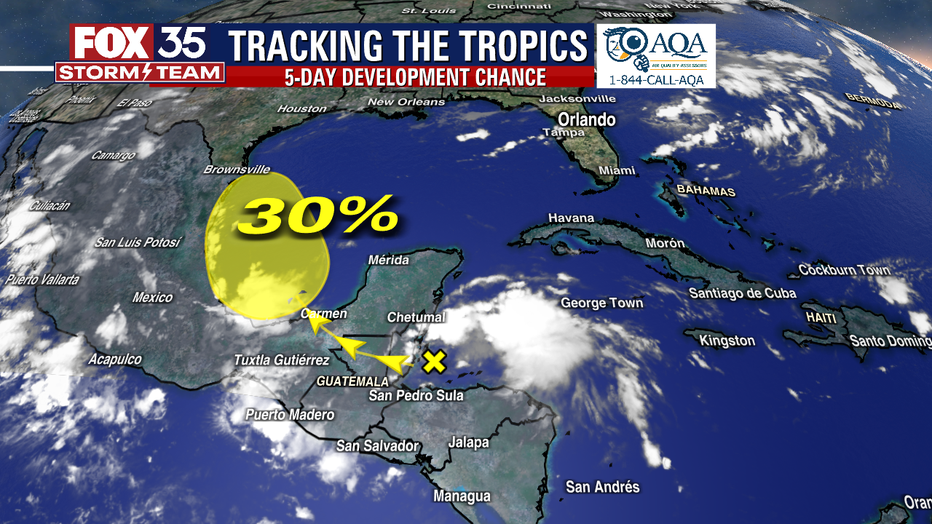