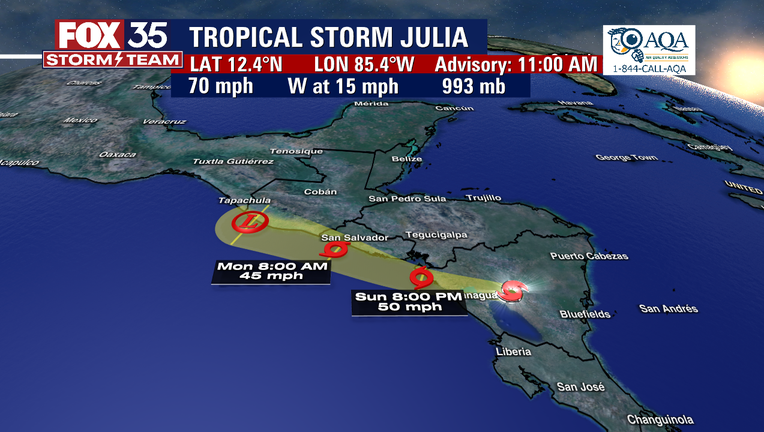 Hurricane Julia has been downgraded to a tropical storm after becoming a Category 1 storm and making landfall early Sunday morning over Nicaragua.

As of Sunday morning, Tropical Storm Julia is over Nicaragua and is quickly moving west towards the Pacific coastline. It is expected to remain a tropical storm as it moves over the country and retain its name before weakening to the south of El Salvador and Honduras on Monday. There remains no other threats in the tropics in the next five days.

So far, the 2022 Atlantic hurricane center has produced nine named storms: Alex, Bonnie, Colin, Danielle, Earl, Fiona, Gaston, Hermine, and Ian. The next two names on the list are Julia and Karl. October ranks as the third-most-active month (behind September and August) for tropical activity in the Atlantic Basin, typically producing about two named storms, one of which becomes a hurricane. And every other October, on average, one of those hurricanes intensifies into a "major hurricane," achieving Category 3 or higher intensity on the Saffir-Simpson Hurricane Wind Scale.