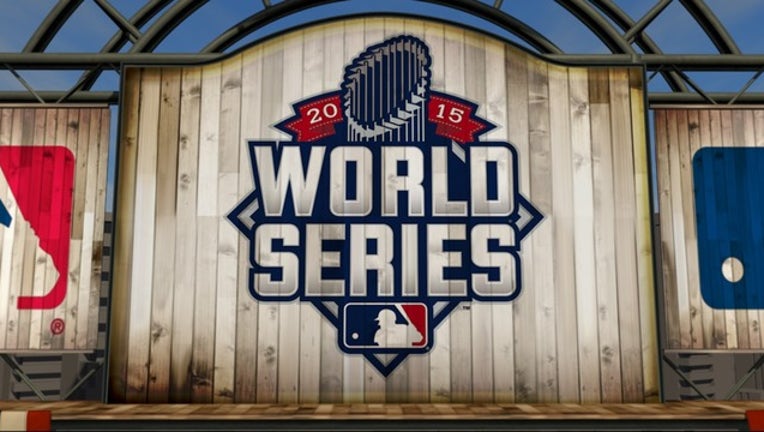 NEW YORK (AP) — Two balls launched over the wall, one fired over an opponent's head and just like that, David Wright and the New York Mets are right back in this World Series.

Wright homered and drove in four runs, Curtis Granderson also connected and rookie Noah Syndergaard set a nasty tone at the start of a 9-3 victory against the Kansas City Royals that trimmed New York's deficit to 2-1 Friday night.

Shut down at the plate in Kansas City, the Mets broke loose with 12 hits from nine different players as they chased Yordano Ventura early during the first Series game at Citi Field.

Pitching on Halloween eve, Syndergaard recovered from a scary start and went six innings, giving the Mets the winning performance they didn't get from fellow young starters Matt Harvey and Jacob deGrom at Kauffman Stadium.

Hometown rookie Steven Matz will try to pull New York even Saturday night in Game 4 when he faces 36-year-old Chris Young and the Royals.

After the Mets fell behind in the first inning, Granderson started the bottom half with a single and Wright hit his first World Series home run, recharging a packed crowd of 44,781 that included Jerry Seinfeld, Chris Rock and Dennis Miller.

The captain, who entered batting .182 without an RBI in his first World Series, added a two-run single on Kelvin Herrera's first pitch during a four-run sixth that broke it open. Pinch-hitter Juan Uribe, just back from a chest injury, had an RBI single in his first plate appearance since Sept. 25. Slumping slugger Yoenis Cespedes added a sacrifice fly.

Hoping to rekindle the comeback spirit of 1986, when the Mets rallied from an 0-2 World Series hole to beat Boston for their most recent championship, the team played its highlight video from that year on the large scoreboard during batting practice.

Well aware of Escobar's penchant for attacking the first pitch — the ALCS MVP opened Game 1 against New York with an inside-the-park homer — Syndergaard promised Thursday he had "a few tricks" up his sleeve for Escobar.

That turned out to be a 97 mph fastball fired just off the inside corner and way over Escobar's head, eliciting a huge cheer from fans. The skinny shortstop went down to the dirt on his rear end and stayed there, legs splayed, catching his breath for several seconds.

Kansas City players spent the next few innings shouting at Syndergaard from the dugout.

Escobar whiffed on a 99 mph heater, yet the Royals hardly looked intimidated as they scored three runs in the first two innings.

Ben Zobrist doubled and scored on a groundout by Eric Hosmer that gave him 16 RBIs in 14 postseason games this year. Alex Rios had an RBI single in the second, and another run scored on Travis d'Arnaud's passed ball.

But the Royals ran themselves out of a chance at a bigger inning when Alex Gordon was thrown out at third by rookie left fielder Michael Conforto, the safe call reversed following a replay review.

Syndergaard was a little shaky fielding his position but helped himself at the plate. He singled leading off the third ahead of Granderson's second homer of the Series, a line drive off Ventura into the front row of seats in the right-field corner.

That put the Mets ahead to stay at 4-3, making it the first World Series game with three lead changes in the first three innings, according to STATS.

WELCOME TO THE BIG SHOW

Raul A. Mondesi, added to Kansas City's roster Tuesday, became the first player to make his major league debut in the World Series. The 20-year-old son of 1994 NL Rookie of the Year Raul Mondesi pinch-hit in the fifth inning and struck out on four pitches.

New York's leadoff hitter has a Game 3 homer in four of the club's five trips to the World Series. Tommie Agee (1969), Wayne Garrett (1973) and Lenny Dykstra (1986) all went deep to start the game. Granderson waited until the third inning Friday — though the Mets did get a home run from their second batter of the night

Royals: Young won the opener in relief Tuesday, throwing 53 pitches and striking out four over three hitless innings. "My body feels fine," he said. "I'm not worried about bouncing back." The 6-foot-10 Princeton product, who has overcome a string of substantial injuries, went 5-9 in 24 starts for the Mets from 2011-12.

Mets: Matz made all of six major league starts during the regular season, and his World Series assignment is storybook stuff. The 24-year-old lefty from Long Island grew up a Mets fan about 50 miles from Citi Field. He planned to sleep at his parents' home Friday night and commute to the ballpark, just as he's done for much of his rookie season. "We're on off hours, so there's not much traffic. It's not too terrible," Matz said. "It's been pretty awesome to be able to do that."