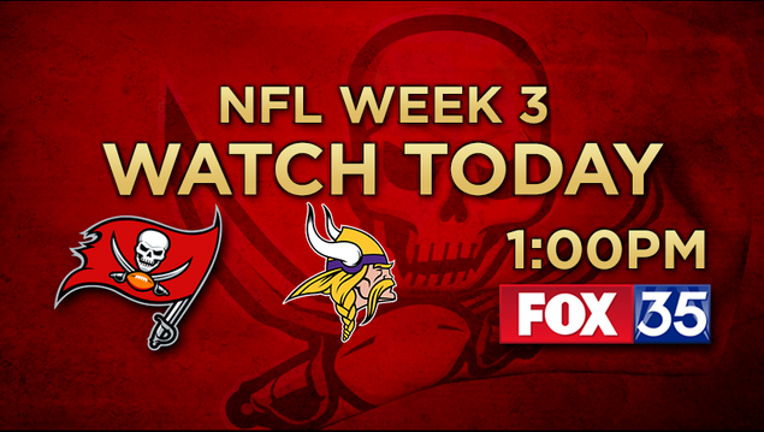 TAMPA, Fla. (AP) - Tampa Bay can't be sure who's playing quarterback for Minnesota this week, so the Buccaneers are preparing for Sam Bradford and Case Keenum.

They're also expecting a heavy dose of rookie running back Dalvin Cook, regardless of who's under center for the Vikings on Sunday.

"We consider him a game-wrecker," defensive coordinator Mike Smith said.

The second-round draft pick out of Florida State, a former college teammate of Jameis Winston who many felt would also wind up playing with the Bucs, leads the NFC with 191 yards rushing through two games.

"He likes to have the ball in his hand. You can tell that," Smith said. "As the year goes on, he is going to be a guy that they are probably going to feature more.

"We hope that this week it's not that he is featured. If he is, then (we hope) we are able to do what we are supposed to do."

With Bradford sitting out with a left knee injury, Cook still averaged more than 5 yards per attempt while being limited to 64 yards rushing in a lopsided loss to Pittsburgh last week.

Defensive tackle Gerald McCoy said Smith's description of Cook as a runner capable of taking over games is accurate.

"He is a game-wrecker - destroyed New Orleans and had some big runs last week," McCoy said. "He's not a 'run-and-get-out-of-bounds' guy. He's a 'get-that-extra-couple-yards' guy. Anybody like that, you've got to bring your big-boy pants with you.

"Even when they stretch the ball out, he looks for that hole and once he gets downhill he's getting downhill in a hurry. He's not getting downhill avoiding contact." McCoy added. "Not just that, but he can catch. He can wreck your game, just like coach said ... and we've got to be ready for him."

With Doug Martin set to miss the first three games of this season while serving the remainder of a four-game suspension for violating the NFL's policy of performance-enhancing drugs, running back was a priority entering the draft.

Bucs coach Dirk Koetter spent a considerable amount of time watching film and evaluating Cook, who may well have been Tampa Bay's choice in the first round if Alabama tight end O.J. Howard hadn't unexpectedly fallen to the Bucs at No. 19 overall.

Winston knows first-hand what type of player his former teammate was at Florida State, where they won a national title in 2014.

The young quarterback chuckled when he was asked if Tampa Bay's coaching staff has sought his advice on how to contain Cook.

Cook, who joined Darrin Nelson, D.J. Dozier and Michael Bennett as the only rookie running backs to start a Vikings season opener, said he was open to playing anywhere and isn't out to make the Bucs regret not drafting him.

"I just had an open mind about the whole situation," Cook said. "Tampa was one of the teams that needed a running back, but I was open-minded to everybody."

Winston, the first overall pick in the 2015 draft, said his friend doesn't need any extra motivation to succeed.

"I'm pretty sure, personally, he has a chip," the quarterback said. "But Dalvin runs like that, period. He's going to tote that rock. It doesn't matter if he got picked No. 1 or he got picked Mr. Irrelevant. He's a running back. He's a great guy, and he's an amazing player."