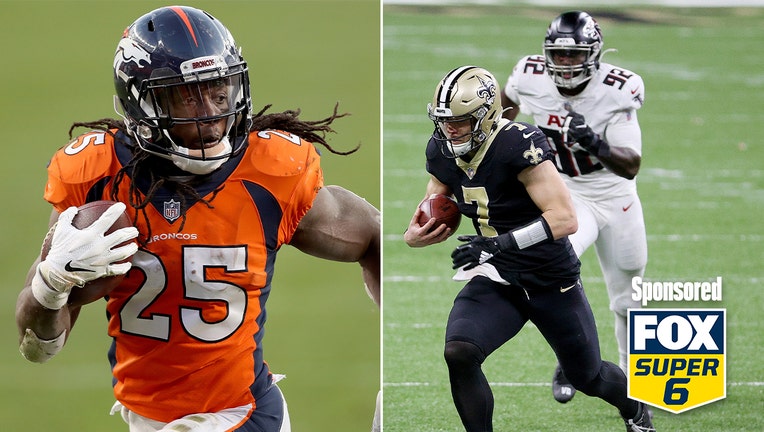 LEFT: Melvin Gordon #25 of the Denver Broncos carries the ball for a touchdown against the Miami Dolphins, to take a 20-10, during the third quarter at Empower Field At Mile High on November 22, 2020 in Denver, Colorado. (Photo by Matthew Stockman/Ge

As the NFL season starts the turn for home, you could win a whole lot of money for the holiday shopping season with FOX’s Super 6 contest.

This week, you could win the $100,000 jackpot if you could match the winners of all six games and the correct margins in the Super 6 contest. (The jackpot will be split among all those who get every game and margin of victory correct.)

The best part of all is it’s free. To play, all you have to do is go to the FOX Super 6 app on your phone or tablet device. When you click on the app, you will see the entry for the NFL Sunday Challenge. Just go onto the app, swipe for the team that you think will win and the margin of victory.

Here’s the six games to pick for this coming week.

Two teams that had reversals of fortune last Sunday. The Panthers finally snapped a five game losing streak with backup quarterback P.J. Walker under center, shutting out the Lions 20-0.  Teddy Bridgewater could return under center for the Panthers this week, but Carolina is likely to be without Christian McCaffrey for another week due to a shoulder injury. The Vikings playoff hopes were dealt a crushing blow when they lost at home to the Dallas Cowboys on Sunday, 31-28. One storyline to keep an eye on would be wide receiver Adam Theilen, who was placed on the COVID-19 reserve list on Monday.

A needed bounce back week for both teams. Arizona fell in a big NFC West showdown at Seattle last Thursday night, but Kyler Murray and the Cardinals are still in a good position to get in the mix in the NFC’s playoff mix. Meanwhile, this could be the last stand for the Patriots- who face an uphill climb behind Buffalo in the AFC East after falling in Houston last Sunday afternoon. New England has three straight road games (at the Chargers, at the Rams and at Miami) before finishing with games against the Bills and Jets. In other words, the Pats have no wiggle room left.

Who wins this matchup? With FOX Super 6, you could pick the winner of six NFL games and take a crack at big cash prizes. Download the app today.

Miami’s loss at Denver last Sunday was confusing in a lot of ways. For starters, the Dolphins offense floundered in the Mile High air, forcing Tua Tagovailoa to get yanked for backup Ryan Fitzpatrick, who had the Dolphins in a position to tie the game before throwing an interception in the end zone with under a minute to play. The Jets continue on the march to the No. 1 pick and a winless season.  It’s possible that Sam Darnold could be back at quarterback for New York for the first time since a shoulder injury.

Two teams trying to bounce back after disappointing losses last Sunday. The Raiders were competitive again and had the Chiefs on the ropes before falling 35-31 thanks to a Patrick Mahomes drive and touchdown pass to Travis Kelce in the final minute. Still, it was another great performance in a big spot for Derek Carr, who was 23-for-31 for 275 yards and three touchdowns and an interception. Meanwhile, Atlanta couldn’t keep the Saints defense from sacking Matt Ryan eight times last week in a 24-9 loss at New Orleans.

With FOX Super 6, you can bet and take a shot at great prizes. If you win all six games, you can win $100,000. Download the app at the App Store or Google Play.

Not all losing records are the same. The Giants are 3-7 and a half-game out of the NFC East lead with signs of life after back to back divisional wins over Washington and Philadelphia. Daniel Jones still continues to struggle at times, but he’s also taken better care of the football and that’s so critical to the Giants opportunity to make a playoff run. Meanwhile, Cincinnati saw its brightest spot this season fizzle last week when Joe Burrow was lost for the season with multiple knee injuries during a 20-9 loss in Washington. Ryan Finley will start for the Bengals on Sunday.

The Taysom Hill experiment got off to a great start on Sunday with some help from the New Orleans defense, who complied eight sacks in a 24-9 win over the Falcons. Hill threw for 233 yards while Michael Thomas had 104 yards receiving. New Orleans has won seven in a row since back to back losses to the Raiders and Packers. Denver frustrated the Dolphins in a 20-13 win at home. Melvin Gordon III had two touchdowns and 84 yards rushing for Denver, who is trying to get more out of Drew Lock at quarterback.

With the FOX Super 6, you can bet this game and take a chance at $500,000 if you can pick all six games right. Download the free app today.