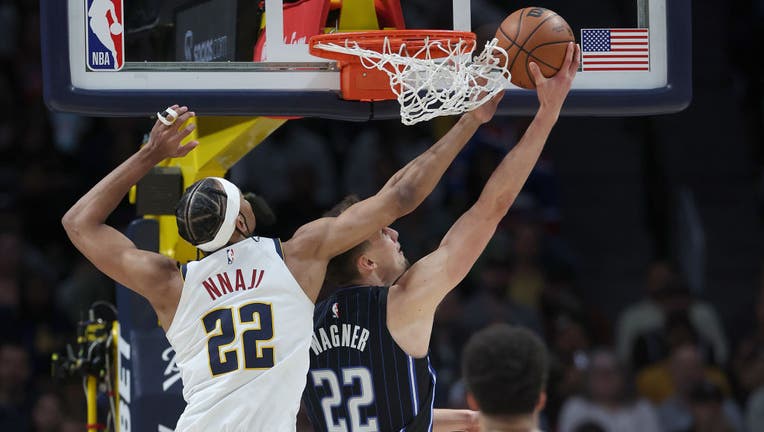 DENVER, COLORADO - JANUARY 15: Franz Wagner #22 of the Orlando Magic goes to the basket against Zeke Nnaji #22 of the Denver Nuggets in the third quarter at Ball Arena on January 15, 2023 in Denver, Colorado. NOTE TO USER: User expressly acknowledges

CJ McCollum led New Orleans with 23 points. Jonas Valanciunas had 20 points and 10 rebounds, and Trey Murphy III added 18 points for the injury-riddled Pelicans, who lost for the eighth time in 11 games.

A three-point play by Jalen Suggs with 9:17 remaining broke a 95-all tie and launched a 12-2 run that put Orlando ahead for good. Bol Bol, who finished with 12 points and five rebounds, followed with a tricky drive through the lane that he finished with a dunk.

Wagner had 21 points and six assists in the first half.

After falling behind by 14 early, the Magic made their first six shots of the second quarter, including 3-pointers by Wagner, Mo Bamba and Anthony, to get back in it.

Herbert Jones, who started for New Orleans after missing the previous four games with a lower back bruise, scored the Pelicans’ final five points of the half, leaving them with a 60-56 lead.

Magic: F Jonathan Isaac was recalled from the G League after playing three games with the Lakeland Magic, but was not activated. Isaac has not played in an NBA game since tearing his left ACL in August 2020. There are no specific plans for activating him.

Pelicans: Play at Miami on Sunday.