PANAMA CITY, Panama - Anibal Godoy scored in the 54th minute and Panama upended the United States 1-0 in a World Cup qualifier Sunday night when American coach Gregg Berhalter started a largely second-string lineup in the middle of another hectic stretch of three matches in seven days.

Christian Pulisic, Gio Reyna and Weston McKennie were out with injuries, Tyler Adams and Brenden Aaronson were on the bench, and Antonee Robinson didn’t travel because of British COVID-19 restrictions that would have required a quarantine on his return to England.

With the U.S. lineup far from its best, the Americans looked both nervous and overamped for stretches of the first half. 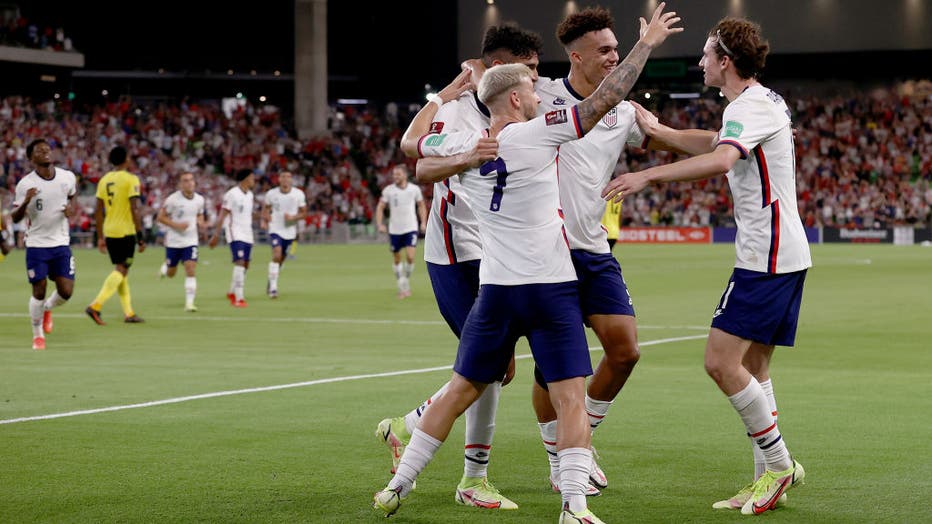 Ricardo Pepi, No. 16 of the United States, celebrates with Paul Arriola, No. 7, and Antonee Robinson, No. 5, after scoring against Jamaica in the second half of a 2022 World Cup Qualifying match at Q2 Stadium on Oct. 7, 2021, in Austin, Texas. (Photo

Adams entered at the start of the second half and gave away a corner kick that led to the goal on a ball he may have been able to clear. Éric Davis’ corner was headed by the 31-year-old Godoy past goalkeeper Matt Turner and inside the far post, causing a crowd about three-quarters full to shake Estadio Rommel Fernández.

"We’re going to look back at this and be frustrated," Turner said. "Physically the intensity wasn’t there. They got a huge boost from their home crowd and we didn’t match and exceed that."

Aaronson gave the U.S. more energy and pace, and Ricardo Pepi, DeAndre Yedlin and Christian Roldan entered in the 67th. During the final hectic minutes, the game was interrupted twice when fans ran onto the field, and a ball was thrown from the stands. The ball boys didnt’ help, occasionally throwing multiple balls onto the pitch after one went out of bounds.

The Americans began the night atop the eight-nation final round of North and Central America and the Carribean, on goal difference over Mexico.

The U.S. has eight points after five of 14 games, ahead of Panama on goal difference, heading into Wednesday night’s match against Costa Rica at Columbus, Ohio. Mexico played Honduras, and Canada has seven points after a scoreless draw with Jamaica. Costa Rica beat El Salvador 2-1.

The top three nations qualify, and the No. 4 team advances to a playoff.

The defeat ended a 13-game unbeaten streak for the Americans that included 11 wins. It was their first ever loss to Panama in a qualifier.

The match was played on the fourth anniversary of the 2-1 loss at Trinidad that ended a streak of seven World Cup appearances for the U.S., a defeat that enabled Panama to reach the World Cup for the first time.

The U.S. once again went on the road to an antiquated stadium, allowed because FIFA and CONCACAF refuse responsibility for mandating standards anything close to what leading European and American clubs maintain.

Panama used the same starting lineup in its first three qualifiers and nine of the 11 who began Thursday’s 1-0 loss at El Salvador.

Panama nearly went ahead in the 14th minute when Freddy Góndola crossed to an open Rolando Blackburn, who couldn’t get his foot on the ball in front of the net.

Davis’ corner kick was deflected past the far post in the 27th minute. Turner palmed a cross over the crossbar in the 28th, and in the 34th he jutted out his right arm to deflect Góndola’s point-blank shot after Acosta’s giveaway only for Panama to be whistled for offside. Turner tipped Édgar Bárcenas’ shot over the bar in the 45th.

"In the first half it was probably a little bit of lack of energy and competitiveness," Adams said. "We have to do better."

Notes: CBS owned U.S. English-language video rights and chose not to broadcast the match and to stream it only. NBCUniversal televised the match in Spanish on Universo.