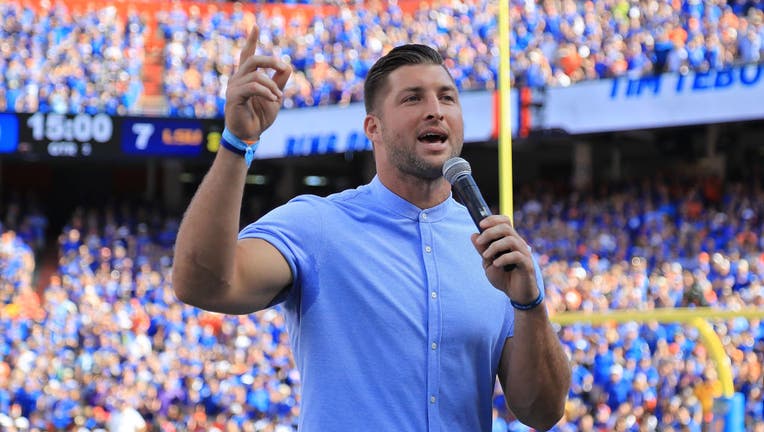 Tim Tebow is inducted into the Ring of Honor during the game between the Florida Gators and the LSU Tigersat Ben Hill Griffin Stadium on October 6, 2018 in Gainesville, Florida. (Photo by Sam Greenwood/Getty Images)

Tim Tebow, who led Florida to two national championships and won the 2007 Heisman Trophy, is among the former players making a first appearance on the College Football Hall of Fame ballot.

The National Football Foundation announced on Monday the players and coaches eligible for election into the Hall of Fame, and 11 of the 80 FBS players are debuting on the ballot.

Hall of Fame ballots go to more than 12,000 NFF members and current Hall of Famers. The votes are considered by the NFF’s Honors Courts, which then deliberates and selects a class of about a dozen players and two or three coaches.

College Football Hall of Famer and two-time Heisman Trophy winner Archie Griffin from Ohio State is the chairman of the Honors Court, which includes athletic administrators, Hall of Famers and members of the media from all over the country.

Some of the other former players on the ballot for the first time are quarterback Alex Smith of Utah, wide receiver Justin Blackmon of Oklahoma State, running back Ki-Jana Carter of Penn State, linebacker Luke Kuechly of Boston College and defensive lineman Dewey Selmon of Oklahoma.

Tebow was the first sophomore to win the Heisman Trophy, and he was a three-time SEC offensive player of the year who set 28 school records during his career from 2006-09.

Chris Leak beat out Tebow for Florida’s starting quarterback job in 2006, but coach Urban Meyer inserted Tebow in goal-line situations where he could use his 6-foot-3, 245-pound frame as a runner. Tebow’s role expanded, and he threw for a touchdown and rushed for another in the BCS title game against Ohio State.

During his 2007 Heisman season, he became the first FBS quarterback to throw for 20 touchdowns and run for 20 TDs in the same season, and his 55 combined TDs were most in SEC history.

The Gators won the 2008 title with Tebow leading them past Oklahoma in the championship game, and he guided Florida to a second straight 13-1 record in 2009.

Tebow has been outspoken about his Christian beliefs. His propensity to take a knee in prayer on the field became widely known as "Tebowing." He often wore eye black that referenced Bible verses.

Pro football analysts debated how Tebow would transition into the NFL. The Denver Broncos drafted him in the first round in 2010 but he was mostly a backup in three seasons, his last with the New York Jets. He later played minor-league baseball in the New York Mets organization.

Among coaches on the ballot for the first time are Mark Richt, Larry Coker and Frank Solich.

Solich succeeded Tom Osborne in 1998 and led the Cornhuskers to the 2001 national title game. He was fired in 2003 despite going 58-19. He became the winningest coach in Mid-American Conference history at Ohio before retiring last summer.