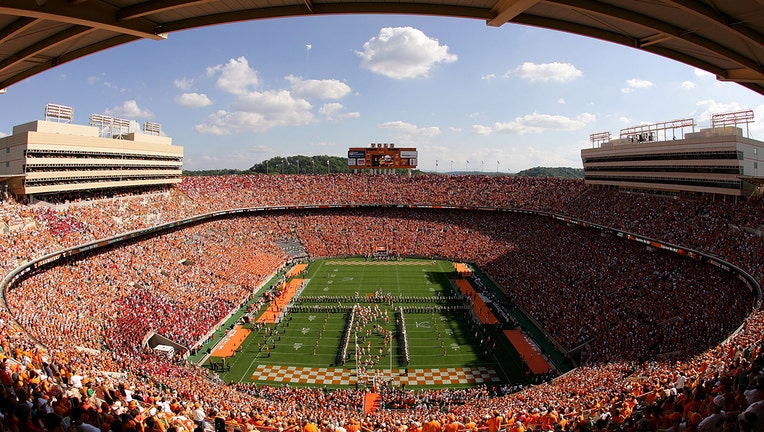 KNOXVILLE, TN - OCTOBER 06: A general view of the Tennessee Volunteers taking the field before the start of their game against the Georgia Bulldogs at Neyland Stadium on October 6, 2007 in Knoxville, Tennessee. (Photo by Streeter Lecka/Getty Images)

KNOXVILLE, Tenn. (AP) - Tennessee has unveiled updated plans for a Neyland Stadium renovation as the facility approaches its 100-year anniversary.

Athletic director Phillip Fulmer had announced in November 2018 that the start of the renovation was being delayed to review all aspects of the plan. Fulmer discussed the new plan Friday at a Board of Trustees meeting.

Tennessee's Board of Trustees had approved a $180 million first phase of renovation in November 2017 when John Currie was athletic director. School officials said Friday that the updated plan meets the requirements from the previous Board of Trustees approval, and that the project wouldn't require any state funds or subsidies.

Neyland Stadium, which currently has a seating capacity of 102,455, already added a 360-degree ribbon board this year. The new renovation plan calls for the stadium's sound system to be replaced and upgraded before the 2020 football season.

Changes for the stadium's centennial season in 2021 include renovating the Lauricella Center for letter winners and moving the press box from the west side to the east side. An open-air donor lounge would replace the current media facilities on the west side.

Planners hope to complete south course renovations, add a video board to the north side of the stadium and rebuild the lower west-side seating deck by the fall of 2022.

The project calls for adding plazas for fan engagement and a gathering space with food and beverage service in 2023.

Also at the Board of Trustees meeting, Tennessee athletic officials said they estimated a budget surplus of $711,729 for the 2018-19 fiscal year. Official budget figures for that year won't be released until January.

Tennessee had reported a deficit of nearly $6.5 million for the fiscal year that ended on June 30, 2018, thanks partly to hefty buyouts for former football coach Butch Jones and his staff as well as Currie.