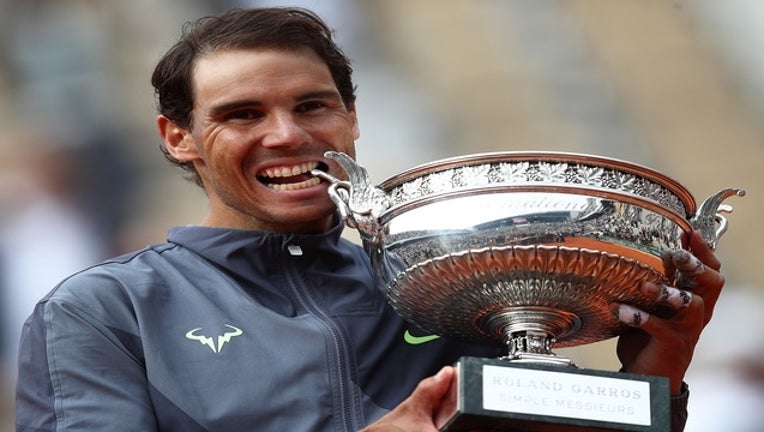 PARIS, FRANCE - JUNE 09: Rafael Nadal of Spain bites the trophy after defeating Dominic Thiem of Austria in the final during Day Fifteen of the 2019 French Open at Roland Garros on June 09, 2019 in Paris, France. (Photo by Julian Finney/Getty Images)

PARIS (AP) - It all took a toll on Dominic Thiem, both physically and mentally, and that left him in no condition to do what it would take to beat Rafael Nadal in the French Open final.

Just to earn the right to face Nadal for the title at Roland Garros for the second year in a row Sunday, Thiem needed to end No. 1 Novak Djokovic's 26-match Grand Slam winning streak. That took five sets over 4 hours, 13 minutes spread over two rain-interrupted days.

Then, less than 24 hours after that one concluded, Thiem needed to step on court for the fourth consecutive day to try to deal with Nadal and everything that entails. For the final's opening two sets, Thiem was able to hang with the man known as the King of Clay. And then?

"I had a little drop, which is, against most of the players, not that bad," Thiem said, "but he took the chance and stepped right on me."

Nadal reeled off 16 of the initial 17 points in the third set on the way to taking 12 of the last 14 games in a 6-3, 5-7, 6-1, 6-1 victory over Thiem. That gave Nadal his 12th French Open title and 18th Grand Slam trophy overall, while denying Thiem what would have been his first major championship.

There was no doubt for Thiem what played a role.

After all, he was trying to do something only three men have in the professional era, which began in 1968: beat the No. 1 and No. 2 seeds at Roland Garros.

"Beating Novak over two days, with all the interruption," said Thiem, a 25-year-old Austrian who was seeded No. 4, "it leaves traces on the body and also on the mind."

That, especially, is not an ideal way to face Nadal on the red clay of Paris, where the guy has won 93 of 95 career matches.

Still, Thiem gave it a go over the first 100 minutes, hanging with Nadal on exciting exchanges from the baseline that seemingly wouldn't end, just because both men are so adept at covering the court so well. By match's end, there were 46 points that lasted at least 10 strokes, and Nadal and Thiem both won 23.

Only one of them was able to sustain the high level of focus and stamina for the third and fourth sets, though.

"Maybe," acknowledged Thiem's physical trainer, Alex Stober, "he was running out of fuel a little at the end."

During the trophy ceremony, Nadal repeatedly praised his opponent, saying that he expects -- and hopes -- that Thiem will one day hoist aloft that silver symbol of excellence.

So, too, of course, does Thiem himself.

He kept talking about next year.

"I'm on the right way. And I failed today, but my goal and my dream is still to win this tournament or to win a Grand Slam tournament. I will try my best next year again," Thiem said. "I gave everything I had in these two weeks."