Round one of the Arnold Palmer Invitational is now in the books and a fan favorite is on top.

ORLANDO, Fla. (AP) - Rory McIlroy opened with a 7-under 65 on Thursday and had reason to expect a score like this at Bay Hill, not so much because of the course but rather the day of the week.

Good starts have not been a problem for McIlroy at the Arnold Palmer Invitational the last two years. Now it’s about keeping them going to the finish line.

With three birdies and a 40-foot eagle on the par 5s, McIlroy had his lowest start at Bay Hill and a two-shot lead over Billy Horschel, Beau Hossler and J.J. Spaun.

Adam Scott, Graeme McDowell and Ian Poulter, who dressed in Ukrainian colors, were in the group three shots behind at 68.

"I think you turn up at any golf course where you’ve had success, and automatically you’re going to have some confidence coming in," said McIlroy, who won at Bay Hill in 2018 and hasn’t finished out of the top 10 the last five years.

He opened with a 66 each of the last two years, both times failing to break par on the weekend.

But there is a rhythm to playing Bay Hill that makes McIlroy comfortable, mainly taking advantage of the par 5s and some of the shorter par 4s. He had eagle putts on three of the par 5s, making the long one up the ridge on the 16th, his seventh hole of the round.

"I played the par 5s particularly well, and that was the bulk of the score," he said. "I’ve said this all along, you can play within yourself here and still shoot a good score, I feel, if you’re just disciplined and pick off the birdies where you’re supposed to." 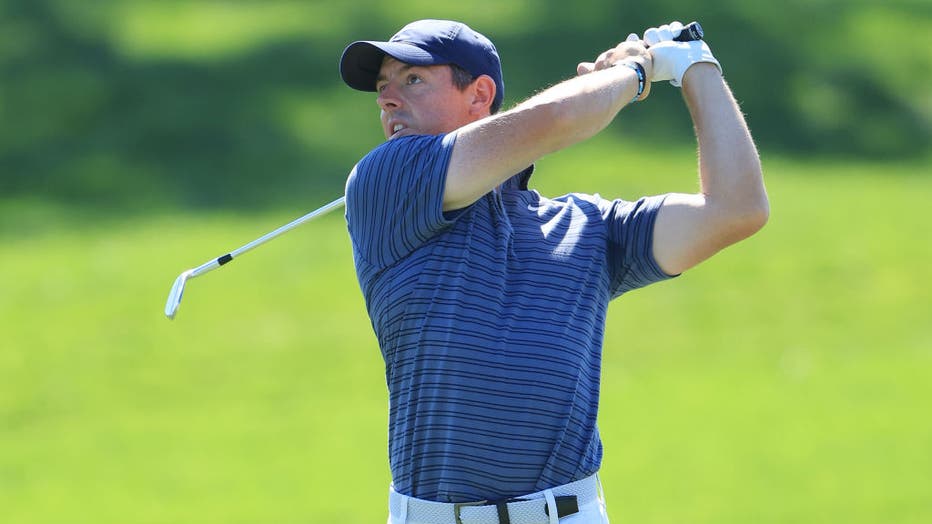 ORLANDO, FLORIDA - MARCH 03: Rory McIlroy of Northern Ireland plays a shot on the 18th hole during the first round of the Arnold Palmer Invitational presented by Mastercard at Arnold Palmer Bay Hill Golf Course on March 03, 2022 in Orlando, Florida.

Jon Rahm, the world’s No. 1 player, made his Bay Hill debut with a 72 that included one extra stroke he didn’t anticipate. He went to rap in a 10-inch par putt on the seventh hole, didn’t feel right and tried to stop the stroke only for it to nudge the ball an inch.

"I wish I could give you all the excuses in the world, but no, it’s as simple as it just didn’t feel good in my hands, and I tried to stop, and I didn’t. I just simply didn’t stop," Rahm said. "I don’t know. It was very odd."

McIlroy played alongside Scott, a delight for the largest gallery of the morning who enjoy watching two pure swings with the driver. There was an exception this time. Scott decided to leave driver out of the bag in an attempt to hit more fairways and avoid rough that is thicker than usual.

How did it work out?

As for his accuracy, he hit only seven of the 14 fairways. Asked if he would go without a driver at the TPC Sawgrass next week, Scott wasn’t even sure what he would do Friday.

It still was a comfortable start, especially playing with McIlroy and seeing the four-time major champion make it look easy on a course that held its own in ideal weather.

"I like playing with Rory. I really enjoy watching him play," Scott said. "He’s a guy I can watch play and get positive swing thoughts for myself. I love watching him swing a golf club. I think almost everyone in the world would say that."

McIlroy already has one win this season on the PGA Tour, at the CJ Cup in Las Vegas last fall, though he let one opportunity slip this year when he had the lead on the back nine in Dubai until a series of bogeys cost him.

His lone victory at Bay Hill was a 67-64 finish, so he does know how to close.

McDowell has a pair of runner-up finishes in the Arnold Palmer Invitational and now is one of the biggest supporters of the lone PGA Tour event in his adopted hometown. He is trying to get his game pointed in the right direction and feels it is trending.

His last win on the PGA Tour was in the Dominican Republic in 2019. His victory in the Saudi International a year later got him back into the top 50 in the world and earned him another spot in the Masters. Since that Saudi win, McDowell has only one top 10 and is at No. 399.

It’s enough to keep him from even contemplating a bid to become Europe’s next Ryder Cup captain. McDowell feels as though the 2023 matches in Italy — Europe still hasn’t announced a captain — might be his only chance.

"I desperately want to get back playing consistently well at a high level again rather than maybe taking my attention away and taking the Ryder Cup captaincy," he said. "Maybe part of me would be suggesting that I’m not good enough to make the team. Are there 12 better players than me in Europe right now? I’ve got to ask myself that question.

"If I’m out here doing what I’m doing, I have to say there’s not 12 guys better than me, and I’m good enough to make the team," he said. "To be able to compete at a high level, I have to have that belief."