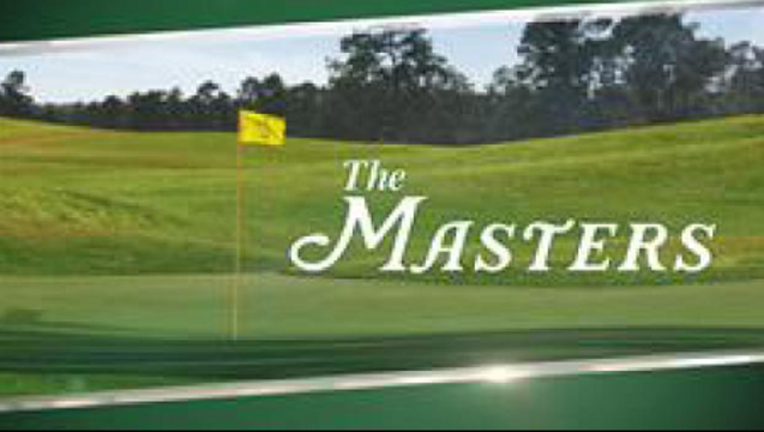 Reed shot a 6-under 66 in the second round Friday, moving to 9 under for the tournament and giving him a two-shot lead over Marc Leishman heading into the third round. Reed and Leishman will be the final pairing Saturday, with the weather forecast calling for steady rain throughout the day. Both Reed and Leishman are seeking their first major title.

The 27-year-old Texan says "I just kept myself out of trouble and let my putter do the work."

Reed grabbed the lead thanks mostly to becoming the only player in the field to birdie all eight par 5s in the first two rounds. He also putted just 51 times through 36 holes.

Reed became the first to reach double digits under par this year -- albeit it a brief stay. Reed made three consecutive birdies on the back nine before making a bogey at the par-3 16th and slipping a bit.

Tiger Woods is going to make the cut at his first Masters in three years.

Woods shot a three-over 75 in the second round and was 4 over heading into the weekend. The 75 matched his second-worst score at the Masters.

Woods struggled with distance control Friday in difficult conditions and lamented a number of close misses on greens.

Woods says, "I didn't hit my irons very good at all. So many beautiful putts but nothing went in today. Didn't control distances, shapes or anything."

Still, Woods was mostly pleased with how he's played in his first major since the 2015 PGA Championship.

He says, "six months ago, I didn't know if I was going to play again. It's incredible. Just so thankful have this opportunity to be able to play golf again."

Woods says he needs a "special weekend" and some help to get back in contention.

Patrick Reed is the first to reach double digits under par at the Masters this year -- albeit it a brief stay.

Reed made three consecutive birdies on the back nine in the second round to get to 10 under. He was three shots ahead of Marc Leishman before making a bogey at the par-3 16th and slipping to 9 under.

Given the way Reed has played -- he also made three straight birdies on the front side -- it seems like only a matter of time before he gets back to double digits.

Reed is the only player in the field to make a birdie at all eight par 5s in the first two rounds.

Tiger Woods finally has a birdie on a par 5 at this Masters. The way his second round has gone, he's thrilled to have a birdie anywhere.

Woods has overpowered the par 5s at Augusta National while winning four times. He made par on all four of them in the opening round, and failed to convert on the par 5s on the front nine Friday. But he blasted an iron out of pine straw and onto the green at the par-5 13th and two-putted for birdie. That pulled him to within 11 shots of Patrick Reed.

His first birdie of the round at No. 13 followed another tee shot into Rae's Creek on the par-3 12th. Woods was 4 over with five holes to play.

Patrick Reed made three consecutive birdies take a three-shot lead at the Masters.

Reed made birdies at Nos. 7, 8 and 9 in the second round Friday, getting to 8 under at the turn in tough conditions. He moved three shots ahead of playing partner Charley Hoffman and Marc Leishman.

He gave a stroke back at No. 10, barely missing a 7-footer for par.

The 27-year-old Texan is looking for his first major. He finished second at the PGA Championship last year.

World No. 1 Dustin Johnson had one of the best par saves of the day.

Playing the par-3 16th in the second round Friday, Johnson landed just off the back of the green. His second shot, with his putter, rolled more 45 feet past the hole and set up a long, uphill putt that he turned into an improbable par.

It helped Johnson finish the day 3 under and four shots behind Patrick Reed.

One of the biggest hitters on the PGA Tour, Johnson feasted on the par 5s Friday. He made an eagle at No. 2 and birdies at Nos. 8 and 13.

His shot was by no way the only highlight of the day.

Another memorable shot was Russell Henley's 82-footer for eagle on No. 15.

Tiger Woods was hoping to make a move at the Masters -- in the other direction.

Instead, Woods faltered early and fell as many as 10 shot behind the leader in the second round.

The 42-year-old Woods made a bogey at the par-4 first and a double at the par-5 fifth. He also failed for the fifth time in as many tries in two days to make a birdie at a par 5.

His second shot at the opening hole landed left of the green and then he left the tricky chip shot on the fringe. He tried a 6-footer from there, but came up just short and ended up with a tap-in bogey.

His adventures at No. 5 were even wilder. Woods pushed his tee shot way right into the pine trees. His second shot sailed over the green and into heavy brush. He had to take an unplayable lie, but left his fourth shot through the trees in a bunker. He got up and down from the sand for a 6.

But he was left with the daunting task of making up ground on a course that is becoming harder, faster and tougher by the hour.

Fred Couples is likely going to make the cut at the Masters for the 30th time, which would tie Gary Player for the second most in tournament history.

Couples, the 1992 Masters champion, shot a 2-over 74 in the second round Friday. He rallied after a tough stretch on the back nine, making three birdies in four holes to get back to even. He limped home with bogeys on two of the final three holes.

Still, it ended up being a solid day for the golfer nicknamed "Boom Boom."

The projected cutline is 5 over, making Couples' weekend stay almost a certainty.

Couples and Player hold the record of consecutive cuts made (23) at the Masters. Couples made every cut from 1982 through 2007.

On a day when the wind has picked up and scores are rising, Matt Kuchar is holding a share of the lead at the Masters.

Seeking his first major title, Kuchar made the turn with a 1-over score in the second round to remain at 3 under for the day. He is tied with Austria's Bernd Wiesberger and Spain's Rafael Cabrera-Bello, along with four other players who had late tee times: Henrik Stenson of Sweden, Canada's Adam Hadwin and Americans Patrick Reed and Charley Hoffman.

First-round leader Jordan Spieth is struggling. He got off to a terrible start, making a double bogey at the first hole and a bogey at the second, before dropping another shot with a bogey at No. 7. He is now part of the group at 2 under, which also includes Rickie Fowler and Rory McIlroy.

Phil Mickelson was also in the mix until a triple-bogey 7 at the ninth dropped him to 1 over.

Tiger Woods is just teeing off in one of the final groups of the day. He opened with a 73 and is now just four shots off the lead.

Fred Couples dropped four shots in two holes to start the back nine at Augusta National on Friday, ruining what was otherwise a solid second round at the Masters.

He bounced back with a birdie at No. 12 to get to 2 over for the tournament.

He was looking good for much of the round before struggling during a two-hole stretch.

Couples pulled his approach shot left of the green at the par-4 10th and followed that with a not-so-stellar chip. He missed an 18-footer from the fringe for par.

The 58-year-old Couples, the 1992 Masters champion, really struggled at the start of Amen Corner.

His tee shot at No. 11 rattled between some pine trees left. He pushed his second shot way right, about three rows deep into the galley, and then chipped through the green and into the water. He dropped from there, chipped to 12 feet, missed that and settled for a triple bogey. It was his first triple of the tournament.

Matt Kuchar, Jordan Spieth and five others remain in a seven-way tie for the lead at 3 under.

Jordan Spieth is missing fairways and struggling with his putter.

Spieth opened the second round of the Masters with a double-bogey and a bogey, squandering a two-shot lead. Spieth pushed his first drive way right and pulled his next one well left.

Spieth also missed putts of 11 and 5 feet. And that's after needing just 10 putts on the back nine Thursday.

Spieth went from 6 under to 3 under through two holes Friday.

He is now in a seven-way tie for the lead at 3 under.

Jordan Spieth is off to a shaky start in the second round at the Masters.

Spieth double-bogeyed the first hole to drop to 4 under in the 72-hole tournament.

Spieth pushed his tee shot at the par-4 No. 1 way right. He failed to get his second shot back to the fairway and then left his third one short of the green. He missed an 11-footer for bogey. It was a frustrating start for the 2015 Masters champion and opened the door for everyone else on the leaderboard.

Spieth birdied five straight holes down the stretch in the opening round and finished with a 6-under 66. He bogeyed the par-4 18th.

First-round leader and 2015 Masters champion Jordan Spieth is back on the course at golf's first major.

Spieth took a two-stroke lead to the first tee at Augusta National on Friday. Spieth is playing with Alex Noren and Louis Oosthuizen for the second straight day.

Webb Simpson could be making a move with consecutive birdies at the second and third holes. He is now 2 over after shooting a 76 in the opening round.

Li Haotong has begun his second round at the Masters.

The 22-year-old from China opened the day three shots off the lead after finishing with a 69 on the first day of the tournament. For close to an hour, his name was atop those white leaderboards around Augusta National with Tony Finau until Jordan Spieth took over.

Li qualified for the Masters by closing with a 63 at Royal Birkdale in the British Open last summer. Earlier this year, he rallied to beat Rory McIlroy in a duel at the Dubai Desert Classic that allowed him to crack the top 50 in the world for the first time.

Rory McIlroy heads into the second round of the Masters with the career Grand Slam still in sight.

McIlroy saved par on the final three holes in the opening round Thursday and finished with a 3-under 69. He broke 70 in the first round at Augusta National for the first time since 2011. He shot a 65 that year and looked like he would win a green jacket before a final-round meltdown.

McIlroy is three shots behind Jordan Spieth, who made five consecutive birdies on the back nine to build a two-stroke lead over Tony Finau and Matt Kuchar.

"You look at it and not anyone is really getting away," McIlroy said. "Jordan had a pretty strong finish there. But this is my best start in a few years. And, yeah, it's such a hard golf course to play catch-up on. If you start to chase it around here, that's when you start to make mistakes.

"But to be right up there and have the ability to stay patient because of the position I'm in, that's a nice luxury I have over the next few days."