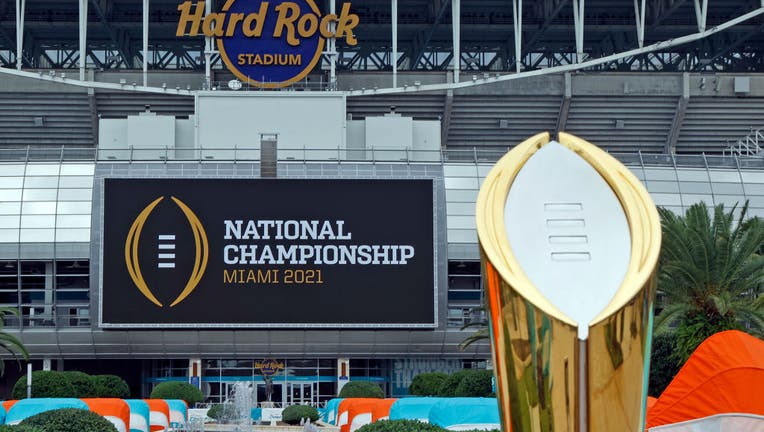 Alabama was No. 1 in the first College Football Playoff rankings of the season Tuesday night, followed by Notre Dame, Clemson and Ohio State.

Texas A&M was fifth and Florida sixth, giving the Southeastern Conference three of the top six teams. Alabama is No. 1 in the CFP rankings for a record 19th time.

Unbeaten Cincinnati from the American Athletic Conference at seventh has the best ranking for a non-Power Five team in the seven-year history of the selection committee’s top 25.

No. 8 Northwestern, Georgia and Miami rounded out the top 10.

Another unbeaten team from outside the Power Five was not so highly regarded by the committee. BYU was slotted 14th, behind No. 11 Oklahoma (6-2) and No. 13 Iowa State (6-2), among others. The Cougars were No. 8 in the latest AP Top 25.

The highest-ranked Pac-12 team was Oregon at 15th. Southern California was 18th.

Much like this entire college football season played in a pandemic, the rankings schedule has been delayed and truncated this year.

The 13-person selection committee usually starts ranking teams around Halloween and produces six rankings before the final ones that determine which 12 teams will play in the semifinals and major bowl games.

This is the first of four reveals leading up to the only ones that really count, scheduled to be released on Dec. 20.

The coronavirus pandemic didn’t stop the selection committee from meeting in person as usual at the Gaylord Hotel in Grapevine, Texas, just outside Dallas. And the playoff itself is scheduled to go off as scheduled with the semifinals on Jan. 1 in the Rose Bowl and Sugar Bowl, and the championship game Jan. 11 at Hard Rock Stadium in Miami Gardens, Florida.

Because of the strange season, these initial committee rankings had more intrigue than normal and several questions to answer.

Q: How did the committee treat the non-Power Five unbeatens?

Cincinnati (8-0) should be thrilled. BYU (9-0), not so much. Even though the Cougars lead the FBS in scoring margin at 33 points per game.

Barta said the Cougars' schedule, which had to be rebuilt because Power Five conferences mostly decided to play only league games due to the pandemic, wasn't tough enough to warrant a better ranking.

“Right now BYU’s best win is over Boise State, and in that game I think (the Broncos) got down to their third-string quarterback,” Barta said.

No non-Power Five team had ever ranked better than 12th in the first rankings. The best ranking in any selection committee top 25 by a team from outside the Power Five had been No. 8 for unbeaten UCF in the final 2018 rankings.

At worst, Cincinnati is lined up nicely to win out and grab the spot guaranteed to the top Group of Five conference champion in the New Year's six bowls.

The contenders for that spot if Cincinnati collapses down the stretch are Coastal Carolina from the Sun Belt at 20, Marshall from Conference USA at 21 and the Bearcats' AAC rival Tulsa at 25.

BYU is not only outside the realistic playoff race, but the Cougars would still need to rise a few spots to have a shot at getting an at-large invite to one of the lucrative New Year's Six games.

“Great motivation for our guys,” BYU coach Kalani Sitake said on ESPN while mostly taking the high road about the rankings.

A bid to the Fiesta, Cotton or Peach bowls would be worth $4 million to the independent Cougars, who are not eligible for the spot reserved for the Group of Five.

BYU has only a game against San Diego State on Dec. 12 left on its schedule, but is looking to add opponents. There were some discussions in the last few days with Washington, which had its game this weekend against Washington State called off, but it didn't work.

"We’re not afraid of anybody,” Sitake said.

Well, how about Cincinnati? The Cougars and Bearcats are both off Dec. 5.

It always comes down to risk/reward. The Cougars could certainly use a boost. The Bearcats still have Temple this week and likely two games with Tulsa.

Would that be enough for the Bearcats to move into playoff position if some of the teams in front of them are cleared out? BYU would definitely give that resume a lift.

Q: How much emphasis was put on number data points aka games played?

Some, clearly by looking at unbeaten Ohio State (4-0) sitting behind Clemson (7-1) and the Pac-12 teams being way back. But then again, Wisconsin (2-1) at 16th suggests maybe not enough.

Q: How much did head-to-head matter?

In the case of Texas A&M and Florida, a lot. The Aggies beat the Gators and are ahead of them.

In the case of Oklahoma and Iowa State, not so much. The Cyclones beat the Sooners last month, but Oklahoma has been on a roll recently and is ranked ahead of Iowa State.

Notably, Louisiana-Lafayette from the Sun Belt won at Iowa State to open the season and has just one loss, to Coastal Carolina. And the Ragin' Cajuns are unranked.

The conference is not going to do better than a two-loss champion that will need a lot of help to reach the top four, but the rankings suggest the Big 12 is not quite out of this thing. Especially if Oklahoma keeps up its recent rampage.

Follow Ralph D. Russo at https://twitter.com/ralphDrussoAP and listen at https://westwoodonepodcasts.com/pods/ap-top-25-college-football-podcast/