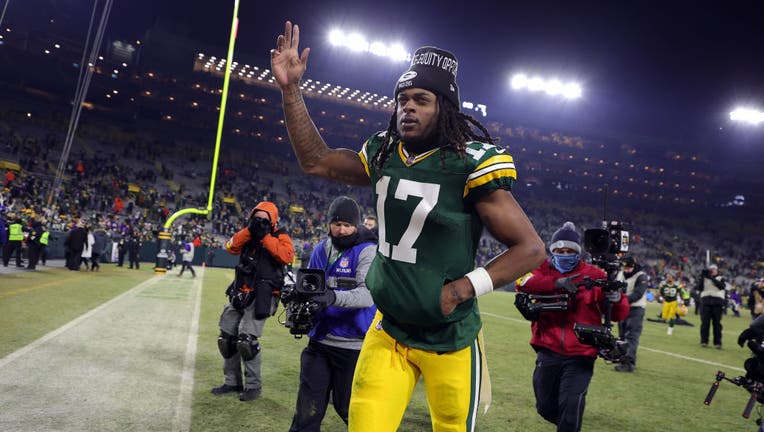 GREEN BAY, WISCONSIN - JANUARY 02: Wide receiver Davante Adams #17 of the Green Bay Packers walks off the field after the Packers defeated the Minnesota Vikings 37-10 to win the game at Lambeau Field on January 02, 2022 in Green Bay, Wisconsin. (Phot

GREEN BAY, Wis. - The Las Vegas Raiders have made a blockbuster move to keep up in the AFC West, acquiring All-Pro receiver Davante Adams from the Green Bay Packers.

A person familiar with the move said Thursday the Raiders are sending the No. 22 overall pick in the April draft and additional compensation to the Packers to reunite Adams with his college quarterback, Derek Carr. The person spoke on condition of anonymity because the deal hadn't been announced.

NFL Network reported that Adams has agreed to a new five-year deal with the Raiders that will pay him $141.25 million in the richest deal ever for a wide receiver.

This was an aggressive move by the Raiders new regime led by coach Josh McDaniels and general manager Dave Ziegler and the latest in an AFC West arms race as teams try to catch Patrick Mahomes and the Chiefs. Denver traded for quarterback Russell Wilson and the Chargers acquired edge rusher Khalil Mack.

Now the Raiders are trying to keep pace and build on a 10-win season that sent them to the playoffs for the second time in the past 19 seasons.

Las Vegas potentially has one of the league's most dynamic offense with Carr having his best set of playmakers with Adams teaming with Pro Bowl slot receiver Hunter Renfrow, star tight end Darren Waller and running back Josh Jacobs.

Carr has a strong history with Adams, playing two seasons together in college at Fresno State. In their final year together in 2013, Adams had 131 catches for 1,719 yards and 24 TDs.

Now the next big move for the Raiders will likely be extending Carr's contract. He is playing on the final year of a five-year, $125 million deal and is in line for a lucrative extension now that the Raiders appear to be going all-in.

Adams has been one of the most productive receivers in the NFL in recent years. His 432 catches, 5,310 yards receiving and 47 TD receptions lead the NFL over the past four seasons.

He had 123 catches for 1,553 yards and 11 TDs last season when he made his second straight All-Pro team.

This trade comes less than two weeks after the Packers placed the franchise tag on Adams, a move that meant he would have been due to receive just over $20 million for the 2022 season if the two sides didn’t work out an extension before July 15.

FOX6 News caught up with Packers fans after news broke of the reported trade sending Davante Adams to the Las Vegas Raiders.

The franchise tag meant Adams would have been due to receive just over $20 million for the 2022 season if he and the Packers didn't work out an extension before July 15. Adams, who has said he wants to be the game’s highest-paid receiver, was asked late in the season about the prospect of getting the franchise tag.

"I’m not sure how to answer that safely right now," Adams said then. "So, we’ll just cross that bridge when we get to it. I’ll just say that. I like to be professional on here."

The 29-year-old Adams is the only player in NFL history to have at least 110 catches, 1,350 yards receiving and 11 touchdown receptions in three separate seasons.

Adams has joined Marvin Harrison and Larry Fitzgerald as the only players to have 600 catches, 8,000 yards receiving and 70 touchdown receptions over their first eight seasons.

His departure leaves a major hole in Green Bay's offense. The Packers have their MVP quarterback but must figure out who's going to catch Rodgers' passes.

The Packers return veteran Randall Cobb but aren’t certain to bring back any of their other proven wideouts.