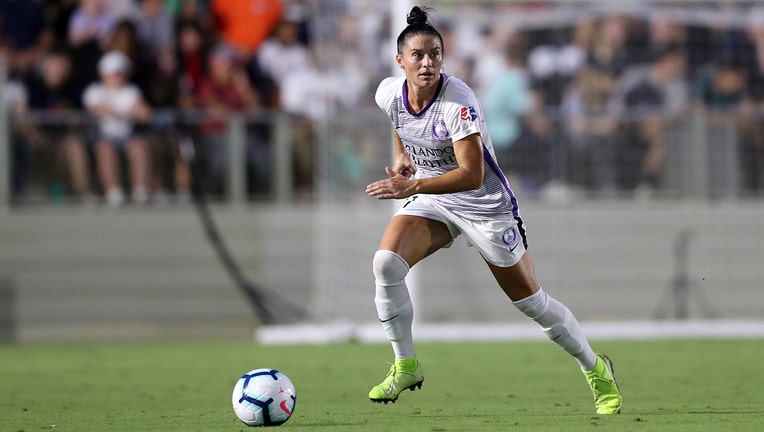 CARY, NC - SEPTEMBER 14: Ali Krieger #11 of the Orlando Pride plays the ball during a game between Orlando Pride and North Carolina Courage at Sahlen's Stadium at WakeMed Soccer Park on September 14, 2019 in Cary, North Carolina. (Photo by Andy Mead/

ORLANDO, Fla. - Orlando Pride defender Ali Krieger has been named to the National Women’s Soccer League (NWSL) Best XI for the 2019 season, announced today. The Best XI and Second XI are a result of voting conducted from October 17-22 among players, media, fans and owners/GMs/coaches.

Krieger appeared in 12 matches for the Pride this season, playing the entirety of each match she played to log 1080 minutes in 2019, with one assist to her credit. Her pass rate was 76.5%, averaging 37.7 passes per 90 minutes while her duel rate was 57.7%, alongside 47 clearances and a total of 16 interceptions. The 35-year old defender missed part of the season while away at the 2019 FIFA Women’s World Cup with the U.S. Women’s National Team, where she became a two-time World Champion.

The honor serves as Krieger’s second in her three seasons as a member of the Pride, earning the same recognition in her first season with the Club in 2017 when she helped lead the Pride to its first playoff appearance. As a member of the Washington Spirit, she was also named to the Best XI in 2014 and Second XI in both 2013 and 2016.

Since joining the Pride, she has appeared in 55 matches, registering five assists. Krieger is one of three members of the Pride to have reached 100 appearances in NWSL play, with 118 caps through her seven seasons in the league.

The full list of the Best XI and Second XI can be found below: