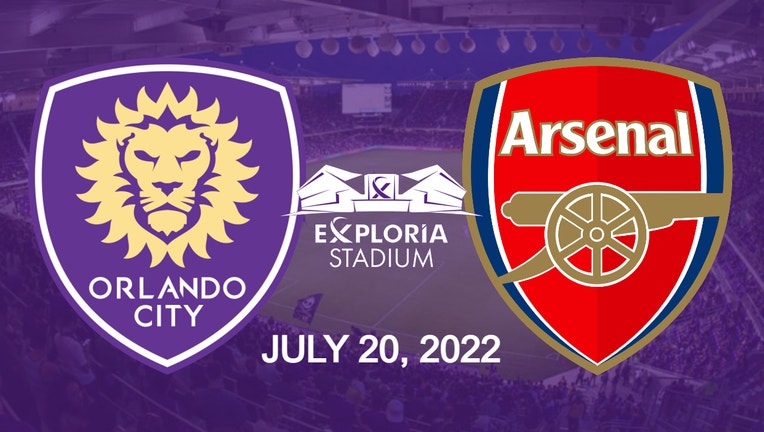 ORLANDO, Fla. - Orlando City SC is set to host one of the most recognized clubs in the world, English Premier League side Arsenal FC, in a friendly on Wednesday night at Exploria Stadium. Kickoff is set for 7:30 p.m. ET as part of Arsenal's US Tour in conjunction with Florida Cup’s FC Series.

"This game is a unique opportunity for us to host one of Europe’s most recognized teams at Exploria Stadium," said City EVP of Soccer Operations and General Manager Luiz Muzzi upon announcement of the match. "This is a great way for our players to get high-level gameplay and for our fans to see us match up with a very exciting Premier League opponent. We’re looking forward to it."

Wednesday’s match will serve as the first-ever meeting between the two sides all-time. The London-based club is visiting the United States this summer as part of the "FC Series," a national expansion of the Florida Cup, held in the state since 2015 featuring clubs from across the globe.

The Lions will enter the match following a 1-1 draw at Atlanta United on Sunday as part of MLS Heineken Rivalry Week. City struck first thanks to a free kick from just outside the area with Mauricio Pereyra curling his strike directly into the top-left corner of the net, marking his first goal of the campaign to go along with his team-leading nine assists.

Arsenal has a storied history in England, having won a record 14 FA Cups, two League Cups, 16 FA Community Shields, one European Cup Winners’ Cup and 13 EFL and Premier League titles, including an undefeated season in the 2003-04 season. Founded in 1886, Arsenal has gone on to become one of London's most successful football clubs and one of the most famous names in modern football with millions of passionate supporters worldwide.

The Gunners are most recently coming off a 2-0 victory over fellow Premier League Side Everton at M&T Bank Stadium in Baltimore, Maryland. Arsenal was backed by goals scored by new offseason signing Gabriel Jesus in the 33rd minute and Bukayo Saka, who scored three minutes later. Jesus completed his signing with Arsenal in early July and has scored three goals in two appearances so far for the club.

Following Wednesday’s friendly, the Lions will return to MLS play and welcome the first place Philadelphia Union to Exploria Stadium on Saturday, July 23. Kickoff is set for 7:30 p.m. ET with the match set to be locally televised on FOX35 PLUS and LionNation TV.