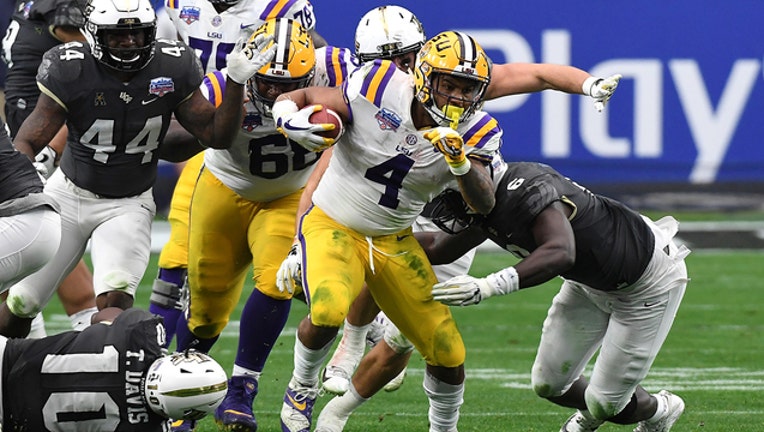 GLENDALE, Ariz. (AP) - Joe Burrow shook off a vicious early hit to throw for 394 yards and four touchdowns, helping No. 11 LSU end No. 7 Central Florida's 25-game winning streak with a 40-32 victory in the Fiesta Bowl on Tuesday.

LSU (10-3, No. 11 CFP) started its first Fiesta Bowl without several key players on defense and fell into an early 11-point hole against the high-scoring Knights (12-1, No. 8 CFP).

The Tigers clawed back behind Burrow and a defensive front that made life difficult for UCF quarterback Darriel Mack Jr.

Burrow was slow getting up after being blindsided by 313-pound defensive lineman Joey Connors on an interception return for a touchdown in the first quarter. LSU's junior quarterback returned to the game and picked apart UCF's secondary, hitting 21 of 34 of passes, including two touchdowns to Justin Jefferson.

LSU sacked Mack five times and made him rush numerous throws, holding the nation's third-best offense to 250 total yards - 295 below its average - while spoiling the Knights' bid for a second-straight self-proclaimed national title.

Taj McGowan scored on a 2-yard run and the Knights converted a 2-point conversion to pull UCF to within 40-32. After LSU recovered the onside kick, the Knights' last-ditch attempt ended on a tipped interception.

UCF declared itself national champions after finishing as the only undefeated FBS team a year ago. The Knights earned another shot at an undefeated season by staging a massive rally to beat Memphis in the American Athletic Conference title game.

Just like last year, UCF was on the outside looking in when the CFP final four was announced, adding to the boulder-sized chip on its shoulder and only a self-awarded national title in its reach.

The Speedy Knights got the Fiesta Bowl off to a fast start, going up 14-3 on Joe McCrae's 25-yard TD run and Brandon Moore's 93-yard interception return.

The Tigers roared back behind Burrow and their disruptive defensive front.

Burrow shook off the big hit on the pick six, finding Jefferson on a pair of scoring passes and a 49-yard TD to Derrick Dillon.

UCF sputtered offensively after its opening drive, but Mack hit Gabriel Davis on a 32-yard pass to pull UCF to within 24-21 at halftime.

Burrow opened the second half with a 32-yard TD pass to Ja'Marr Chase, and Cole Tracy hit three field goals to put LSU up 40-24. Tracy's final kick, the 97th of his career, broke the NCAA all-division record and sent LSU to its first 10-win season since 2013.

Even depleted, LSU's defense proved to still be formidable and Burrow showed his grit after the big hit.

UCF missed injured two-time AAC player of the year McKenzie Milton and had no answer for LSU's passing game.

LSU: RB Nick Brossette is a senior, Clyde Edwards-Helaire is just a sophomore and Burrow will be back. S Grant Delpit, the ninth consensus All-American in program history, also is a sophomore and most of the defense should be back.