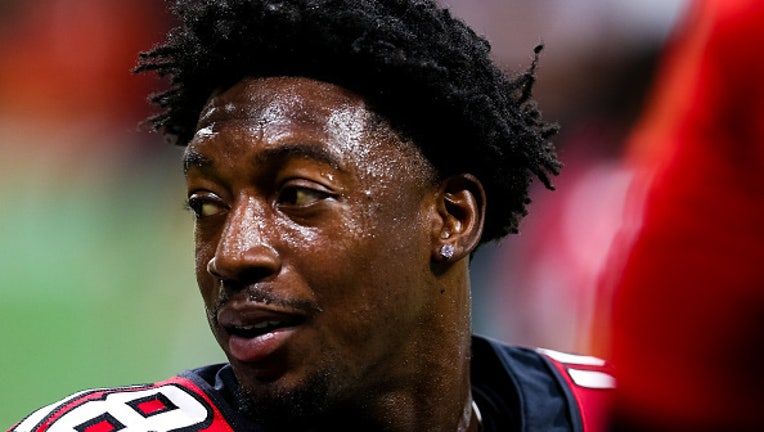 ATLANTA, GA - SEPTEMBER 15: Calvin Ridley #18 of the Atlanta Falcons looks on prior to the start of a game against the Philadelphia Eagles at Mercedes-Benz Stadium on September 15, 2019 in Atlanta, Georgia. (Photo by Carmen Mandato/Getty Images)

ATLANTA - The NFL is suspending Atlanta Falcons wide receiver Calvin Ridley for at least the 2022 season after a league investigation found he bet on NFL games in 2021.

The league said the allegations happened in November 2021 while Ridley was away from the team. Ridley appeared in five games during the 2021 season before he took a leave of absence, sighting mental health.

Investigators found no evidence Ridley used inside information or that any game was compromised. The league statement said coaches, staff, teammates, or other players were not involved.

CALVIN RIDLEY ‘STEPPING AWAY’ FROM FOOTBALL FOR MENTAL HEALTH REASONS

"There is nothing more fundamental to the NFL's success - and to the reputation of everyone associated with our league - than upholding the integrity of the game. This is the responsibility of every player, coach, owner, game official, and anyone else employed in the league. Your actions put the integrity of the game at risk, threatened to damage public confidence in professional football, and potentially undermined the reputations of your fellow players throughout the NFL.

"For decades, gambling on NFL games has been considered among the most significant violations of league policy warranting the most substantial sanction. In your case, I acknowledge and commend you for your promptly reporting for an interview, and for admitting your actions."

Ridley issued multiple tweets after news of his suspension broke.

"I couldn't even watch football at that point," he wrote.

"Just gone be more healthy when I come back," he said.

The Falcons responded to the suspension:

Ridley can appeal his suspension. He can apply for reinstatement after Feb. 15, 2023.

Ridley missed two games in 2021 for a "personal matter" before announcing he would take time away from the team. Ridley was placed on the non-football illness list following Week 8.

"These past few weeks have been very challenging and as much as I’d like to be on the field competing with my teammates, I need to step away from football at this time and focus on my mental wellbeing," Ridley wrote on Twitter. "This will help me be the best version of myself now and in the future."

The Falcons drafted Ridley 26th overall from Alabama during the 2018  NFL Draft.

Ridley made the Associated Press All-Pro Second Team in 2020 when he led the Falcons with 1,374 yards receiving on 90 catches.