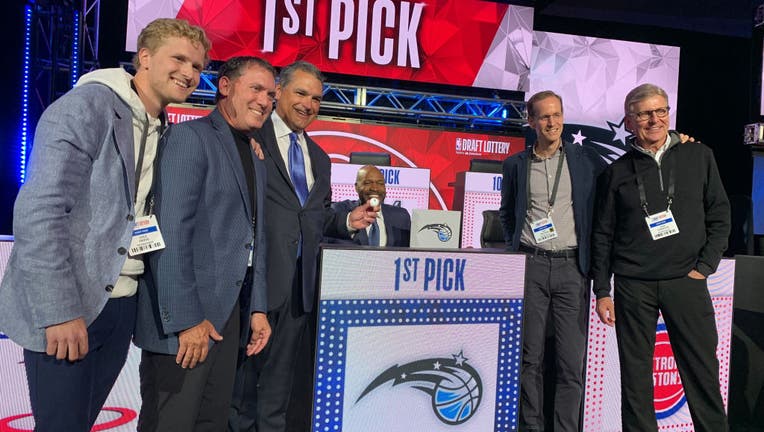 ORLANDO, Fla. - Thursday will be one of the biggest days in franchise history for the Orlando Magic, as they hold the no. 1 pick in the 2022 NBA Draft.

Which player will hear their name called first? The team's president of basketball operations, Jeff Weltman, said during a media session on Monday, that it's a toss-up among all 60 players.

Smith is a solid two-way player and proved that he's a consistent three-point shooter, with the ability to defend the 1-4 positions on the floor.

Holmgren's is 7-foot, 195 pounds, and has been described as a "unicorn" by many basketball analysts. Holmgren's tall and lanky, but he handles the ball like a guard and creates shots for himself. Oh yeah, and can't forget to mention he's a great rim protector. Holmgren averaged 9.9 rebounds for the Zags last season.

If the Magic draft Holmgren, he'll be reunited with his former AAU and high school teammate, Jalen Suggs.

Banchero is confident that he's the best player in this year's draft. Weltman never confirmed whether he worked out with the team or not. But he's been called the most "NBA-ready" player out of this draft.

Banchero averaged 17.2 points, 7.8 rebounds, and 3.2 assists for Duke as a freshman, helping lead the Blue Devils to a Final Four appearance.

The Magic have only picked first in the NBA Draft three other times. The first time in 1992, selected future hall of fame, big man, Shaquille O'Neill, Chris Webber in 1993, eventually trading him to Golden State for Penny Hardaway, and Dwight Howard in 2004 – all franchise-changing players.

The Magic hope to get it right again on Thursday night.