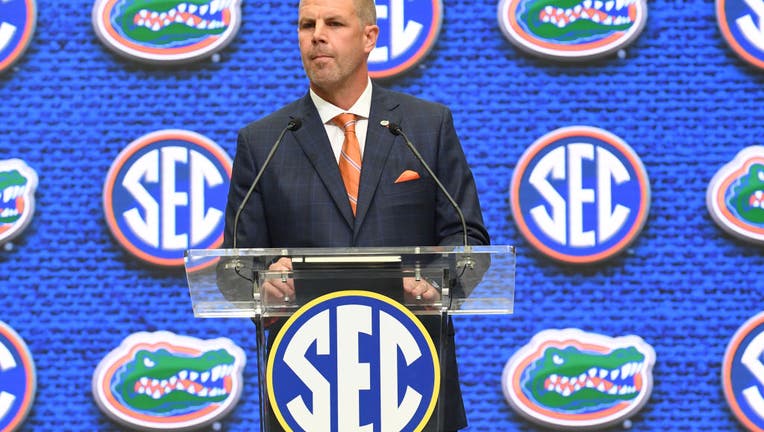 GAINESVILLE, Fla. (AP) - Billy Napier says his wife was "burning me up" over the weekend with questions about Florida’s most daunting season opener in school history.

Napier, thankfully, had all the answers. His players probably would have, too.

The first-year Florida coach has mapped out every aspect of the team’s routine heading into his debut Saturday night against seventh-ranked Utah. Walkthrough at the hotel? Check. Pregame meal? Check. Bus ride to the stadium? Check. Gator Walk among fans? On-field warmups? Celebratory entrance into the Swamp? Check, check, check.

The detail-oriented Napier, who makes his team wear matching white socks for every practice, has planned, plotted, and perfected every minute of each day.

"I think preparation is the key to confidence," Napier said.

If so, the Gators should be feeling like 10-point favorites by now.

It remains to be seen how much of a difference all those discussions and dress rehearsals will make when underdog Florida takes the field against the defending Pac-12 champions, who ended last season with a loss to Ohio State in the Rose Bowl.

Athletic director Scott Stricklin hired Napier days later, tasking him with leading the Gators back to prominence after 13 years without a Southeastern Conference or national championship.

One of Napier’s first tasks, as cliché as it sounds, was to instill more discipline in a program that clearly lacked it in recent years. The Gators lost at home to reeling LSU in 2020 because cornerback Marco Wilson tossed an opponent’s shoe following a third-down stop, and they ranked 13th in the SEC and 122nd in the country last year in penalties.

"He came in and structured everything," tight end Dante Zanders said.

"He wants to make sure everything is prepared so that when it comes down to the game, there’s no excuses to where: ‘Oh, I didn’t know I needed to be here. I forgot this. I left this at home. Or, oh, I forgot that we had meetings at this time,’" Zanders said.

The Gators have every reason to be amped up for Utah, a 2 1/2-point favorite according to FanDuel Sportsbook. Florida has lost 10 of its last 16 games, and few outsiders would put the once-proud program in any category other than rebuilding mode; Napier’s team was picked to finish fourth in the SEC’s Eastern Division.

"We have a chip on our shoulder this year," punter Jeremy Crawshaw said. "We want to prove ourselves. We’re coming for everything. … We knew we didn’t play up to our standard last year, but we’ve come hungry every time, every practice, every lift session, every film session. We’re hungry, and we’re talking about it."

Florida’s opener has been talked about for months. It marks the first in a series of high-profile games Stricklin has scheduled in recent years, a list that includes North Carolina State, Cal, Colorado, Arizona State, Texas and Notre Dame.

The game is sold out, and more than 10,000 Utah fans are expected to be in Gainesville – maybe even in the Swamp – as the Utes begin defense of their conference title with their highest preseason ranking ever.

And no first-year Florida coach has lost his debut since Charley Pell in 1979. Hall, Spurrier, Ron Zook, Urban Meyer, Will Muschamp, Jim McElwain, and Mullen won their debuts by an average score of 46-10.

Of course, none of those guys opened against a ranked team. Florida has played just two ranked teams to start seasons — No. 7 Houston in 1969 and No. 15 Miami in 1982 — and won both.

Napier welcomed the challenge and called it a "carrot" for his team. Nonetheless, he admittedly has felt better about openers before. After all, he was at Louisiana-Lafayette the last four years, and the routine there had become more ingrained with every season.

Napier expects to have jitters, maybe even butterflies and goosebumps, as he jogs into the packed Swamp for his first real game. No number of mock-ups – or questions from his wife — would help him avoid those.

"I don’t think I’m ever going to be beyond that," he said. "I think, as a competitor, football in particular, you work the entire year and you only get so many opportunities to compete.

"I think what I’ve learned over time is the important part is that how do you get to a place where you are well prepared and you have confidence."