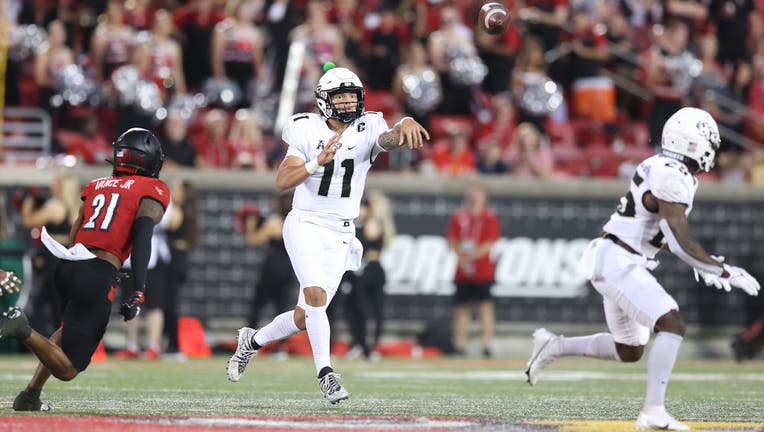 LOUISVILLE, KENTUCKY - SEPTEMBER 17: Dillon Gabriel #11 of the UCF Knights throws a pass against the Louisville Cardinals at Cardinal Stadium on September 17, 2021 in Louisville, Kentucky. (Photo by Andy Lyons/Getty Images)

LOUISVILLE, Ky. (AP) - Jaylin Alderman returned an interception off a tipped pass for a 66-yard touchdown with 13 seconds remaining, giving Louisville a 42-35 win over UCF on Friday night.

The Knights appeared primed to win the back-and-forth after intercepting Louisville’s Malik Cunningham off a deflection on the previous play for possession at the Cardinals 41 with under a minute to play. But Alderman was there to snatch a tip of Dillon Gabriel’s pass on the next snap, then found room down the right sideline for the TD to spark a delirious celebration for Louisville.

UCF (2-1) attempted several laterals on the game’s final play before being penalized for an illegal forward pass that closed the victory for Louisville (2-1).

Cunningham ran for two touchdowns and threw for another TD in helping Louisville. He was 23-of-38 passing 265 yards and rushed 13 times for 99 yards.

UCF drove 87 yards in eight plays to tie the game at 35 as Gabriel scored on a 6-yard touchdown run with 1:21 left in the fourth quarter. Gabriel passed for three touchdowns and ran for another, completing 21 of 28 passes for 188 yards.

Louisville used trickery to lead 35-28 when receiver Braden Smith completed a 45-yard pass to a wide-open Trevion Cooley for the TD. That came after UCF tied the game at 28 early in the fourth quarter on Gabriel’s 6-yard TD pass to Brandon Johnson.

UCF: An offense averaging 622 yards per game coming in encountered more resistance from the Cardinals but succeeded when they needed to stay even. But after snatching a late interception that might have set up the Knights to win, they gave it right back off a fateful tip and couldn’t stop Jaylin Alderman’s fast return. Speed was key in this game, and their failure to slow the Cardinals in such moments proved to be the difference.

Louisville: The Cardinals did what they needed to do to stay competitive, slowing down the Knights and giving the offense opportunities to establish tempo and lead twice in a back-and-forth contest. Cunningham’s impact with his arm and feet was critical as Louisville outgained UCF 501-420, even while hobbled in the second half. Defense came up big in one of their gutsiest efforts in a while.

UCF has a bye before opening AAC play at Navy on Oct. 2.