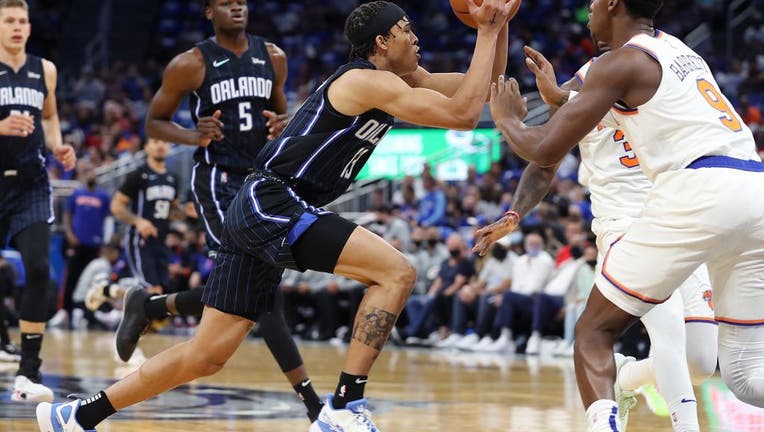 ORLANDO, Fla. (AP) - As Tom Thibodeau headed in for his postgame news conference following the New York Knicks’ 121-96 rout of the Orlando Magic on Friday night, a fan implored the notoriously grumpy head coach to "be happy."

Thibodeau certainly has plenty to be pleased about these days, with his Knicks off to a 2-0 start for the first time since the 2012-13 season.

Julius Randle had 21 points and 10 rebounds, Evan Fournier added 18 against his former team and New York hit a franchise-record 24 3-pointers to cruise past the rebuilding Magic.

"I think it’s a reflection of team playing for each other and just making the right play," Thibodeau said after the Knicks followed up Wednesday’s double-overtime defeat of Boston with an easy win. "We talked about it a lot of wanting to shoot more 3s, but we want them to be the right 3s. When the second defender comes, guys are making the right read."

The Knicks led by 31 points in the second quarter and pushed the advantage to as much as 34 early in the second half. The Magic (0-2) were hardly competitive.

"Honestly, we just played the right way," Fournier said. "We just shared the ball, tried to be aggressive, and make the right play. It was a result of good offense."

"We got spread out too much tonight and I’ll have to go back and look at the film to see where we got spaced because (New York) spread the floor really well," Orlando coach Jamahl Mosley said. "Early on, (the Knicks) were making the extra pass and knocking down shots."

Fournier, who starred for Orlando from 2014-21 before being traded last spring, made four 3s. He had plenty of support from Knicks fans at Amway Center.

"That was a home game," Fournier said. "My goodness, I’ve been in this building many times and I felt like I was at home tonight."

MCGRADY IN THE HOUSE

Tracy McGrady, a consultant for the Magic, was at the Amway Center for the ceremonial jump ball toss. When asked why he — a recent inductee to the Naismith Basketball Hall of Fame — was left off the NBA’s 75 greatest players list, McGrady said, "That’s what the whole basketball world wants to know."

Knicks: New York led by 24 before the game was 13 minutes old. ... Thibodeau said center Nerlens Noel, who missed his second straight game with a sore left knee, is "getting close" and he’s "moving along, and when he’s ready, he’ll go." ... Thibodeau said friend and former Magic coach Steve Clifford gave him a solid scouting report on Fournier. "I had known about (Fournier) from the time I spent down here and with the way (Clifford) talked about him. (Fournier) doesn’t get rattled and he’s not afraid of big moments."