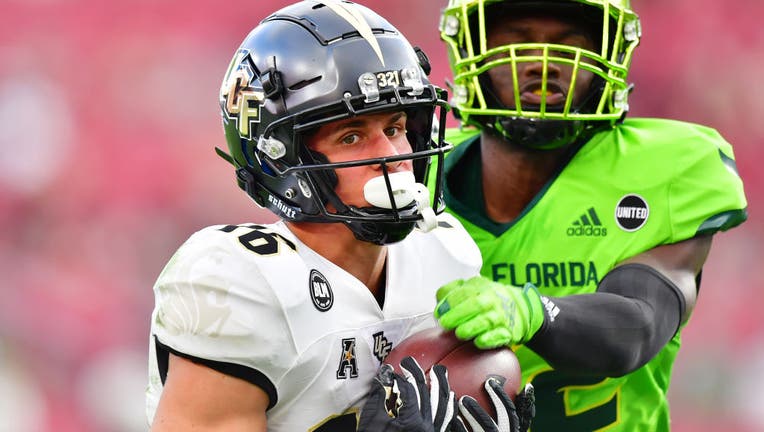 Tre Nixon #16 of the UCF Knights catches a 51-yard pass thrown by Dillon Gabriel #11 during the second quarter against the South Florida Bulls at Raymond James Stadium on November 27, 2020 in Tampa, Florida. (Photo by Julio Aguilar/Getty Images)

Gabriel was 22-of-36 passing for 336 yards and four touchdowns with an interception and scored on a 12-yard run late in the third quarter. Harris finished with five receptions for 110 yards. Greg McCrae had 25 carries for 130 yards and a score and Ben Thompson added 110 yards rushing and two TDs on 16 carries for UCF (6-3, 5-3 American Athletic Conference).

Jordan McCloud had 404 yards passing and four touchdowns with no interceptions for the Bulls. Bryce Miller had 11 receptions for 121 yards and two TDs and DeVontres Odoms-Dukes had scoring catches of 23 and 14 yards.

Dwayne Boyles intercepted a pass by Gabriel near midfield and three plays later Brian Battie scored on a 1-yard run to trim USF's deficit to 45-38 with 10:10 to play. The Bulls defense then forced UCF to go three-and-out but, on the next play from scrimmage, Divaad Wilson forced fumble that was recovered by Keenan Hester. Three plays later on fourth-and-7 at the USF 37 — with the Knights clinging to a 7-point lead — Gabriel hit O’Keefe for a 12-yard gain. After USF was penalized for having 12 men on the field, McCrae scored on a 20-yard run to make it 52-38 with 6:34 remaining.

UCF, which recovered two Bulls fumbles, went into the game leading the nation with 20 forced turnovers and 11 fumble recoveries.

The Knights have won four games in a row in the War on I-4 rivalry and are 6-6 all-time against USF.

USF (1-8, 0-7) played for the first time since Nov. 14 after having its game against Navy postponed last Saturday. The Bulls have lost eight games in a row following a season-opening win over The Citadel.