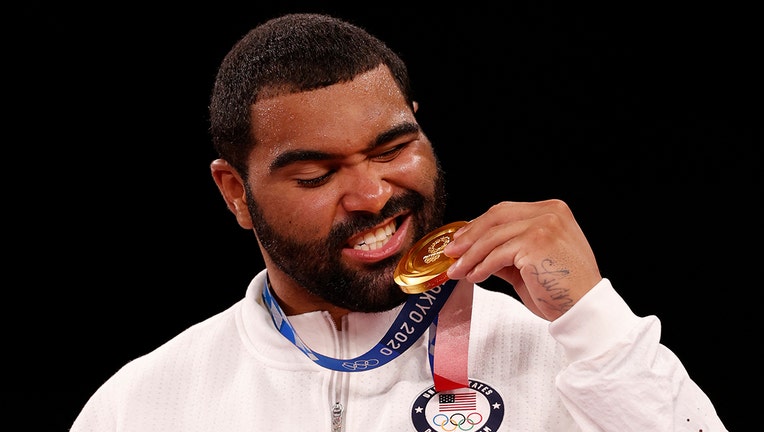 Gold medalist USA's Gable Dan Steveson poses with his medal on the podium after the men's freestyle 125kg wrestling competition during the Tokyo 2020 Olympic Games at the Makuhari Messe in Tokyo on August 6, 2021. (Jack GUEZ / AFP)

MINNEAPOLIS (FOX 9) - It appears University of Minnesota star wrestler Gable Steveson is going to get the best of both worlds with his ability to compete with flare, put money in his pocket and chase championships.

Steveson announced Thursday morning he’s signed a deal with World Wrestling Entertainment. That’s right, WWE, to profit off his name, image and likeness. Minutes after making that news, Steveson also made it official that he’s coming back to the Gophers’ wrestling program for another season.

Former Gopher Gable Steveson was greeted by a crowd of fans on Sunday as he returned home after winning gold at the Tokyo Olympic Games.

"We always wanted what was best for Gable, and we understood he had a lot of great opportunities in front of him. We had a strong sense that he was going to return to the University of Minnesota, but until he made it official, anything could happen," Gophers coach Brandon Eggum said Thursday via Zoom. "We were just excited. We knew this day was coming or hoped that it was. It just says a lot about his character that he really feels he can still play a major role in the development of our program. He talks about it all the time that if you want to be the best, you should come to the University of Minnesota."

Once the NCAA approved NIL and college athletes could make money without losing eligibility, the questions surfaced about how it could be done within compliance. It turns out NIL might be helping keep Steveson a Gopher for at least one more year. He actually has two years of eligibility left.

Before NIL, college athletes forfeited their eligibility by entering financial agreements, most commonly by signing with agents before declaring for a draft. Now, they can be promoted in ads, commercials or with sponsorships for profit, and still be in college.

"Without NIL, I think the chances of him returning would’ve been small. That’s just my feelings," Eggum said. "He’s always said to us that he was coming back, but I wonder without the NIL and those opportunities from a financial standpoint, it might have been really difficult to say no to."

Steveson entered the national landscape earlier this summer after pulling off a stunning comeback at the Olympics. Trailing 8-5 with 13 seconds left in the gold medal match, Steveson rallied with four straight points, including a takedown at the buzzer. He had won gold, and followed with his customary back flip.

Eggum said his program his seen a boost in recruiting, and a bigger fan following since the Olympics. Casual fans were up at 5 a.m., watching Steveson win gold. Now, the hope is Steveson will help pack Maturi Pavilion for wrestling matches next year, much like how Lindsay Whalen filled Williams Arena in the early 2000s.

Steveson finished 17-0 for the Gophers last season, including a 9-0 mark in the Big Ten with four pins, three major decisions and seven technical falls. He also won the Hodge Trophy.

The logistics still have to be worked out, but right now NIL allows Steveson to be promoted as a professional wrestler, and still wrestle competitively with the Gophers. He still has Big Ten and NCAA titles to chase.

"There is the opportunity from my understanding to do both if he wanted to. He could be competing for us in a dual on Friday night, and maybe flying out and stepping in the ring on Saturday somewhere else for the WWE," Eggum said.