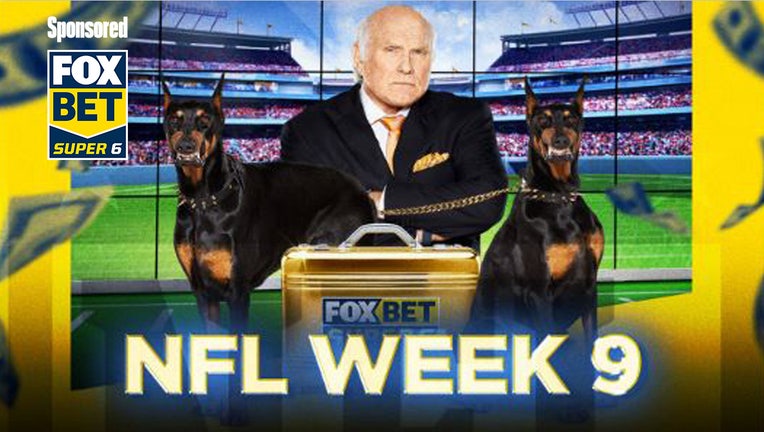 The FOX Bet Super 6 NFL Sunday Challenge jackpot is $100,000. Find out how you can win this big cash prize in Week 9 of the NFL season! (FOX Sports)

NFL Week 9. The halfway mark of a long, grueling season.

This year, the League has seen some unfortunate injuries, unexpected underdog wins and disappointing campaigns by teams and players who are usually at the peaks of their games.

And like a long race, the halfway point of this NFL season might be the most challenging. In a marathon, the 13.1 mark is tricky and treacherous. That's the point where you marvel at how far you've come while shuddering to think about how far you've still got to go.

And that's what all the players taking the gridiron in Week 9 are likely saying to themselves, "almost there, almost there."

Now, for us mere mortals. We aren't running the same race as these world-class athletes, but we have a chance to break some sweat while playing a fun game of our own. That game is the FOX Bet Super 6 NFL Sunday Challenge.

FOX Bet Super 6 is a free-to-play contest where you pick the winners of all six marquee games with their margins of victory for a chance to win $100,000 in our NFL Sunday Challenge. Just download the FOX Bet Super 6 app on your phone or mobile device, make your picks and submit your selections before Sunday’s games kick off.

By the end of the weekend, you could be $100,000 richer. No sprint-interval training required. No cleats and pads necessary. Just you, your app, six games and your picks.

It's that easy, it's always free, and it's so much fun. Oh, and people really do win!

So put on your best training gear — or not — and get in on the action. But before you do, we're here to help.

Check out our predictions for the Week 9 marquee matchups!

It seems the Falcons do everything in their will to give away games. Had it not been for Panther DJ Moore's ill-advised celebration that lengthened Carolina's PAT kick, the Falcons might have fallen to their division rival last week.

But, alas! The Falcons improved to 4-4 in Week 8, and they're atop the NFC South. But what happens when the Chargers bolt into the A in Week 9?

ATL is 6-2 against the spread (ATS), so we expect the Dirty Birds to cover the +3 at FOX Bet. And considering quarterback Marcus Mariota is 9-5 ATS as a home underdog in his career, the trends certainly lean toward an Atlanta cover.

But we're going Chargers when it comes to a straight-up (SU) win in this contest.

The Bolts are coming off a bye week, so they've had time to hit the reset button after their Week 7 loss to Seattle. The Chargers have only allowed 10 sacks this season, the fewest in the NFL. And running back Austin Ekeler has already racked up 53 receptions. At this pace, he's on track to have 128 receptions on the year, which would be a single-season record for an RB.

The bye week and the spark that Austin will give this offense make us lean LAC.

Prediction:
Chargers by 1 to 2 points

We told you this last week, and we'll tell you again. Fade the Panthers.

We almost feel bad for picking on the Panthers each week, but they make it too easy. They're 2-6 SU and 3-5 ATS. And now they're taking those awful records into Week 9 against a Bengals team that got embarrassed by the Browns on Monday Night Football.

If you thought Carolina's game last week against the Falcons ended on an ugly note, wait until you see what an angry Cincinnati squad does to the Panthers.

Several years have passed since these two have squared off. The last meeting was in 2018 when the Panthers beat the Bengals 31-21. But these aren't yesteryear's Stripes.

Joe Burrow's 2,329 passing yards lead the NFL, and Vonn Bell's four interceptions are tied for best in the league. When Burrow's the favorite as a starter, he has gone 10-6 SU. Guess what the line is at FOX Bet this week? Joe Cool & Co. are 7.5-point favorites over Carolina.

Prediction:
Bengals by 11 to 13 points

Yes, Green Bay's top receiving target Davante Adams jetted for the Raiders. And yes, we knew the Packers would have some obstacles trying to re-establish their offensive identity. But no, we did not know it would be this challenging for the Cheeseheads.

The Packers are 3-5 SU and 3-5 ATS, and Aaron Smartest Man in the Room Rodgers is holding no punches in letting the world know how he really feels.

Their Week 9 opponents, the lowly Lions, are having an even more challenging season. They're 1-6 SU, but unlike Green Bay, no one seriously had them winning the Super Bowl this season.

At FOX Bet, the Packers are 3.5-point favorites, and that's a line we like. That's mostly because Rodgers historically has had success against Detroit. He's 18-6 SU in career starts against the Lions. Also, the Packers have not lost five games in a row since 2008 — Aaron's first year as a starter.

We don't want to call this a bounce-back game because we don't expect Green Bay to look that good. So we'll call this a win for the Pack and a close one, at that.

Prediction:
Packers by 1 to 2

Go ahead and crown Kirk Cousins King of the NFC North but not because he's some QB phenom. Actually, his numbers so far this season have been average. Cousins' 11 TDs rank 10th in the league, and his 1,734 passing yards rank 14th. But the Vikes have rolled to a 6-1 overall record. So even if he's not the reason they're winning, he's certainly not causing them to lose.

In this league, that matters. Just ask 2019-era Jimmy Garoppolo.

And speaking of average, the Commanders have staked their claim on mediocrity this season, too. They're 4-4 SU and ATS. However, their comeback win against the Colts last week showed how gritty this squad can be with backup QB Taylor Heinicke at the helm. But grit won't save them this weekend when they face the Vikes.

On defense, Za'Darius Smith's 13 tackles for loss are the best in the NFL. On offense, running back Dalvin Cook recorded a season-high 111 rushing yards in Week 8. So again, Cousins at QB is a very small piece of the successful puzzle in Minnesota. But the Vikings are still successful, nonetheless.

It's hard not to love the Hawks right now. Well, that is if you're not a fan of the Rams, Niners or Cardinals. But Geno Smith's redemption arc as the Seahawks' starting QB in the wake of Russell Wilson's departure has been a marvelous storyline.

Geno has passed for 1,924 yards this season, 13 TDs and has thrown only five interceptions in eight games. Seattle has made it to November with a winning 5-3 record. That's pretty impressive, especially considering this is a team whose preseason Super Bowl odds were +9000. Those odds, by the way, have shortened to +2500.

But back to the NFC West matchup at hand. If you couldn't tell from our ode to Geno & Co., we're backing Emerald City.

The Seahawks have defeated the Cardinals in three of the teams' last four matchups, including Week 6 of this season. Geno leads the NFL with his 72.7% completion rate. Wide receiver Tyler Lockett is breaking records, too. He caught his 48th-career receiving TD in Week 8 and has the third-most receiving TDs in franchise history. Perhaps Tyler was onto something when he noted why the Seahawks have done well this year.

Whether it was Kyler's contract standoff, the study-clause controversy or some other riff that Twitter detectives have yet to uncover, something's amiss in AZ. And against this inspired Hawks team, opponents have got to bring their A-game.

Prediction:
Seahawks by 8 to 10 points

Both the Titans and Chiefs come into this Sunday Night Football battle with 5-2 records, but FOX Bet oddsmakers have the Chiefs as -12.5-point favorites in this one. Is Kansas City currently that much better than Tennessee?

Well, let's dive into it.

After a bye week, KC, under coach Andy Reid is 7-2. The Chiefs lead the league in scoring offense and rank third in rushing defense. Tight end Travis Kelce leads all NFL tight ends in receptions, receiving yards and touchdowns.

This weekend, the biggest threat to the Chiefs will be Titans' running back Derrick Henry. King Henry had a season-high of 219 rushing yards in Week 8. He's freakishly athletic and hard to contain, but if KC can stop Tennessee's run game, a Week 9 win is in the Chiefs' future.

Prediction:
Chiefs by 8 to 10 points

Now, it's your turn to jump in and win some money!

After you download the app and submit your selections for the upcoming contest, be sure to share your picks with us by tagging @FOXSuper6 and @EricaReneeD and use the #EricaSuper6 hashtag across all social media platforms.

We're rooting for you!