Fight breaks out at Panthers-Pats practice for a second day

A woman was injured when players from the Panthers and Patriots scuffled for a second day during their joint practice.

FOXBOROUGH, Mass. - A day after a pair of fights resulted in five players being kicked out of the first joint practice between the Panthers and Patriots, two more incidents — including one in which a female fan was struck after a scrum spilled into the spectator area — nearly brought an end to Wednesday’s practice session.

"Number one, my thoughts are with the woman that was hurt over there. I’m hoping that she’s OK," Panthers coach Matt Rhule said after practice. "I don’t have any update on her, but I’m hoping she’s OK."

The first dust-up occurred during a kickoff return drill after Panthers safety Kenny Robinson — one of the players ejected in Tuesday’s tussles — laid a big hit on Patriots receiver Kristian Wilkerson and stood over him, taunting him. Several of Wilkerson’s teammates, including special teams captain Matt Slater, took issue with it and it led to some brief pushing and shoving.

Wilkerson remained down as he was attended to by the training staff. He eventually made his way to a cart before being driven off. Slater said afterward that Wilkerson was being evaluated "off site" because of his injuries.

"That’s cause for concern," Slater said. "We’re not going to sit here and celebrate those type of plays. That’s not how we’re going to do it. ... Look, I ain’t fighting. I got four kids, my wife’s out here. What I look like? I’m 36 years old. I’m not throwing a punch. 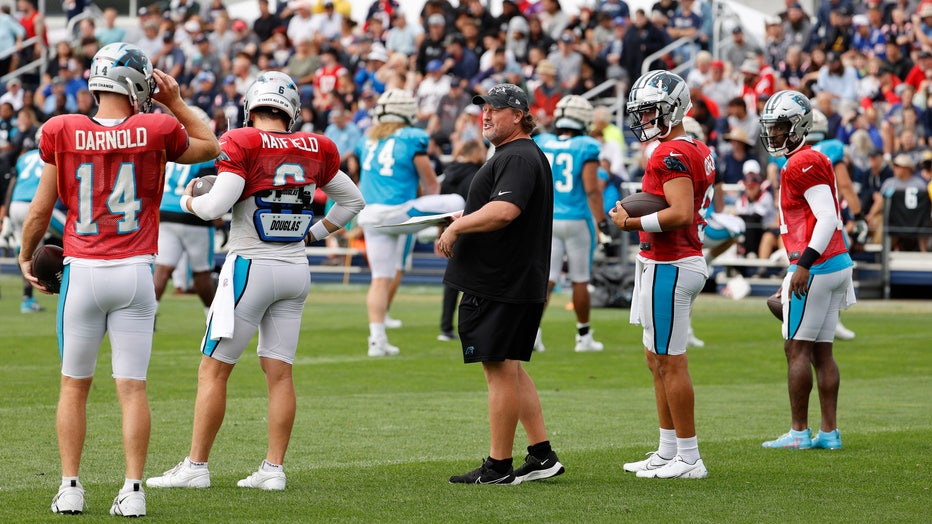 "But when you have a teammate who is hit, he’s down. There’s clearly symptoms of what has happened to him. We all know what they look like as football players. He’s demonstrating those symptoms and then you have players celebrating those acts, I take an issue with that."

Robinson was walked off the field by an assistant coach and practice resumed.

Just minutes later, during an 11-on-11 period, Carolina running back Christian McCaffrey was hit hard near the sideline, got to his feet and spiked the ball in direction of a Patriots player. It led to another scrum that spilled into the front row of a spectator area, striking at least one female fan. It also resulted in ejections for New England defensive lineman Deatrich Wise Jr. and Carolina running back Chuba Hubbard.

"It gets a little chippy out here sometimes. That’s the way it goes," McCaffrey said. "It is what it is. A little scrum. It happens. Football’s football. "You go to these joint practices — it’s part of the game."

NFL referees in attendance told Rhule that Hubbard threw a punch and they made the call to dismiss him.

The NFL was formed in 1920 when 10 football teams came together in Canton, Ohio, and started the American Professional Football Association (APFA), now known as the NFL.

"Obviously, we sent Kenny off the field. I didn’t see the hit, but I did see him standing over the player. That’s not how we want to practice," Rhule said. "Things happen in football. There were some good clean hits. But we don’t stand over somebody and taunt them. It can affect their livelihood. So we sent him off."

The teams meet in an exhibition game on Friday night.