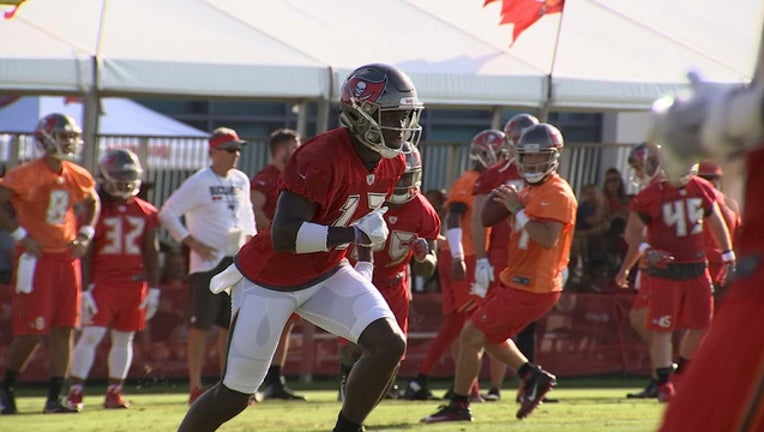 JACKSONVILLE, Fla. (AP) - The Tampa Bay Buccaneers and Jacksonville Jaguars are closing in on a decade of disappointment. To many, it probably feels even longer.

The cross-state teams last made the playoffs in 2007, a drought that spans three owners, six general manager, nine head coaches and 15 starting quarterbacks.

The similarities in their struggles are staggering yet not all that surprising: They missed repeatedly in the early rounds of the NFL draft and stumbled almost annually in free agency. They also failed miserably to find coaching stability, franchise quarterbacks and all-important pass-rushers.

The results are evident. The Bucs are 54-90 over the past nine years, including a 10-win season in 2010 and two nine-win campaigns. That's a decent record when compared to Jacksonville, which is a measly 42-102 during that span and has double-digit losses in each of the past six years.

"I feel like every organization has to go through turmoil," retired Jaguars running back Maurice Jones-Drew said.

"Not really turmoil, but adversity. I'm a big 'Shawshank Redemption' fan and my guy said he had to crawl through 500 feet of you-know-what to come out clean on the other side. That's what you have to go through in this game."

Tampa Bay and Jacksonville have been knee-deep in it for some time.

The Bucs have mostly struggled since firing Super Bowl-winning coach Jon Gruden following a four-game losing streak to end the 2008 season. They had a glimmer of hope under coach Raheem Morris and quarterback Josh Freeman in 2010, but that was short-lived.

Mike Glennon and Josh McCown followed at quarterback, along with coaches Greg Schiano and Lovie Smith. None of them proved to be the answer.

All of those were second-round picks who were supposed to help make up the core of the roster. All of those guys are either elsewhere or out of the league.

Jacksonville's draft-day difficulties have come mostly in the first round, with defensive end Derrick Harvey (2008), left tackle Eugene Monroe (2009), defensive lineman Tyson Alualu (2010), quarterback Blaine Gabbert (2011), receiver Justin Blackmon (2012) and left tackle Luke Joeckel (2013) getting paid millions to make little impact for the small-market franchise. None of them remain on the roster, and only Alualu stuck around long enough to get a second contract.

None of those mistakes will be on the field Thursday night when the Jaguars host the Buccaneers in a preseason game. They are distant and unsavory memories for front offices and fan bases.

Now, though, there's belief in both cities that the postseason dry spell could be ending soon.

Tampa Bay thinks Jameis Winston is a budding franchise quarterback and considers speedy DeSean Jackson and Pro Bowler Mike Evans among the top receiver tandems in the league. Gerald McCoy, Lavonte David and Kwon Alexander anchor a defense that was one of the NFL's best down the stretch in 2016, and second-year pro Sean Spence seems poised to give the team its first double-digit sack guy since Simeon Rice in 2005.

"I see why there's a lot of excitement. We have a really good team and a really good roster. So hopefully we all stay healthy and put in the work and we can reach our goal, which is the playoffs."

The Jaguars expect to have one of the best defenses in the league thanks to the emergence of cornerback Jalen Ramsey and the addition of defensive end Calais Campbell, cornerback A.J. Bouye and safety Barry Church. If pass-rushers Yannick Ngakoue and Dante Fowler Jr. make strides, it should be Jacksonville's best defensive unit in a decade.

New coach Doug Marrone is counting on it. He also plans to rely on a ground game featuring rookie Leonard Fournette. The idea is that better defense and a more stout ground game will take pressure off turnover-prone quarterback Blake Bortles.

"We have a chance to do some really good things," said veteran tight end Marcedes Lewis, the last link to Jacksonville's 2007 playoff team.

"It's hard for me to stand up here and make predictions - I really don't like doing that - but I think coming that first game, we're going to have our best product within the last decade on that field.

"I would like to be part of the team that gets us to where we should be. We haven't won here in a long time."