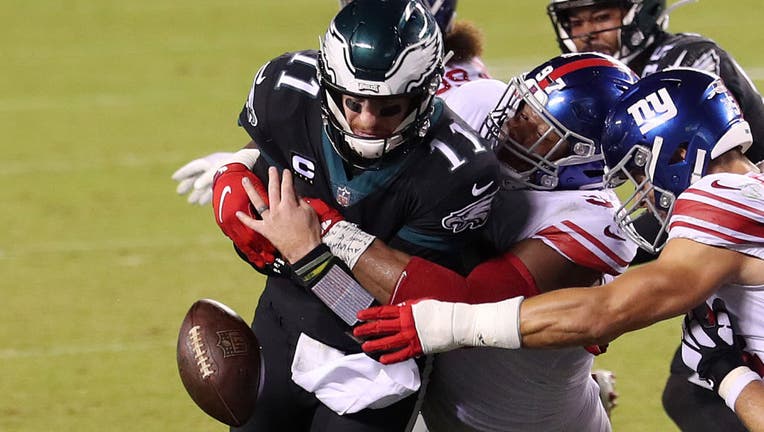 PHILADELPHIA, PENNSYLVANIA- OCTOBER 22: Dexter Lawrence #97 of the New York Giants forces a fumble on Carson Wentz #11 of the Philadelphia Eagles during a two point conversion in the fourth quarter at Lincoln Financial Field on October 22, 2020 in Ph

Wentz threw an 18-yard touchdown pass to Boston Scott with 40 seconds remaining and the Philadelphia Eagles overcame an 11-point deficit in the final seven minutes to beat the New York Giants 22-21 on Thursday night.

Wentz led a depleted offense to 22 fourth-quarter points only to miss a 2-point conversion at the end in a 30-28 loss to Baltimore on Sunday.

He wouldn’t be denied against the Giants.

“He battled, faced adversity, and hung in there,” Eagles coach Doug Pederson said. “He’s taking a step in the right direction to be one of the top quarterbacks in the league.”

Daniel Jones shook off a stumble that prevented him from an 88-yard touchdown run and had the Giants leading 21-10 following a 2-yard pass to Sterling Shepard with 6:17 left.

But Wentz rallied an offense missing eight starters. His 3-yard pass to Greg Ward cut it to 21-16. After the 2-point conversion failed, the Eagles got the ball at their 29 with 2:02 to go.

Wentz completed passes of 11 and 30 yards to Richard Rodgers. On third down from the 5, a defensive holding penalty gave the Eagles a first down at the 3. But three-time All-Pro center Jason Kelce was called for a facemask penalty that pushed it back to the 18.

Wentz threw a perfect strike to Scott and the backup running back made an excellent catch to give Philadelphia the lead. The 2-point conversion failed, but Jones was sacked by Brandon Graham and fumbled on the ensuing possession.

“We never faltered. We never panicked. We knew we were gonna win,” Scott said. “Carson led us and it was a great team effort.”

“This was huge for us,” Wentz said. “The NFC East is wide open.”

Wentz threw for 359 yards and two TDs and ran for a score. He was sacked three times and absorbed several hits.

Jones had only the end zone ahead of him away when he took off running from the Giants 12 in the third quarter. He was well ahead of everyone chasing him until he stumbled and got tackled before he could get up at 8.

A pass interference penalty against Nickell Robey-Coleman on third down gave the Giants another try, and Wayne Gallman ran in from the 1 to give them a 14-10 lead.

Jones’ 80-yard run was the longest by a Giants quarterback and tied for the fourth-longest in team history. Patrick Mahomes, the 2018 NFL MVP, couldn’t resist poking some fun at Jones. He tweeted: “I mean i can’t even say anything cause i would never be able to run that far either.”

“The focus is not frustration. The focus is on correcting mistakes and moving forward and that’s where we have to steer it as a team,” Giants coach Joe Judge said.

Jones threw a 39-yard TD pass to Golden Tate in the first quarter. He also had a pick and two turnovers. Evan Engram dropped a third-down pass in Philadelphia’s territory that would’ve prevented the Giants from punting the ball to the Eagles for their go-ahead drive.

“One hundred percent I have to make that,” Engram said. “We definitely let one get away. It’s just not a good feeling. We played a great fourth quarter and at the end, we didn’t finish.”

Questionable play-calling cost the Eagles early in the fourth quarter. Wentz completed a 40-yard pass to Travis Fulgham and the Eagles reached the 7 when Jalen Hurts came in to run an option and gained no yards. After Wentz ran to the 3, Pederson went for it on fourth down. The call was a fade to No. 5 tight end Hakeem Butler, who has no career catches. Logan Ryan broke it up.

Using a no-huddle often on the opening drive, Wentz led the Eagles 75 yards and ran in from the 1 for his fifth TD rushing to make it 7-0. Wentz scrambled 3 yards on fourth-and-1 to keep the drive going and connected with Richard Rodgers for 18 yards to the 1 to set up the score.

But the Eagles reverted to their mistake-prone ways until the final 6 1/2 minutes.

ADVERTISING: Download the FOX Super Six app for a chance at winning $1 million during NFL Sundays.