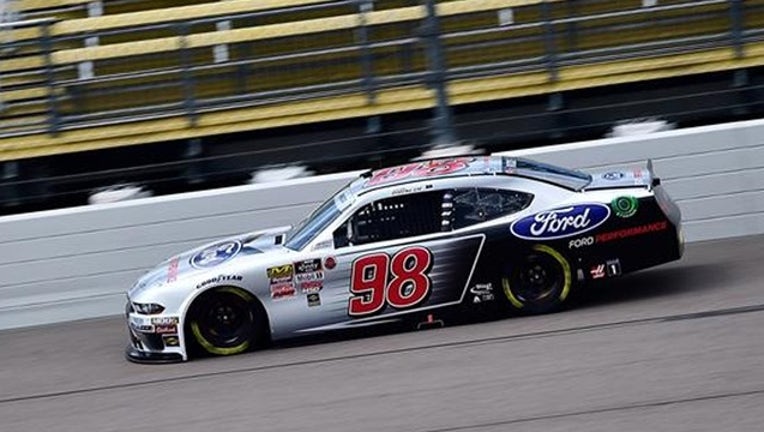 NEWTON, Iowa (AP) - Chase Briscoe passed Christopher Bell with seven laps to go and won the NASCAR Xfinity race at Iowa Speedway on Saturday night for his first victory of the year.

Briscoe's only other Xfinity victory came last season on Charlotte's roval. Briscoe's No. 98 Ford had been close all season, posting seven top-five finishes and 13 top-10s, but the 24-year-old Stewart-Haas driver finally broke through with a victory that felt like vindication.

"It's nice, for sure, to finally silence everybody," Briscoe said. "We definitely still aren't near where we need to be, but I feel like we've been way closer, these past couple of weeks especially."

Bell led a career-high 234 out of 250 laps, but old tires allowed Briscoe to take over and clinch a playoff berth in the No. 98 Ford.

Cole Custer, who entered the race in third place, got loose and crashed into the wall with 90 laps to go. He was 29th after first and second-place finishes in his last two starts.

Bell, a five-time winner in 2019, has been so dominant at Iowa that he owns the record for the most laps led despite racing the short track just five times.

But Bell missed on tire strategy, and a late restart gave both Hunter Nemechek and Briscoe a shot at the No. 20 Toyota.

Bell drove as hard as he could on the preferred high line, only to watch helplessly as Briscoe slid underneath to seal the win and begin his push to threaten the so-called "Big Three" of Bell, Reddick and Custer.

"We've still got to get better if we're going to beat the big three. But we're slowly getting into the conversation to be that fourth guy," Briscoe said.

Bell posted a top speed of 132.855 mph to win the pole for the fourth time this season earlier Saturday, with Briscoe also on the front row. Bell briefly lost his lead during a caution 15 laps from the end of the stage, but he still cruised to his 12th stage win.

The caution flag was dropped after Austin Cindric, fifth in the standings, lost a tire and went into the wall. The wreck knocked Cindric out of the race.

Bell dominated the second stage as well, leading every lap to earn yet another playoff point. But while Bell had the best car of the day, he didn't have the best tires.

Justin Haley finished eighth in his first race since Nick Harrison, his crew chief, died on Sunday of unknown causes. Harrison was 37.