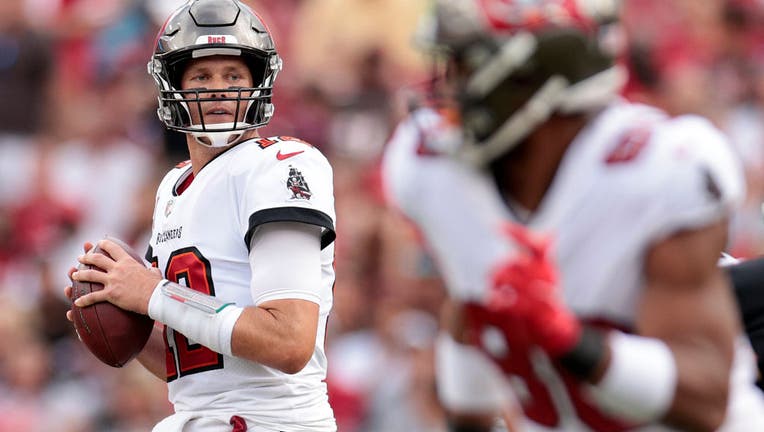 TAMPA, FLORIDA - SEPTEMBER 19: Quarterback Tom Brady #12 of the Tampa Bay Buccaneers looks to make a pass play against the Atlanta Falcons in the second quarter of the game at Raymond James Stadium on September 19, 2021 in Tampa, Florida. (Photo by D

TAMPA, Fla. (AP) - Tom Brady threw for 276 yards and five touchdowns, helping the Tampa Bay Buccaneers extend their winning streak to a franchise-record 10 consecutive games with a 48-25 victory over the Atlanta Falcons on Sunday.

Brady improved to 9-0 lifetime against the Falcons (0-2), who’ve lost seven in a row going back to last season, with three of those setbacks coming against the Bucs (2-0), who’ve outscored their NFC South rivals 124-62 over the past 10 quarters of those outings.

Rob Gronkowski caught a pair of TD passes for the third straight game, including the Super Bowl, as he and Brady continued to climb the career list for regular-season TDs by a passing duo with 88 — one behind Philip Rivers and Antonio Gates for second place behind Peyton Manning and Marvin Harrison (112).

Mike Evans also scored on receptions of 3 and 1 yards, the latter set up by Shaquil Barrett’s third-quarter interception of Matt Ryan, who fell to 0-6 against teams led by Brady, who rallied New England from a 28-3 deficit to beat Atlanta in Super Bowl 51. 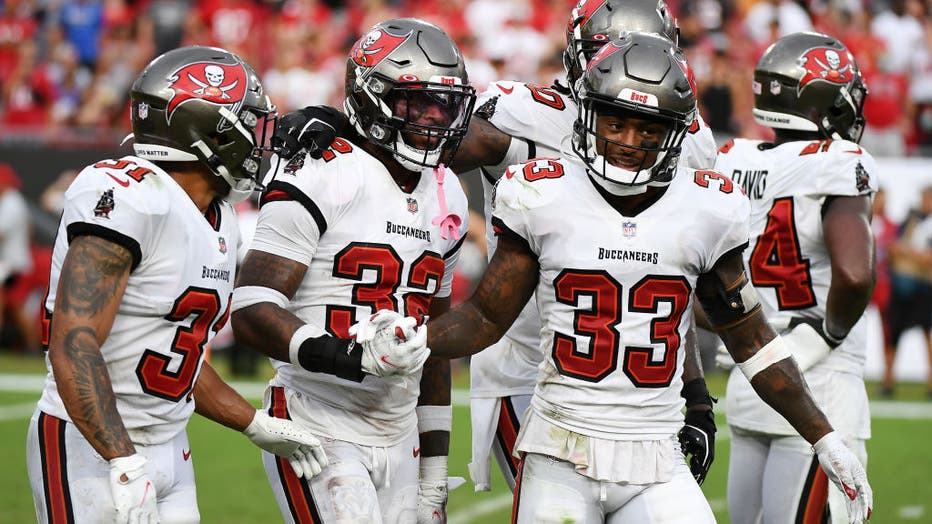 TAMPA, FLORIDA - SEPTEMBER 19: Mike Edwards #32 of the Tampa Bay Buccaneers is congratulated by teammates after returning his second interception for a touchdown against the Atlanta Falcons in the fourth quarter of the game at Raymond James Stadium o

Ryan, who tossed TD passes to Calvin Ridley and Cordarrelle Patterson before running for a 2-point conversion to trim an 18-point deficit to 28-25 late in the third, threw a pair of interceptions that Mike Edwards returned for fourth-quarter TDs that broke the game open.

Since trailing the Falcons 17-0 at halftime of their Week 15 meeting in Atlanta last December, Brady has thrown for 11 touchdowns vs. one interception in guiding the Bucs to three victories in a series that’s seen Tampa Bay win four of the past five meetings.

Gronkowski, who spent nine seasons with Brady in New England before coming out of retirement to rejoin his long-time teammate with the Bucs last year, scored on receptions of 20 and 1 yard in the first half.

Brady’s fifth TD pass — a 12-yarder to Chris Godwin with just over nine minutes remaining, put the Bucs over 30 points for a ninth straight game. Edwards scored on interception returns of 31 and 15 yards to finish the rout.

Brady completed 24 of 38 passes without an interception. He was sacked three times, losing a fumble on one of them.

Ryan finished 35 of 46 for 300 yards, two touchdowns and three interceptions.

Former Bucs defensive coordinator Monte Kiffin was inducted into the team’s Ring of Honor during a halftime ceremony.

Kiffin, credited with being architect of the Tampa 2 scheme, led the Tampa Bay defense for 13 seasons from 1996 to 2008. He joins four defensive stars from the 2002 Bucs, who won the Super Bowl — Derrick Brooks, Warren Sapp, John Lynch and Ronde Barber — as members of the Ring of Honor at Raymond James Stadium.

Buccaneers: CB Carlton Davis III played after being listed as questionable with a sore hamstring. ... WR/KR Jaydon Mickens left with a hip injury in the second half.

Falcons: Will try to break a seven-game skid at the New York Giants next Sunday.

Buccaneers: Travel to the West Coast to face the Los Angeles Rams on Sunday in the first of two straight road games. Brady returns to New England to face the Patriots for first time the following week.