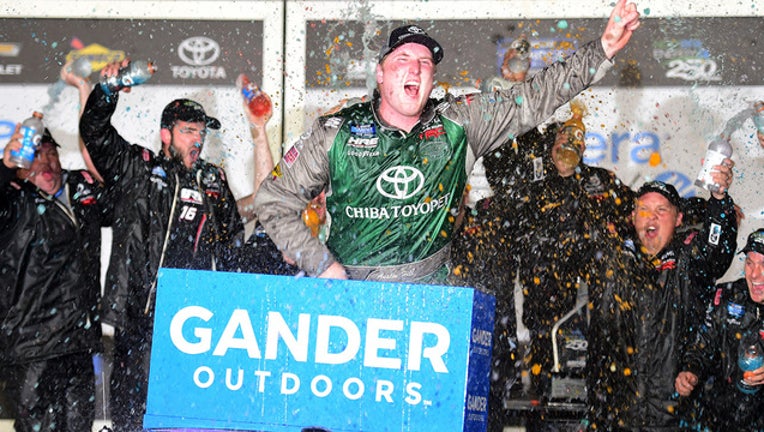 With only nine of the 32 trucks still running in the second overtime, Hill had to block Grant Enfinger for most of the final lap. He needed a last big, bold maneuver to hold off Enfinger as they rushed toward the checkered flag.

"When we went overtime, man, I was just so scared. So much stuff was running through my head," Hill said. "That whole last lap my heart was pounding. I thought they were going to get to my outside and make it a drag race. I never thought in a million year I would win at Daytona."

Team owner Shige Hattori released Moffitt and signed Hill, who had some financial backing, in early January. The 24-year-old won for the first time in 52 career Truck Series starts and Hattori has won three straight dating to last season.

Enfinger finished second and summed up the race as "carnage everywhere."

Ross Chastain was third, followed by Spencer Boyd and Matt Crafton. Angela Ruch, the niece of 1990 Daytona 500 winner Derrike Cope, finished eighth. She and Natalie Decker both made the Truck Series opener and are the only two women racing at NASCAR's national level on opening weekend.

Ruch's finish is the second-highest for a female driver in the Truck Series, trailing Jennifer Jo Cobb, who was sixth at Daytona in 2011.

Decker's national debut ended just two laps into the race when a flat left front tire caused her truck to catch fire. She drove it to pit road as flames shot from under her hood and crew members helped pull Decker from the truck. One used a little too much force as he shoved Decker out of the way and she stumbled over the pit wall.

Decker is trying to race in five different series this season, and Daytona was the first of 12 scheduled Truck Series races.

A crew member was struck on pit road by driver Bryan Dauzat during that hectic early caution. Dauzat had lost his brakes and warned his team over his radio he wasn't going to be able to stop, and jackman Billy Rock was hit as he crossed in front of the truck.

The impact sent the crew member sprawling to the ground, but he was awake and alert as he was transferred by ambulance to a nearby hospital.

The series opener featured three-wide racing that stretched five or more rows into the field, but it contributed to the race-record 11 cautions that eliminated all the top contenders.

Marcus Lemonis, CEO of Truck Series title sponsor Gander Outdoors, offered financial incentives to the competitors in the pre-race driver meeting. Lemonis, star of "The Profit" on CNBC, pledged an additional $10,000 and a travel trailer to the Daytona winner. He also promised a $100,000 bonus to the championship-winning crew as well as other incentives for the upcoming season.

"How come we're not more fired up tonight? Are we fired up?" Lemonis said to the competitors.