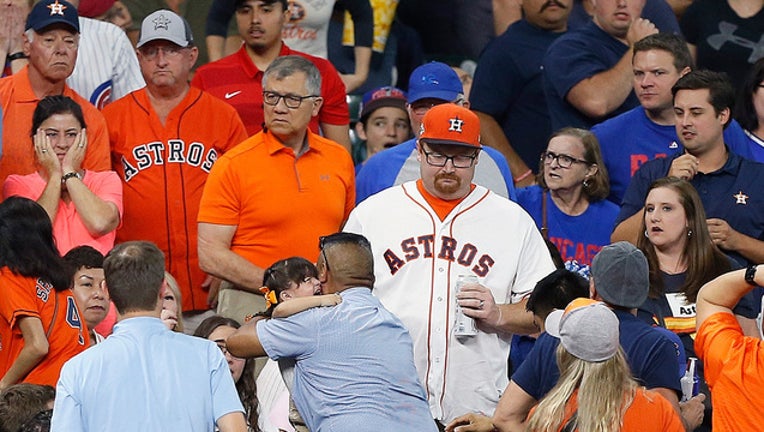 HOUSTON (AP) - An attorney for the family of a 2-year-old girl struck by a foul ball during a game last month between the Chicago Cubs and Houston Astros said Wednesday that the girl suffered a skull fracture.

Attorney Richard Mithoff provided the first update by the girl's family on her condition since she was hit during the May 29 game in Houston.

Mithoff said the girl had bleeding and swelling in her brain as well as a brain contusion after she was hit. He said she had a seizure after she was hospitalized and is taking medication to prevent more seizures. The girl was injured when Cubs outfielder Albert Almora Jr. hit a fourth-inning line drive into the stands down the third base line.

Like all major league stadiums, Minute Maid Park has netting to protect fans near the field from foul balls. On the third base side in Houston, it extends to the end of the visiting team's dugout. In a statement released Wednesday, a spokeswoman for the family said they were sitting one section away from where the netting ends at Minute Maid Park.

The Astros declined comment on the situation on Wednesday.

Almora was extremely shaken up by the incident and close to tears in the moments following the girl being hit. He has declined talking about it since that night, but after the game when asked if the protective netting should be extended, he said: "Right now, obviously, I want to put a net around the whole stadium."

On Wednesday Cubs manager Joe Maddon said he understands why Almora doesn't want to talk about it anymore, and that he hopes the girl recovers quickly. He was asked about the possibility of extending the netting to protect more fans.

Following recommendations from Major League Baseball, by the start of the 2018 season all 30 teams had expanded their protective netting to at least the far ends of the dugouts after several fans were injured by foul balls in 2017.

But the extension of the netting hasn't stopped fans from being injured. On Sunday a young girl was taken to a hospital for precautionary tests after she was hit in the head by a foul ball hit by Los Angeles Dodgers star Cody Bellinger. The girl was sitting four rows from the field along the first-base line, just beyond the netting that extends to the end of the visiting dugout. The team said earlier this week that they're studying how to improve the netting in the wake of the incident.

A woman died last August after being struck in the head by a foul ball at Dodger Stadium.

In Chicago, the White Sox plan to become the first team to extend the protective netting to the foul poles, planning to take the step at Guaranteed Rate Field after a female fan was struck by a ball hit by Eloy Jimenez on June 10.