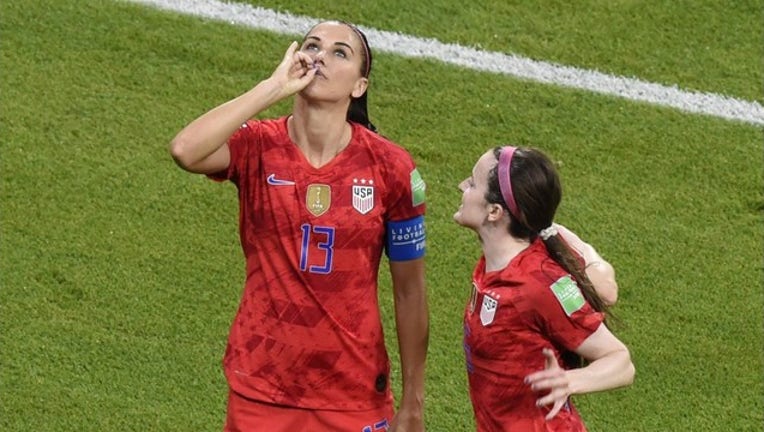 FOX NEWS - U.S. women's soccer star Alex Morgan said Friday she was taken aback by the amount of criticism she received from her goal celebration against England, claiming it shows there is proof of a double standard.

Morgan scored the go-ahead goal - her sixth of the tournament - on Tuesday in the Women's World Cup semifinal match against England. She pretended to sip tea after scoring the goal. The celebration was perceived by many as mocking England, given the country's fondness for tea.

"My celebration was actually more about ‘that's the tea,' which is telling a story," she told The Guardian. "You know, spreading the news. So it wasn't a hit to England in any way."

Morgan then went onto explain how the criticism the women's national team has been receiving amount to a double standard when it comes to male athletes.

"I feel that there is some sort of double standard for females in sports to feel like we, you know, have to be humble in our successes and have to celebrate but not too much and have to do something, but it always has to be in a limited fashion.

"You see men celebrating all around the world in big tournaments, grabbing their sacks or whatever it is and when I look at sipping a cup of tea, I'm a little taken aback and kind of … You have to laugh about it, to see all the criticism."

Morgan's comments come two days after her teammate Megan Rapinoe defended her. Rapinoe was asked Wednesday whether she had a response to the criticism.

"I mean it's like we're at the World Cup. What do you want us to do? This is the biggest stage, the biggest moment. I don't think anyone truly believes that we disrespect the game or disrespect our opponents. We have the utmost respect for England and every team that we've faced, and every team that we will face forever and ever. That's just part of the DNA of the squad.

"… We work hard, we like to play hard and we like to have fun and enjoy ourselves and these are the absolute biggest moments to do that.

"I expected Alex to grab a goal, but I'm not that happy with that celebration," Lianne Sanderson, a former member of England's national team, said on BeIN Sports. "You can celebrate however you want, but that for me is a bit distasteful. … I could be wrong, but it's based upon playing against England, and we love our tea."

Faye White, who is a former captain on the English national team, slammed Morgan over the tea gesture on "Good Morning Britain."

"I wish I was on the pitch to put in a tackle," White said.

On the tea celebration, Morgan told reporters after the match she just wanted to keep things "interesting."

The U.S. will play the Netherlands in the Women's World Cup final at 11 a.m. ET.