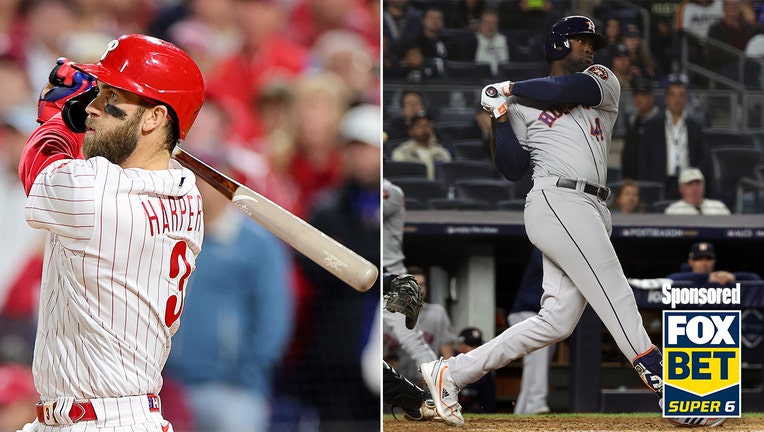 The Houston Astros and Philadelphia Phillies square off in the World Series and you'll have a chance to win a whopping $25,000 playing FOX Bet Super 6.

You can catch all the World Series action on FOX beginning at 8 p.m. ET on Friday, but before the first pitch, be sure to download the FOX Bet Super 6 app and enter for your chance to win $25,000.

It’s fast, FREE, and all it takes is downloading the FOX Bet Super 6 app on your phone or mobile device.

And if you need help, I'm here to guide you through it. So let's have some fun and break down the contest's questions.

How many total runs will be scored in the game?

Because I expect both starting pitchers to go deep into Game 1 to save bullpen arms for later, that assumption means a lower-scoring contest. However, with two of the top five offenses in expected batting average playing, I’ll split the difference and go with 8-9 runs.

Which team will throw the most strikeouts and how many will they have?

No bullpen has more strikeouts per nine innings than the Astros. While the Phillies are not far behind, I expect more swings from Philly hitters to try and capitalize on the shallow parts of Minute Maid Park. It’ll be the Astros with nine strikeouts.

Which team will have the most hits and how many will they have?

At some point, I will credit the Phillies for being likelier to have better iso numbers. Still, Astros sluggers are likelier to string singles and doubles together, hit for average and end with more hits than the Phillies. Eight should be a safe number.

Which team will have the most combined individual baserunners left on base and how many will they have?

One place where the Astros have struggled is base running. Extra Bases Taken Percentage accounts for how often base runners can turn singles into doubles and doubles into triples. Houston ranks third from the bottom. I expect Game 1 to be close only because Houston isn’t hitting more runners home. Take the Astros with 5-6.

Which team will have the most at-bats and how many will they have?

The answer is Houston because I expect they will strand more baserunners. However, be careful here because at-bats and plate appearances are different. The Astros could accrue more walks which do not count as at-bats. A lower number is still ok here, so I’ll take 31.

The Astros by one run. No need to overthink what tends to happen in postseason games.

Open your FOX Bet Super 6 app and make your selections before Friday's game starts. Remember to tag us across all social media platforms at @FOXSuper6 and @EricaReneeD and show us your picks using the #EricaSuper6 hashtag!