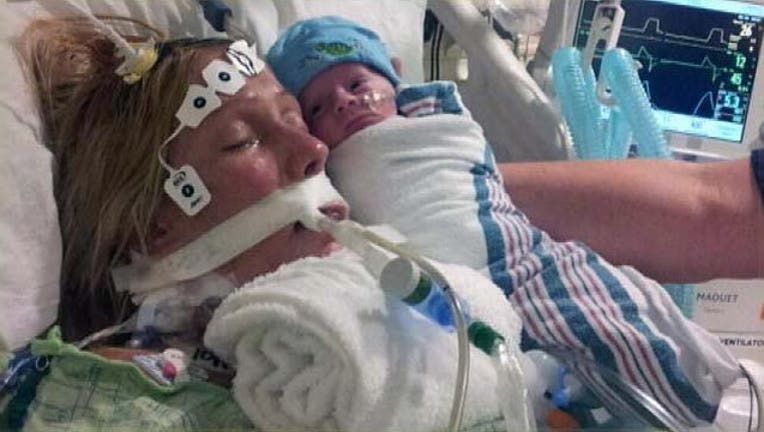 Just last month, Marla Wallach was beautiful, vibrant, and 7-and-a-half months pregnant with a daughter and a son.  Now, the 44-year-old woman in a medically-induced coma, and her future uncertain.  She is also a new mom, though doctors say she has no idea.

"To wake up, have a breathing tube in your mouth, and then to try to tell her even though she doesn't remember, that she was pregnant?  I can't even wrap my mind around it," said fiancé Mike Wilson.  "It's terrible. For lack of a better word, it's hell."

Though they are from Orlando, they had flown to San Francisco last month to visit family.  The day after they arrived, Marla suffered an aneurysm in her head.  Doctors believe the pregnancy and the cross-country flight are not to blame.

Being away from family and friends makes this crisis even more difficult for Mike, who said that even if Marla could be transported back to Central Florida, their insurance plan would not cover the costs.  They also do not have long term care insurance.

For now, Mike is focused on his son, Simon.  Born at 31 weeks, he is doing well enough to soon be discharged.

"We're not trying to be selfish, but she would do better and have a more positive outcome back home.  This isn't, 'God put us here for a reason.'   I think we need to get back home!"

Back home where family and friends are waiting.

Marla works as a stylist at Panacea Day Spa in Longwood, where friends are organizing a fundraiser to try to help the family.

"It's very sad, very sad," one of her colleague and friends, Kayla Walker said, almost breaking down into tears.   "I just pray she comes out of it."

Mike said doctors do not know Marla's prognosis.  The fact that doctors don't know what's to come is enough to allow everyone to still hope, Mike said.