WASHINGTON - President Donald Trump’s doctor expects him to “safely return” to public engagements on Saturday following his COVID-19 diagnosis, according to a memo from the physician.

Navy Cdr. Sean Conley, Trump’s doctor, said the president has responded “extremely well” to treatment. Conley said Saturday will be day 10 after Trump’s diagnosis, and he “fully anticipates” Trump will be able to safely return to public engagements, such as campaign events or receptions held at the White House.

The memo, sent Thursday, added that Trump has completed his course of treatment and his physical exam “has remained stable and devoid of any indications to suggest progression of illness.” 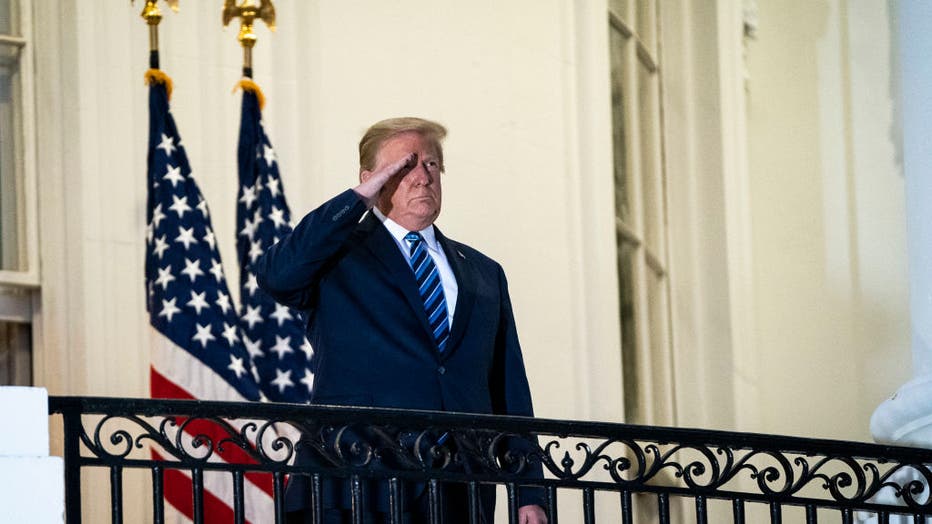 President Donald J. Trump salutes to Marine One from the Truman Balcony as he returns home after receiving treatments for COVID-19 at Walter Reed National Military Medical Center, at the White House on Oct. 5, 2020 in Washington, D.C. (Photo by Jabin

Most people with mild to moderate COVID-19 can stop isolating and be around others about 10 days after they first showed symptoms, according to the U.S. Centers for Disease Control and Prevention. That's provided their symptoms have improved, they have not had a fever for 24 hours and are no longer on any medication to reduce a high temperature.

The president was discharged from Walter Reed National Military Medical Center on Monday following a three-day stay. Since his return to the White House Monday evening, only a few staffers — and no reporters — have laid eyes on the president, who has announced updates on his condition via Twitter.

In a video posted Wednesday, Trump credited an experimental antibody cocktail from Regeneron Pharmaceuticals for his improved condition and promised to make the drug “free” for all Americans.

“To me, it wasn’t therapeutic, it just made me better. I call that a cure,” Trump said in a video posted on Twitter that was recorded in the Rose Garden. “I want everybody to be given the same treatment as your president, because I feel great.”

Trump received the experimental antiviral cocktail made by Regeneron through a “compassionate use” exemption. The safety and effectiveness of the drug have not yet been proven.

Regeneron is seeking emergency use authorization from the Food and Drug Administration and submitted an application this week.

During a telephone interview with FOX Business, Trump said earlier Thursday: “I think I’m better to the point where I’d love to do a rally tonight.” He also said, “I don’t think I’m contagious at all.”

Meanwhile, the final presidential debates between Trump and Democratic nominee Joe Biden were thrown into uncertainty Thursday as the campaigns offered dueling proposals for the remaining events.

Following concerns about Trump’s infection, the Commission on Presidential Debates announced the next town hall-style debate set for Oct. 15 in Miami would be held virtually.

The president said he wouldn’t participate if the debate wasn’t in person. Biden's campaign then suggested the event be delayed a week until Oct. 22, which is when the third and final debate was already scheduled.

Trump then countered again, agreeing to a debate on Oct. 22 — but only if it’s face-to-face — and asking that the third debate be moved to Oct. 29, just before the election. But Biden's advisers rejected squaring off that late in the campaign.