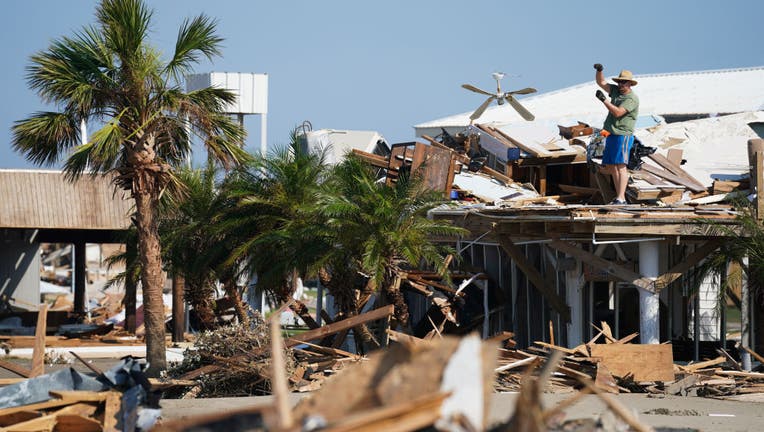 A man tosses a ceiling fan from a family member's storm-damaged house after Hurricane Ida on Sept. 4, 2021, in Grand Isle, Louisiana. (Photo by Sean Rayford/Getty Images)

ORLANDO, Fla. - Despite an unusually quiet August in the tropics in 2022, there is still plenty of hurricane season to go with the typical peak in September and October.

But as residents keep a wary eye on the Atlantic Basin for any developing systems, new research shows which states are most at risk for costly damage from such destructive storms.

And it may surprise you to find Florida is not atop the list. Instead, Louisiana is No. 1 on the list of states with the greatest hurricane risk per capita, with damages during a typical hurricane season expected to cost an average of $107 per resident.

Louisiana has been hit particularly hard by hurricanes in recent years, with last year's Hurricane Ida causing $75 billion in damage alone after suffering four direct hurricane strikes along its coast in 2020.

Neighboring Mississippi ranks No. 2, with damages to buildings and the population expected to cost $78 per resident.

Texas comes in at No. 3, where damages are projected to amount to $58 per person. Its hurricane risk was highlighted in 2017 when Hurricane Harvey caused nearly $150 billion in damage. Texas did rank No. 1 in overall expected damage at $1.5 billion in a given hurricane season.

Florida has the most tropical cyclone-related events but is ranked No. 4 with an expected $36.49-per-person damage bill each season.

North Carolina rounded out the top 5 with $31.93 in losses per person.

Car owners most at risk of losing vehicles during hurricanes

MoneyGeek's research also found that some states' residents are at the greatest risk of being left without a vehicle after a hurricane due to a lack of insurance coverage.

Comprehensive coverage is optional but would pay for any repairs or damages sustained during a tropical cyclone.

"The things that come with hurricanes, such as wind," Matt Christopher, vice president of claims and shared services at Clearcover Insurance, told FOX Weather.  "Wind is going to knock down branches and damage your vehicle. That’s when your comprehensive would come into play."

The other coverage that really can come into play with hurricanes is collision insurance.

"Think about hurricanes, there’s a lot of rain, and it could cause slick roads, and you could lose control," Christopher said. "You could strike another vehicle or a tree or a rock. And that’s when collision can come into play."

Christopher said that insurance companies couldn’t retroactively provide coverage after a storm, so you must be ready before hurricanes make landfall.

"Make sure you have the proper coverage in place because preparation is absolutely key," Christopher said. "You need to have this coverage ahead of a storm."