Imagine going out to your car in the morning and finding it elevated on blocks, with the tires stolen.

KISSIMMEE, Fla. - If you park your new car outside -- especially if it's a Toyota Corolla -- deputies say watch out: thieves could be out for your wheels.

Two of the latest cases happened at the Niido Apartments in Kissimmee. Joao Paulo Rodrigues woke up early to bring his son to the doctor when he noticed his wheels missing.

“When I go out with my son, he has the flu, me and my wife trying to put him and go to the hospital. And I saw my car without the four wheels,” Rodrigues said, “I'm in shock.”

The thieves left the car - a new Corolla - standing on cinder blocks, with the back end lying on the brake rotors. “My brake disc has a problem here because it stayed on the floor. Look at this, hm?” Rodrigues said, pointing out the damage. 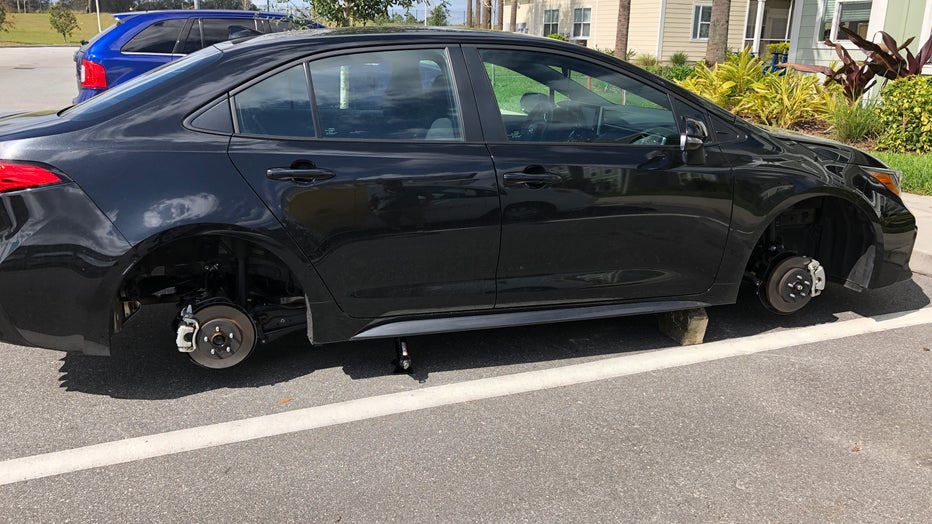 Just down the parking lot was another new Corolla, also with missing wheels. Osceola deputies say they've seen ten of these cases since last October, all of them 2019 and 2020 Toyota Corollas. Jeff Beaty at Sloan's Automotive said what the thieves were after.

“They're not actually after the tires themselves, they're after the wheels,” Beaty said.

He says the best way to keep your wheels on is to get locking lug nuts. There are a few different types, but both require special keys to remove the wheel and cost around $40. That's small compared to the cost of replacing your wheels, Beaty said.

“If you go buy a factory wheel from the Toyota dealer it's gonna cost per wheel maybe $300-400 dollars.”

Aside from locking lug nuts, deputies also recommend parking in well-lit areas and reporting any suspicious vehicles. They're asking anyone with information about these thefts to please call CrimeLine at (800) 423-TIPS (8477).