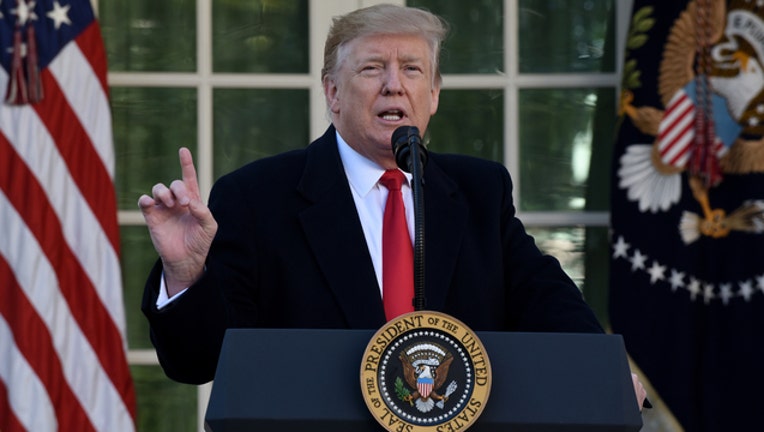 President Donald Trump makes a statement announcing that a deal has been reached to reopen the government through Feb. 15 during an event in the Rose Garden of the White House in Washington, DC. (Photo by Olivier Douliery-Pool/Getty Images)

That's the approach advisers say Trump will take in his first State of the Union address delivered under divided government. A president who's mocked everyone from women to the U.S. intelligence community, foreign leaders and members of Congress is expected to speak Tuesday night of setting aside hard feelings and moving forward.

For an idea of how that goes over, keep an eye on House Speaker Nancy Pelosi, seated behind him and over his shoulder, and the record number of women and minorities who dot the audience after the November 2018 elections. And listen for how enthusiastically Republicans applaud Trump's outreach.

What else to watch as Trump addresses the nation at 9 p.m. EST.

Everything about the event, including the date, is framed by the longest government shutdown in history. Pelosi suggested Trump postpone the scheduled Jan. 29 speech until the government reopened. Trump, who commands the armed forces, then put off Pelosi's trip overseas on a military plane. She then formally yanked the welcome mat by refusing to hold a vote to allow Trump to address a joint session of Congress.

The tug of war ended Jan. 25, when Trump lifted the shutdown without getting new money for the wall he wants to build on the U.S.-Mexico border. Pelosi then re-invited Trump to deliver the address on Tuesday and he agreed.

Trump has vowed to get his border wall and has threatened to declare a national emergency to pay for it without Congress' approval.

Hours before the speech, he was belittling Senate Democrats and complaining about the press.

The pomp begins the moment House Sergeant-at-Arms Paul Irving yells from the back of the chamber, "Madam Speaker, the president of the United States!"

Trump will then walk down the center aisle flanked by Republican leaders, shaking hands with many of the lawmakers who grabbed seats earlier in the day in hopes of making it into photos and video with the president. Republicans will burst into raucous hoots and applause.

Not likely to extend a hand to Trump: The star of the Democratic freshmen, Rep. Alexandria Ocasio-Cortez of New York.

"But I'll be there and I'll be present to see and listen to what's going on," she told TMZ.

WHO'S IN THE ROOM

It's a rare moment when members of the three separate and co-equal branches of government meet under the same roof.

The night's key visual will be Pelosi sitting behind Trump along with Vice President Mike Pence. All 535 members of Congress are invited, along with members of Trump's Cabinet and the justices of the Supreme Court, led by Chief Justice John Roberts.

The balcony tells its own story. To the left, Trump will nod to first lady Melania Trump and the administration's guests. Seated elsewhere in the gallery will be lawmakers' invited guests, many chosen to send messages reinforcing each party's agenda. This year the guests include people who have suffered because of the shutdown and those pushing for tougher immigration laws.

Seated with Melania Trump will be a woman freed from federal prison after Trump reduced her life sentence for drug offenses and a Delaware boy reportedly bullied because his last name is Trump.

Alice Marie Johnson, 63, served more than two decades of a life sentence without parole before the president commuted her sentence last year. Joshua Trump, a middle school student, also will be seated in with the administration's 13 guests.

At the other end of the House chamber, members of Pelosi's family will sit with the president of Planned Parenthood, active-duty transgender service members and Fred Guttenberg, the father of a Parkland, Florida, student who was killed by gun violence.

Melania Trump will head to the State of the Union about 40 minutes ahead of her husband again this year to spend time with her guests.

Spokeswoman Stephanie Grisham says the first lady escorts the guests to help put them at ease and so they have time to look around the Capitol.

Trump and his wife returned to the White House together after the speech.

It's not just the name of a television show. By tradition, one Cabinet secretary is closeted away at a secure, undisclosed location to ensure continuity of government in case disaster strikes while government leaders attend the speech.

But Trump's choice this year could be limited by the number of "acting" secretaries in the Cabinet. Only Senate-confirmed secretaries (and natural-born citizens) in the line of succession to the presidency can assume control of government in a crisis.

WHAT'S HAPPENING IN THE AUDIENCE

Look for women on the Democratic side of the aisle wearing white, the color favored by early 20th century suffragettes and now worn by those who want Trump to easily spot his new opponents. Listen for boos, hisses or silence from the newly empowered Democratic side when Trump speaks. Note whether Trump can raise everyone's gaze and hit feel-good themes that inspire both sides to applaud.

For instance, who's against "unity?" Both Trump and Georgia Democrat Stacey Abrams, who will deliver the rebuttal, have used that idea to preview their remarks.

Nearly a dozen Democrats who dream of succeeding Trump serve in Congress. They will be sizing up the president and each other as well.

Watch the body language among the would-be Democratic presidents: Who's talking to whom, who gets or gives a hug or a kiss, whose heads are bowed in hushed conversation. Also watch their body language toward Trump. Cameras will be trolling the audience - and the presidential dreamers know it - to see if they can be caught responding with an eye roll or head shake.

Senate Democratic leader Chuck Schumer chose Abrams to deliver the rebuttal in a nod toward the black women who anchor the Democratic Party. Doing so elevates her among Democrats as the leaders woo Abrams to run for the Senate.

Abrams also will provide a contrast with Trump, who has a history of making racially inflammatory remarks.

Abrams is filling a role that for others has proven thankless and generated brutal reviews. Republican Sen. Marco Rubio's lunge for a water bottle became a meme after he delivered his party's response in 2013. Then-Louisiana Gov. Bobby Jindal, a Republican, was panned for being dull in 2009.